A wee treat if you are an Outlander fan - I've just found that an Outlander family tree is available at http://content.randomhouse.com/assets/9780440246442/view.php?id=ohb001, as part of the extended ebook content for the eighth book in the series, Written in My Own Heart's Blood. It can be downloaded in PDF format from the link. 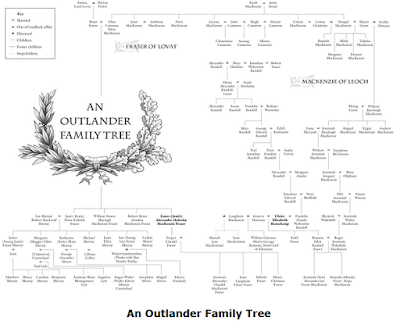 Outlander starts off as a fantasy time travel series involving an English nurse who mysteriously travels back in time through a stone circle near Inverness to the year just prior to the 1745 Jacobite Rising in Scotland. It is currently being produced as a television series, and just last night I finished watching the last episode of the second series on Amazon Prime. It is unfortunate that a series that is providing Scotland such worldwide attention has still yet to be broadcast terrestrially in our own country, despite being filmed here and set here, but if you have yet to see it, it is well worth getting it on DVD/Blu-Ray, or watching it on Amazon. It is of course a fantasy series - and has occasional hiccups on the historical front! - but I have yet to meet a genie that hasn't become a fan.

My three times great gran was a Fraser from Inverness, Janet or Jessie Fraser, who lived from about 1816 to 8 MAY 1860. Sadly she committed suicide by throwing herself into the Caledonian Canal, following the death of her own daughter, who tragically died whilst giving birth. Janet was buried in an unmarked grave, and had no parental details recorded on her death record, making her a current brick wall in my research. I still have a few threads to pull on, however, so haven't given up the ghost yet - I'll let you know in due course if I find a connection to Lallybroch...! :)

Incidentally, if you want to take a look at the real family tree of Fraser of Lovat, there are plenty of good references online - see https://archive.org/stream/historicalaccoun1825ande#page/62/mode/2up for example.

For details on my genealogy guide books, including A Beginner's Guide to British and Irish Genealogy, A Decade of Irish Centenaries: Researching Ireland 1912-1923, Discover Scottish Church Records (2nd edition), Discover Irish Land Records and Down and Out in Scotland: Researching Ancestral Crisis, please visit http://britishgenes.blogspot.co.uk/p/my-books.html.
Posted by Chris Paton at 00:19