I'm just back from a thoroughly enjoyable two days in Inverness, where I attended the third Scottish Genealogy Network Continuous Professional Development day, which was held at Highland Archive (www.highlandarchives.org.uk). Once again I came away buzzing with new tips, trick and knowledge on a range of subjects of interest to me as a professional genealogist.

The venue for the event was the relatively new Highland Archive, based on the river to the west of the city centre, and this was the first time I have visited the new facility, having last used the archive when it was housed within the city's library. Unlike previous CPD sessions with the SGN, due to the distance many of us had to travel, it was decided to have a two day event this time - the first day on Friday being a visit to, and guided tour of, the archive and family history centre (housed within the same building), followed by the CPD talks sessions on Saturday. 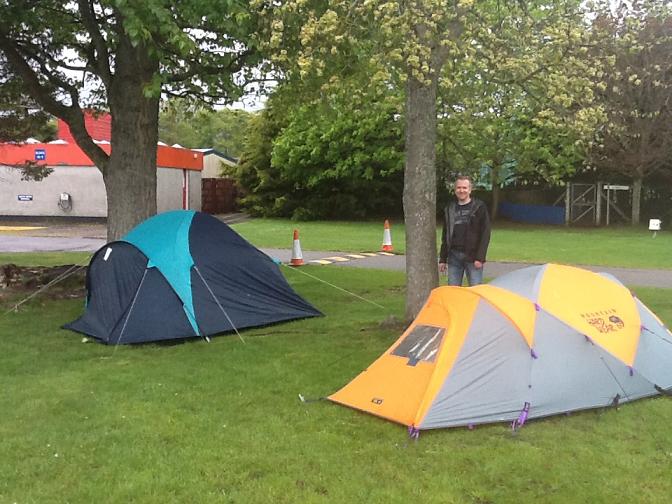 Before all of that though, my first mission was to pitch my tent at the Bught Road Camping Park, literally next door to the archive. Yup, geneacamping featured heavily this weekend! Myself and Ali MacDonald of the Scottish DNA Project and the University of Strathclyde had decided that we were going to camp for the two nights, rather than use B&B accommodation, although we did not exactly pick the weather for it! It was a great site though, and unbelievably convenient for the archive - a 2 minute walk away. From a personal family history point of view, it was also a perfect spot to be based - on the river before us were the Ness Islands, where my four times great uncle James MacGillivray used to be the keeper in the late 19th century, though this was also the same river where one of my great great grandmothers, Janet MacGillivray (nee Fraser) had committed suicide in 1860. On the other side of the river was the old house of my great great grandfather John Brownlie MacFarlane, where my grandfather Charles Paton also briefly lived for a couple of years as a child, and on the far side of the road behind the campsite was Tomnahurich Cemetery, where many of my lot are buried. Just up the road was Dores, where my MacGillivray and Cameron ancestors originated. This was the heartland of a good part of my Paton family history! 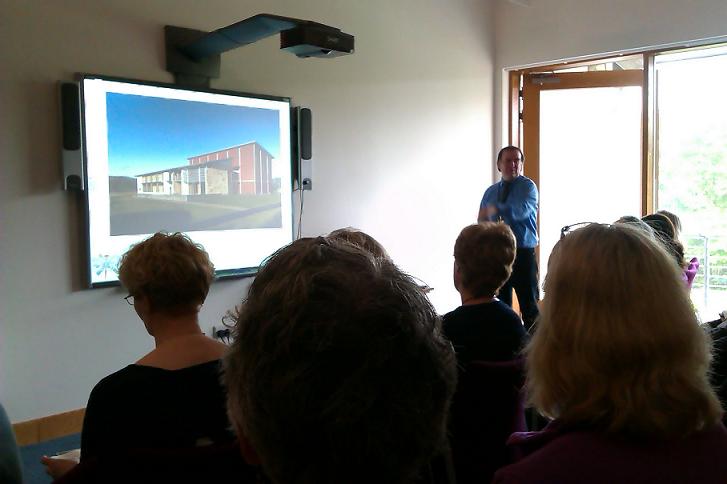 Organising the visit and CPD event for the SGN this time was Chris Halliday, one of our founding members, and who a year ago was appointed family history officer at the Family History Centre. Chris greeted us with a brief overview of the set-up in the building, before we were then taken to meet a local registrar (also based in the centre), who discussed the civil registration records she has to deal with, as well as current practice. I had an interesting chat with her afterwards, with a couple of interesting points mentioned in our discussion. The first was to note that it is possible to access locally held copies of BMD records post 1855, using their paid for research service. There are many reasons why this might be handy - for example, from 1864-1948 vaccination information was recorded in the margins of the local copies of birth registers but not in those sent to Edinburgh and the GROS (with birth entries marked either as 'vaccinated' or 'insusceptible') - hence why you don't see the info on ScotlandsPeople for the most part. The other interesting note was that apparently marriage schedules, filled in prior to a marriage and from which information is extracted into a marriage register after the event, do apparently survive at the GROS, where they can be used as evidence in court cases - for example, involving bigamy - though these are apparently not accessible to the public. I had previously thought that they had been destroyed, but I've been assured this is not the case.

We then ventured into the family history centre and the archive. The two facilities are adjacent to each other, although the opening hours are slightly different, with the archive usually closed, to the public on Fridays, for example. We started with the family history centre, which houses four terminals providing access to the ScotlandsPeople Centre computer system, at which you can gain unlimited access each day for £15 (as you would in Edinburgh) - something that is seemingly still relatively unknown about in the Inverness area, so if you live in the region, it's there for the using! Also available were censuses, OPRs and other microform resources, as well as a library of books on a range of subjects - everything you would hope for in what seemed to be a fairly modern and bright environment. 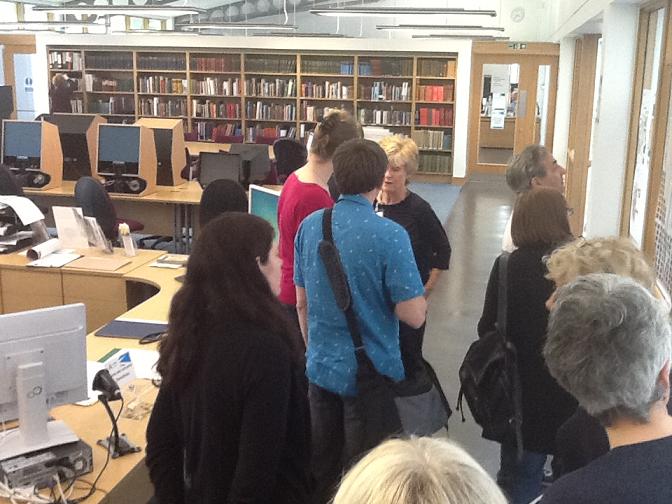 Following this the archive team very kindly showed us behind the scenes at their facility in the next room, which included a brief discussion in the conservation area with the archive's conservation officer about the work undertaken there both for the archive and for additional income for the archive service from private commissions. We were also shown the storage area behind the scenes in a 3 floor base archive, and then invited to examine some representative documents and records sources, some commonly used, some less so, such as drivers' registration details in Inverness from the early 1900s. 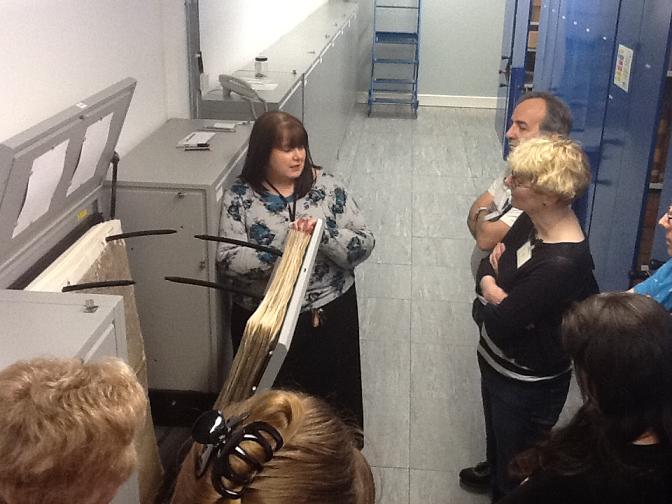 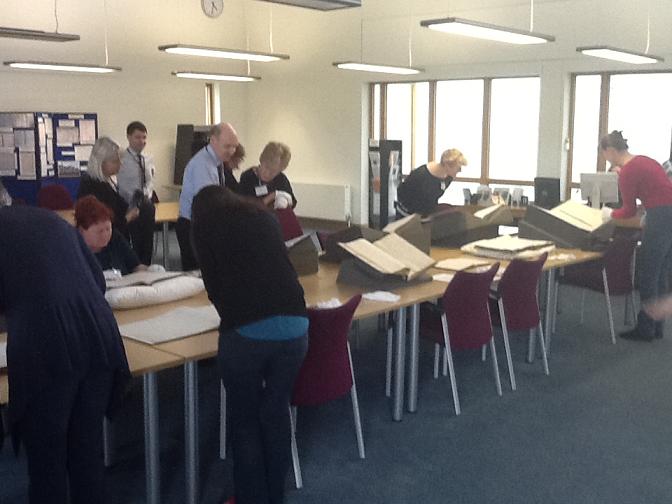 In the evening several members hit the town, with a few drinks at Gellions and Hootananny, before calling it a night. 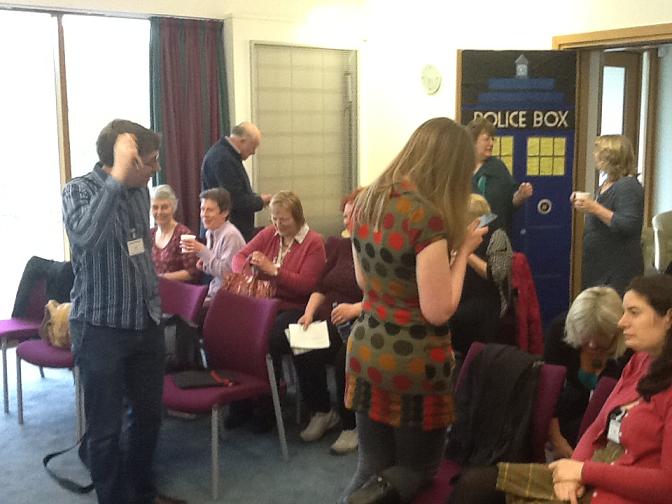 On Saturday then, we convened at 10.30am for the first talk of the day from Michael Tobias on data extraction and how to manipulate information that has been sourced online, before Graham Maxwell gave a cracking talk on the use of sheriff court records - more specifically with reference to 19th century paternity cases that he and his wife Emma have been indexing for the Borders counties (see their site at http://maxwellancestry.com/ancestry/resources/courtsearch.aspx for the searchable database).

After a break it was then Kirsty Wilkinson's turn, providing a discussion on her dissertation topic for her recent masters degree at Strathclyde, which was based on Edinburgh Army Attestations Registers held at Edinburgh City Archives, a fascinating resource (held at the the archive under SL54). Lorna Kinnaird then spoke about a recent First World War education project that she has been involved in with Buckstone Primary School, which included a successful visit by the pupils to the NRS in Edinburgh.

Following lunch Ali MacDonald then gave a talk on Scottish DNA - as it is a topic we all have some basic knowledge of, he concentrated his session mainly on the growing use of SNPs (single nucleotide polymorphisms) in Y-DNA research, predicting that within 5 years it will become as important as the present use of STRs (short tandem repeats), as more and more SNP markers are located. Ali and Strathclyde have been involved in a DNA project concerning the Battle of Bannockburn, which will form part of an exhibition in the very near future at the visitor centre there, and which I hope to attend the launch of soon (see http://britishgenes.blogspot.co.uk/2014/04/battle-of-bannockburn-family-history.html). This was a particularly useful session in that I had remarked last week in a talk in Ontario that I felt that DNA was one subject that was beginning to slip from me, as it is evolving so fast as a field. The session then ended with a brief Excel tips and social bookmarking session from Jean Dickson, where I learned about the delicious.com site for bookmarking, and then a talk from Judith Russell on three Lord Provosts from Glasgow and their role in the First World War and during the Red Clydesiders period in the city.

A curry was eaten by most of us in the evening after the event, followed by a few more drinkies at Hootanannys, and as proceedings ended I made my way back to my tent for a final night's kip before returning home early this morning (driving from Inverness to Largs in three and a half hours, a personal best!). 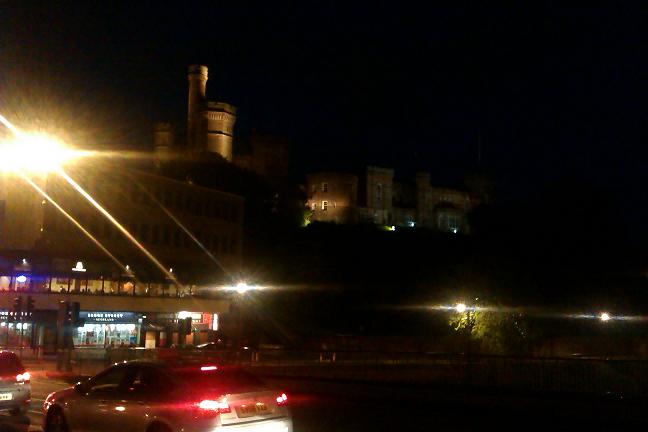 Once again the Scottish Genealogy Network has proved its worth to the professional genealogy community in Scotland - we had some 25 attendees, and some excellent sessions, but above all, some great chances to network. The SGN exists as an informal group to promote CPD and networking between ourselves, to help all of us up our game and to keep pace with the many changes that face us in a rapidly changing profession. If you work professionally in a genealogy related business, and would like to know more, please visit the SGN site at http://scottishgenealogynetwork.blogspot.co.uk.

Finally, a huge thanks to Chris (and happy birthday matey!), to all the speakers who participated, to the staff at Highland Archive, and to Ali for the spare tent pegs! Roll on the next CPD event soon... :)

Damn - I forgot to mention the delicious cupcakes...! 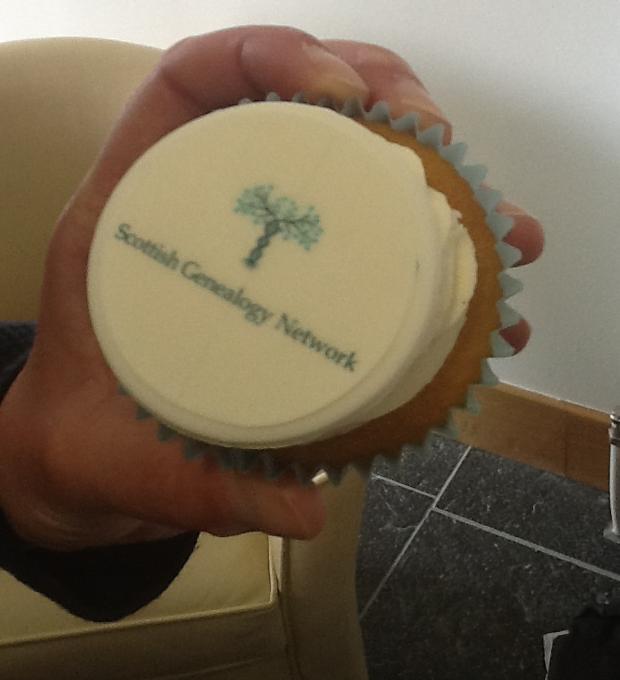 UPDATE: Emma Maxwell, the secretary of the Scottish Genealogy Network, has also blogged on the SGN blog about the event - the account is available at http://scottishgenealogynetwork.blogspot.co.uk/2014/05/third-scottish-genealogy-network-cpd-day.html

Now available for UK research is the new second edition of the best selling Tracing Your Family History on the Internet: A Guide for Family Historians. And for those wishing to take Scottish ancestral research a bit further, my next Pharos course, Scotland 1750-1850: Beyond the Old Parish Records, commences May 14th 2014.
Posted by Chris Paton at 16:24