A Decade of Centenaries: Researching Ireland 1912-1923

Now on sale in Australia is another of my latest Unlock the Past books, entitled A Decade of Centenaries: Researching Ireland 1912-1923. A UK edition, Canadian edition and ebook version will also be available shortly. Here is the back cover blurb: 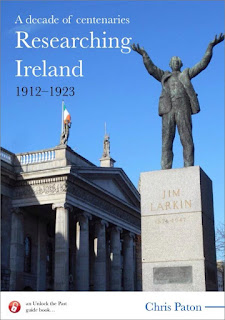 As the issue of Home Rule reared its head for a third time, its supporters and detractors raised militias to defend their positions, whilst women fought for the vote and labourers fought for better terms from their employers. The First World War would soon dramatically change everything, leading some to see England's difficulty as Ireland's opportunity. When an independent republic was proclaimed through force of arms at Easter 1916, the response would see a brutal guerilla war fought between the British forces the Irish republicans, a partitioned island, and a nation divided.

To further give a flavour of the structure of the book, the following is the contents list:

2. Home Rule
- Ireland in the Union
- The Ulster Covenant
- Ulster and Irish Volunteers
- Researching the Volunteers

6. The Easter Rising
- The Rebellion
- The participants
- Researching the Rising

7. Towards independence
- Conscription and election
- The War of Independence
- The Treaty
- The Irish Civil War
- Northern Ireland
- Legacy
- Researching 1919-1923

The book is available from Gould Genealogy at http://www.gould.com.au/A-Decade-of-Centenaries-Researching-Ireland-1912-p/utp0288.htm.

UPDATE: The ebook edition is now available from http://www.gen-ebooks.com/a-decade-of-centenaries-researching-ireland-1912.html, priced at AU$9.95 (about £4.80 in Sterling). There's a free PDF based sample of the book, the link is under he PayPal logo.

For details on my genealogy guide books, including my recently released Discover Scottish Church Records (2nd edition), Discover Irish Land Records and Down and Out in Scotland: Researching Ancestral Crisis, please visit http://britishgenes.blogspot.co.uk/p/my-books.html. My Pinterest account is at https://www.pinterest.com/chrismpaton/.
Posted by Chris Paton at 18:59