Details from the North of Ireland Family History Society (http://www.nifhs.org) of a new book released at Who Do You Think You Are Live: 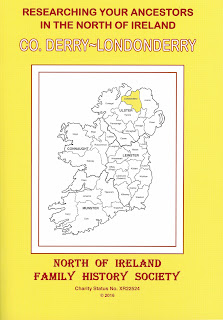 This book has been compiled to assist those researching their families in County Londonderry. We have identified the types of records that are available and where they can be found, with reference numbers where applicable.

Most of the area of the present county was known as O’Cahan’s Country from the Gaelic Irish sept of the O’Cahans, (or O’Kane), who claimed descent from one of the sons of Niall of the Nine Hostages and were a branch of, and sub-lords to, the O’Neills. This area became known as County Coleraine in 1585. In 1613 the agreement with the London Companies enlarged the county by granting additional land. This now included Derry City and the adjacent land to the west of the River Foyle, in Co. Donegal, (becoming the N.W. Liberties of Londonderry), Coleraine, with adjacent land to the east of the River Bann, in Co. Antrim, (becoming the N.E. Liberties of Coleraine), and most of the Barony of Loughinsholin to the south, which was part of Co. Tyrone and which was heavily wooded. The county and Derry city were both renamed Londonderry at this time, thus making the new county of Londonderry the fourth in size in Northern Ireland. However both names are used in this book.

County Londonderry lies in the north-north-west of the Province of Ulster. It is bounded on the north by Lough Foyle and the Atlantic Ocean, to the east by Co. Antrim, south-east by Lough Neagh, on the south-west by Co. Tyrone and on the north-west by Co. Donegal. The county has a wide variety of scenery from spectacular cliffs and award winning beaches in the north, to the Sperrin Mountains, in the south-west, with Sawel, the highest peak, and Slieve Gallion and forest parks like Banagher Glen and Ness Wood. Binevenagh Area of Outstanding Beauty was designated in 2006.

The Lower Bann is the only river to flow out of Lough Neagh; the largest lake in Ireland. Flowing north and through Coleraine into the Atlantic Ocean near Castlerock, it mostly forms the east border of the county. Smaller rivers flowing into it are the Clady, Agivey and Macosquin rivers. The Moyola flows directly into Lough Neagh and the Rivers Roe and Faughan flow into Lough Foyle, at the mouth of the River Foyle. 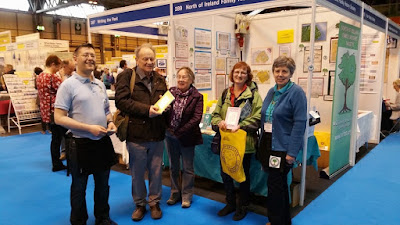 "WDYTYA day one at Birmingham NEC. The first sale of our new County Derry book
to Edmund and Jean Nelson with our volunteers Martin McDowell on left, Ann
Robinson on right with visiting member Lyn Buckley 2nd from right."
(With thanks to Maeve Rogan)

For details on my genealogy guide books, including A Decade of Irish Centenaries: Researching Ireland 1912-1923, Discover Scottish Church Records (2nd edition), Discover Irish Land Records and Down and Out in Scotland: Researching Ancestral Crisis, please visit http://britishgenes.blogspot.co.uk/p/my-books.html. My Pinterest account is at https://www.pinterest.com/chrismpaton/.
Posted by Chris Paton at 11:28