So that was the election...! 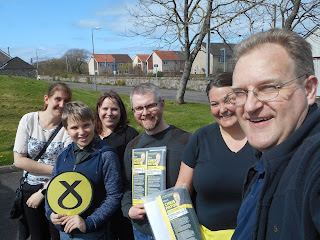 So that was the local government election! Despite coming third out of eight candidates in the initial first preference votes in a ward offering three seats, the Scottish elections used the Single Transferable Vote system, which meant taking into account subsequent second, third, fourth preferences etc. Although I fought the election in Ayrshire's Stevenston ward exclusively on local issues, Scottish politics has now essentially become polarised into unionist and nationalist camps, and so with more unionists standing in the ward, most subsequent transfers went their way, leading to my elimination in the fifth round - ironically then allowing my SNP colleague to leap well beyond the quote needed once my transfer votes went her way. C'est la vie!

It was a great experience though, I've had the time of my life, listened to some extraordinary stories, and had some great banter with my friends and political opponents. No matter what your political beliefs are, or who you vote for, I would absolutely encourage everyone to get active politically at some point in their lives - not only is it invigorating, it is actually great fun, and you might actually just make a difference.

As of Monday then, I am back at your service full time with The GENES Blog, with a few announcements coming your way soon from me on some future ventures overseas that I have already signed up to this year, next year and 2019! Stay tuned... :)

For details on my genealogy guide books, including A Beginner's Guide to British and Irish Genealogy, A Decade of Irish Centenaries: Researching Ireland 1912-1923, Discover Scottish Church Records (2nd edition), Discover Irish Land Records and Down and Out in Scotland: Researching Ancestral Crisis, please visit http://britishgenes.blogspot.co.uk/p/my-books.html.
Posted by Chris Paton at 11:33

Email ThisBlogThis!Share to TwitterShare to FacebookShare to Pinterest
Labels: elections