DNA, ethnicity, and a racist

I found the following this morning whilst browsing through Twitter, from a person ranting about immigration. The post was made on October 11th. I have hidden the identity of the tweeter (the account page is just horrendous), and also the names of two people whose DNA ethnicity images that have been appropriated to support this rant – one of whom is a friend of mine (and ironically/tragically for this idiot's thesis, not actually British). I have of course contacted my friend to alert to the misuse of this personal information, and have also alerted Ancestry via a response to this idiot's tweet. 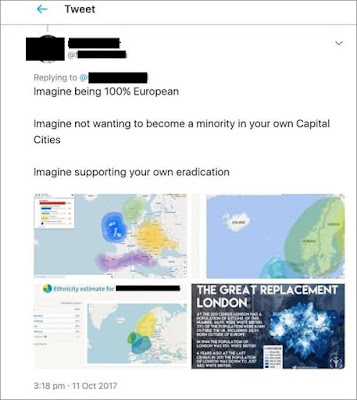 In this example, this idiot tweeter is trying to use ethnicity profiling images to show how 'non-British' Britain is allegedly becoming, what with all this European identity mixing in with it, etc. The level of ignorance of British history is truly astonishing in this regard.

Whilst in Australia recently, I had the pleasure to travel on a talks tour with German based genealogist Dirk Weissleder about a great many issues to do with genealogy, and its perception in the UK and Germany. I have commented on some of these for a forthcoming Family Tree magazine article, but one in particular was his observation that DNA testing and genealogy is apparently not at all popular in Germany, for many reasons, including the country's recent history in which the Nazis tried to corrupt the discipline to establish so called 'Aryan' ancestry for members of its party, and because of its attitudes to ethnicity, and what it did with them. It was a fascinating conversation, and one of which I have some sympathy with, because to label any people with an ethnicity tag can be potentially dangerous. To misrepresrent such information is even more so, as history has shown.

This racist tweeter is of course not advertising Ancestry, and Ancestry cannot in any way be held liable for what this idiot has used its imagery for. I remain a fervent supporter of Ancestry's DNA testing service and its cousin connection service. For those doing tests though, there are things to learn. Be careful with how and where you display your ethnicity results (I am as guilty with my own, as I am sure I have shared my own images at some point in reviews), be careful with what conclusions you draw from such results – and be careful not to allow others, as in this case, to make statements and conclusions using your results to reinforce their own warped agendas.

My next 5 week long Scotland 1750-1850: Beyond the OPRs course commences Nov 6th 2017 - details at https://www.pharostutors.com/details.php?coursenumber=302. For my genealogy guide books, visit http://britishgenes.blogspot.co.uk/p/my-books.html, whilst details of my research service are at www.ScotlandsGreatestStory.co.uk. Further content is also published daily on The GENES Blog Facebook page at www.facebook.com/BritishGENES.
Posted by Chris Paton at 11:41