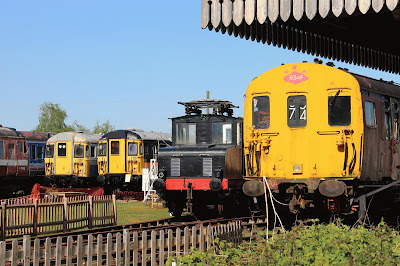 Electric Railway Museum will open to the public for the final time this weekend (Sunday 8 October) with organisers promising a fitting send off for the unique Coventry heritage attraction.

Alongside rides on the Museum’s 7 ¼ inch gauge miniature railway, shunting demonstrations and the opportunity to explore its unique collection of electric railway vehicles for the last time, the site’s final Open Day will also arrive with its own Beer & Cider Festival.

Furthermore, adult visitors won’t need to draw straws as to who is the designated driver, as the Museum will be running a free vintage bus service from Coventry city centre to the site and back throughout the day.

Situated on Rowley Road on land close to Coventry Airport and the Warwickshire village of Baginton, Electric Railway Museum occupies a site earmarked for commercial development.

Landowners Coventry City Council have not renewed the Museum’s lease and, despite concerted efforts by the trustees, volunteers and wider heritage sector behind the scenes, an alternative location for the attraction has not been found.

“Despite us failing to secure a single site to house the collection, a long term home has been sourced for almost every item we are currently displaying. Once our doors close to the public on Sunday, the work of dismantling the site begins.

“Myself and the trustees have been humbled from the support of our volunteers, the general public and railways enthusiasts alike, as well as organisations such as the National Railway Museum and the Heritage Railway Association. In fact, the latter’s President, Lord Faulkner of Worcester will be attending our final Open Day to further discuss the issue of electric railway heritage and how this will be preserved following the closure and dispersal of the only such collection in the UK.”

Celebrating its 10th anniversary this year, Electric Railway Museum aims to promote the heritage of all electric trains in the UK through traction and rolling stock restoration, display and operation, along with work in gathering historically relevant technical and photographic archives.

Electric Railway Museum houses the largest private collection of electric trains in the UK and is the only railway museum in Great Britain dedicated to electric traction. A registered charity, the work of the Museum has been entirely run by volunteers and funded through donations from the public.

Despite only open to the public on selected days throughout the year, the Museum attracted more than 2,000 visitors to the region in 2016, and has already exceeded that figure in 2017.

However, the Coventry and Warwickshire Local Enterprise Partnership (LEP) and joint venture partners Roxhill are hoping to move forward with revised plans for the Coventry and Warwickshire Gateway scheme. Electric Railway Museum is currently situated within the proposed site for this new development and in July this year, the attraction announced it would be forced to close if an alternative site was not found by Sunday 8 October.

“It is with a heavy heart that Electric Railway Museum will have to close this weekend. Rest assured that we will continue to work hard behind the scenes to ensure that locomotives and rolling stock currently on our Coventry site are not endangered.

“However, we want to thank the public for all their support over the past 10 years and will be departing Coventry with our biggest Open Day ever, including a Beer & Cider Festival, free vintage buses between the Museum and city centre, and extended opening hours from 10.30am until 6.30pm.”

Elsewhere, members of the public will be able to climb aboard the Class 457 and one of the Class 309s, complete with the museum display (Museum 309), a café – serving hot and cold beverages, snacks and light bites – and the Electric Railway Museum shop.

Shunting demonstrations will be carried out throughout the day by Spondon Electric Locomotive No. 1 and 165DE Locomotive ‘Mazda’.

Visitors will be able to see the Victoria Line Signalling Centre, which showcases how trains were controlled on the London Underground line when it first opened in the late 1960s.

The display, which opened to the public last September, is housed inside the passenger accommodation area of the Museum’s Class 308 EMU vehicle and features the Victoria Line push-button control desk and line diagrams from the original control room at Cobourg Street.

Furthermore, Electric Railway Museum has two carriage bodies built for the City and South London Railway (C&SLR), the first deep-level underground ‘tube’ railway in the world and today part of London Underground’s Northern Line. The oldest carriage is a timber body on a steel underframe and dates from 1903, the other is from 1907 and, unlike earlier builds, was created all in steel, making it the oldest surviving steel frame carriage in the UK.

Volunteers will be on-hand to explain more about Electric Railway Museum’s diverse collection, which also includes British Railways Classes 307 and 308, as well as the power car for the record-breaking Advanced Passenger Train Prototype (APT-P), on loan from the National Railway Museum.

Electric Railway Museum was formed in 2007 to bring about the urgent need for a permanent home where the rich and lengthy history of electrically powered trains could be presented to the public on one site.

The collection of electric trains at the Museum’s Baginton site represents over a century of technological progress and includes examples of commuter trains, battery-electric locomotives, underground carriages, high speed express units and some of the specialist line side equipment that made them work, such as signalling and current collection apparatus.

(With thanks to Ben Goodwin)

My next 5 week long Scotland 1750-1850: Beyond the OPRs course commences Nov 6th 2017 - details at https://www.pharostutors.com/details.php?coursenumber=302. For my genealogy guide books, visit http://britishgenes.blogspot.co.uk/p/my-books.html, whilst details of my research service are at www.ScotlandsGreatestStory.co.uk. Further content is also published daily on The GENES Blog Facebook page at www.facebook.com/BritishGENES.
Posted by Chris Paton at 14:04