TheGenealogist has just released over 2.7 million BT27 records for the 1930s. These Outbound Passenger Lists are part of an expanding immigration and emigration record set on TheGenealogist that feature the historical records of passengers who sailed out of United Kingdom ports in the years between 1930 and 1939. With the release of this decade of records, the already strong Immigration, Emigration, Naturalisation and passenger list resources on TheGenealogist have been expanded again. 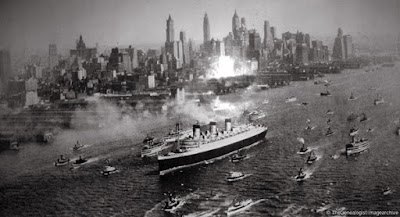 The fully searchable BT27 records from The National Archives released today will allow researchers to:

These fully indexed records allow family historians to search by name, year, country of departure, country of arrival, port of embarkation and port of destination.

Those with ancestors who sailed from Britain in the 1930’s will welcome this fascinating new release from TheGenealogist, which adds to their current Emigration records, now totalling over 19 million and dating back to 1896.

Needing a Christmas present for a family history obsessed love one (or for yourself)?! For my genealogy guide books, visit http://britishgenes.blogspot.co.uk/p/my-books.html, whilst details of my research service are at www.ScotlandsGreatestStory.co.uk. Further content is also published daily on The GENES Blog Facebook page at www.facebook.com/BritishGENES.
Posted by Chris Paton at 16:57