Friends in Times of Turmoil - Exhibition Launch at PRONI

From the Public Record Office of Northern Ireland (www.nidirect.gov.uk/proni): 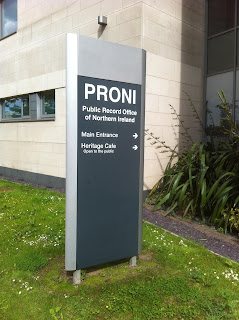 Tomasz Tadla, Consul General of the Republic of Poland and For Your Freedom & Ours request your company at the launch of the '‘Friends In Times of Turmoil” exhibition which take place on the 3rd of May at 7pm at the Public Record Office of Northern Ireland.

The exhibition will be launched with a presentation by Professor Jan Jędrzejewski entitled, 'Not Quite Poles Apart: Hiberno-Polish Literary and Cultural Relations from the Perspective of Northern Ireland’.

Friends in Times of Turmoil Exhibition

This unique exhibition created by the Polish Embassy in Dublin in 2017 tells the story of Consul Wacław Dobrzyński who played a central role in establishing diplomatic relations and friendship between the young states of Ireland and Poland in the twentieth century.

From the moment he set foot on the Emerald Isle, Dobrzyński became deeply infatuated with Ireland and her people. In total, he spent 34 years in Ireland, of which 25 years were in diplomatic service, making him the longest-serving foreign diplomat in the history of the Irish State.

The 'Friends In Times of Turmoil” Exhibition will be available to view at PRONI until 25 May 2018.

Jan Jędrzejewski was educated at the University of Łódź, Poland, where he obtained, in 1985, his MA in English philology, and at Worcester College, University of Oxford, where he completed, in 1992, his DPhil on Thomas Hardy.

A specialist in nineteenth-century English literature, particularly the Victorian novel, Professor Jędrzejewski also has a major interest in comparative literature, focusing on the literary relations between the British Isles and Poland. He has published monographs on Thomas Hardy and the Church (1996) and George Eliot (2007), and he has produced critical editions of Hardy and Joseph Sheridan Le Fanu, as well as numerous journal articles and book chapters.

Registration will take place from 6.30 to 7.00pm and the presentation will start at 7pm.
Additional Information


Admission is to the launch event on the 3rd May is FREE, however booking is essential. Register for this event at Eventbrite (https://www.eventbrite.co.uk/e/friends-in-times-of-turmoil-exhibition-launch-tickets-45190592278?aff=es2)
The Heritage Café at PRONI will be open from 9.30am to 3.00pm

For my genealogy guide books, visit http://britishgenes.blogspot.co.uk/p/my-books.html, whilst details of my research service are at www.ScotlandsGreatestStory.co.uk. Further content is also published daily on The GENES Blog Facebook page at www.facebook.com/BritishGENES.
Posted by Chris Paton at 18:58