Who Do You Think You Are? returns June 6th on BBC1

The 15th series of Who Do You Think You Are? returns to BBC1 in England and Northern Ireland at 9pm on June 6th 2018. The first episode will feature actress Michelle Keegan. Here's the synopsis:

Michelle Keegan
Who Do You Think You Are?, Series 15 Episode 1 of 8

Our Girl actress Michelle Keegan uncovers some exceptional women on her family tree. On her mother's side Michelle discovers that her Gibraltarian great-grandmother Leonor had to up sticks when all women and children and the elderly were evacuated from harm's way in Gibraltar to the apparent safety of London during the Second World War, a month before the start of the Blitz. 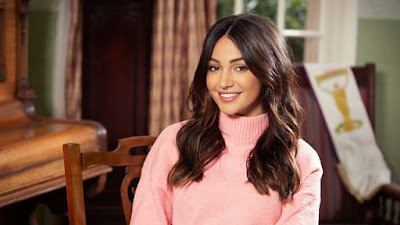 NB: There's a note on the page stating 'except Scotland, Scotland HD, Wales, Wales HD'. I've managed to find their relevant tx times in these countries, as follows:

For my genealogy guide books, visit http://britishgenes.blogspot.co.uk/p/my-books.html, whilst details of my research service are at www.ScotlandsGreatestStory.co.uk. Further content is also published daily on The GENES Blog Facebook page at www.facebook.com/BritishGENES.
Posted by Chris Paton at 20:36