That's it for The GENES Blog - thank you and goodbye!

That's it folks - after eight years, The GENES Blog (previously British GENES), has now ceased to be! You will now find all the latest news from Scotland and Ireland, as well as the rest of the UK and its diaspora, on the newly reinvigorated Scottish GENES blog at https://scottishgenes.blogspot.com.

In a post-Brexit world, Scotland and Ireland have some very exciting prospects ahead of them, which has led to me returning to my roots with Scottish GENES, as I wish to portray a more forward looking brand from the greatest country on Earth - Alba gu bràth!!!

If you have followed The GENES Blog over the last eight years, I would like to sincerely thank you for all your support, and I hope that you found the news coverage useful. I also hope that you will now consider following Scottish GENES, which originally kicked off the whole shebang many moons before The GENES Blog was even in nappies. All the latest news and views, from the Scottish based perspective of a long resident Ulsterman, with roots in both lands.

You can subscribe to Scottish GENES for a daily email feed in the right hand column on the page, at the top, as shown, or through an RSS feed. 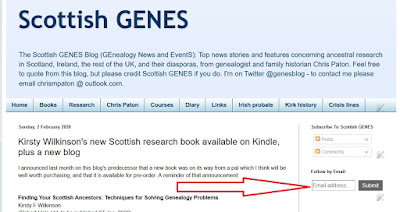 Thanks you once again, agus mar sin leibh an-dràsta - bye for now!