We have two winners in the latest British GENES competition!

Up for grabs were two copies of my latest book, Discover Scottish Land Records, and the question was to name the Scottish villages that make up the Barony of the Four Towns of Lochmaben - the answer was Greenhill, Heck, Hightae and Smallholm.

My trusty sidekick, number one son Calum, was home a few moments ago for his lunch break, and drew the winners from an impromptu drum which is in no way at all my other son's Blues Brothers hat! :) 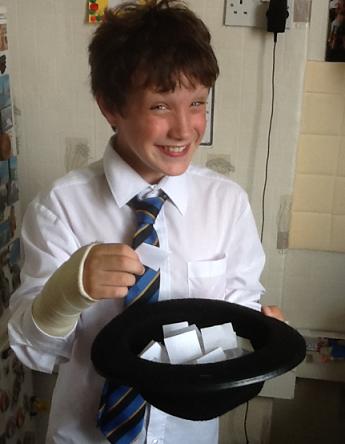 Congratulations to both of you, and I'll get the books to you in the post in the next couple of days!

You'll note Calum has two arms in bandages, by the way - he decided last week to celebrate gravity by falling out of a tree and fracturing both wrists! (He's fine now, after a crazy week last week with several hospital appointments etc)

Check out my Scotland's Greatest Story research service www.ScotlandsGreatestStory.co.uk
New book: It's Perthshire 1866 - there's been a murder... www.thehistorypress.co.uk/products/The-Mount-Stewart-Murder.aspx (from June 12th 2012)
Posted by Chris Paton at 13:32