I'm delighted to say that my latest Scottish genealogy themed book is now out from Unlock the Past in Australia. At present it is available in print form from the company via www.gould.com.au/Discover-Scottish-Civil-Registration-Records-p/utp0284.htm at AU$17 (inc GST) plus p&p. An e-edition, if you prefer to read it via your PC, Mac or tablet in PDF format, will be available in the next couple of days (http://www.gen-ebooks.com).

Here's a description of the contents, and what it's all about really! 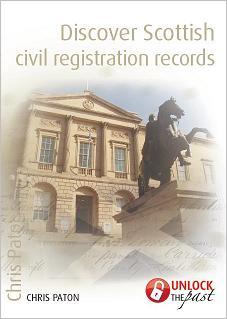 This guide from family historian Chris Paton takes a look at the vast world of Scottish civil registration records. Scotland commenced the statutory registration of births, marriages and deaths within the country in 1855, second seventeen and half years after a similar process had already got underway in England and Wales. The information lost to the family historian by such a late start is, however, more than made up for by the fact that Scottish registration records are the most detailed of all those found within the British Isles.

But what was the law behind Scottish registration, and how did it differ to England, Wales and Ireland? Who was legally obliged to do what and when, what were the penalties for default, and how might such knowledge help with our ancestral research? Why were all the forms of Scottish irregular marriage not abolished in 1939, and what angered the country's doctors? Where are the records not found online via ScotlandsPeople, such as those for adoption, vaccination, civil partnerships and divorce - and what vital records does the General Register Office in England hold for Scots as far back at the 1760s, and far beyond Britain's shores?

The book is structured as follows:

It's the latest in a series of more indepth guides that I have been producing in which I have been trying to find out what really makes the records used within Scottish genealogy tick, going well beyond ScotlandsPeople into aspects of law behind civil registration, record availability, and British generated documents found beyond Scotland's borders. Other titles produced so far include Discover Scottish Church Records, and Discover Scottish Land Records - and I'm already hard at work on the next one...!

Incidentally, if you are at the National Family History Fair this coming Saturday, in Newcastle, I believe some copies may be available there.

I hope you find it of some use - enjoy!

My new book, Tracing Your Irish Family History on the Internet, is now available from Pen and Sword. My Scottish land and church records ebooks are available at http://www.gen-ebooks.com/unlock-the-past.html, whilst my next Pharos Scottish course, Scottish Research Online, starts Sep 4th - see http://pharostutors.com/details.php?coursenumber=102. Time to smash a few brick walls...!
Posted by Chris Paton at 12:27