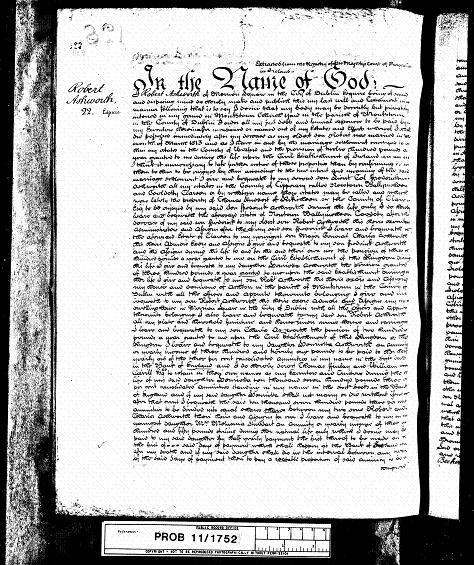 Ancestry has uploaded some 1012964 wills as probated through the Prerogative Court of Canterbury from 1384-1858. The PCC was the highest of the Anglican probate courts of the land (and the superior of the two prerogative courts, covering the south of England and Wales - there was a separate court for the north of England, based at York). Despite being a southern based English based court, however, it was possible for folk to choose to go through the PCC rather than the PCY, and you will also find wills for folk across the British Isles - particularly if they had English interests and had wills confirmed elsewhere and then resealed in England, or vice versa (a search for Edinburgh as a location, for example, has 218 hits, with 245 returned for Dublin).

Digitised images of the PCC were first made available by the National Archives at Kew many years ago (see www.nationalarchives.gov.uk/records/wills.htm), though the images are at times quite poor, with the high contrast occasionally obliterating parts of the letter forms. A second filming in recent years has seen a much improved version appear on The Genealogist (www.thegenealogist.co.uk), though on occasion with this I have also found the odd image to be slightly out of focus. I may be wrong, but it seems that these are the same images from the first filming. Nevertheless, the database provides yet another way to search one of the most important genealogical collections from England.

Incidentally, the Prerogative Court of York records are still slowly being indexed - there is a Prerogative & Exchequer Courts of York Probate Index 1688-1858 on Origins at www.origins.net/nwiwelcome.aspx, with over 263,800 names - copies of the original images have not been placed online, but can be ordered through the site.

My latest book, Discover Scottish Civil Registration Records, is now available from http://www.gould.com.au (print) and http://www.gen-ebooks.com/unlock-the-past.html (ebook), whilst Tracing Your Irish Family History on the Internet is available at http://www.pen-and-sword.co.uk/Tracing-Your-Irish-History-on-the-Internet/p/3889/.
Posted by Chris Paton at 12:56