The Military Archives website has now made available the Military Service Pensions Collection at www.militaryarchives.ie/collections/online-collections/military-service-pensions-collection, which when complete will contain 300,000 files relating to 60,000 individuals who fought during the Easter Rising and the War of Independence from 1916-1923. This first release, comprised of 9600 files, primarily, though not exclusively, concerns the Easter Rising of 1916 itself, as well as others involved in the independence movement and Civil War. In addition are files for those who served with the Connaught Rangers in the mutiny in Solon and Jalandhar, India on 28 June 1920, and a small number of payments to folk who stored weapons for organisations involved in the struggle, though who were not members of those groups themselves.

Included are the following: 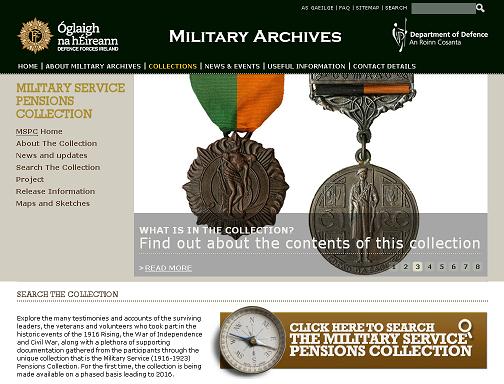 The collection page notes the following:

Explore the many testimonies and accounts of the surviving leaders, the veterans and volunteers who took part in the historic events of the 1916 Rising, the War of Independence and Civil War, along with a plethora of supporting documentation gathered from the participants through the unique collection that is the Military Service (1916-1923) Pensions Collection. For the first time, the collection is being made available on a phased basis leading to 2016.

The files were created in response to the following legislation from the Irish governments in the south of Ireland:
To search the collections, visit www.militaryarchives.ie/collections/online-collections/military-service-pensions-collection/search-the-collection.

The BBC has a feature on the collection at http://www.bbc.co.uk/news/uk-northern-ireland-25752035

UPDATE: Oh - my - God! I've just made one of the biggest discoveries since I started my family history research 14 years ago. I can't elaborate just yet, as I am not sure if is a well kept secret in the family that I have just found out about, or if it is genuinely not known about. But this new collection has turned out to provide information of game changing proportions - I suspect I now know why certain people in the family emigrated! A huge thank you to Military Archives for an astonishing resource.