How to find 19th century Irish poor removals from Britain

In Britain the holding of the legal right of ‘settlement’ in a parish determined whether a person could claim poor relief from the relevant parochial authority when the chips were down, perhaps through unemployment or the ravages of old age. If a person did not hold an automatic right to settle, he or she could still move to a new parish with a ‘settlement certificate’ from his or her previous parish, which basically noted that the home parish would act as guarantor and accept liability if the applicant ever required poor relief from his or her new intended home. Without the right of settlement, a person could be forcibly removed from the parish in order to save it from a financial burden for which it did not wish to be responsible.

When the new poor law amendments acts were introduced in England and Wales in 1834, and in Scotland in 1845, the system of settlement was simplified, and new concepts such as ‘irremovability’ introduced, guaranteeing people the right to stay within a parish if they had already been there for a specific period of years. Under the new system, the process of removals continued. Although it died down considerably towards the end of the 19th century, such removals in fact continued until the abolition of the unions in 1930.

Amongst those who were affected by removal were thousands of Irish applicants in Britain. If upon examination it was found that they had no right of settlement they could be deported from the nearest port back to their home parishes of origin in Ireland, with the cost for such a removal charged to those parishes, even if they had been in Britain for decades. The result is that a wealth of documentation has survived concerning the fate of thousands of Irish folk forcibly ejected from the country and sent back over the water.

The primary place to start when searching for names of those removed is the local British county record office covering the area of interest. If you think that an ancestor spent some time in a workhouse (England/Wales) or poorhouse (Scotland), or claimed poor relief, a useful site to get you started in trying to find their initial application for such assistance is the Workhouses website at www.workhouses.org. Each institution has a dedicated page providing information on its history and any records known to exist, as well as noting the record office holding them (usually with a link to its site). Alternatively you can also search the catalogued holdings of most British records offices through the English based National Archives catalogue Discovery at http://discovery.nationalarchives.gov.uk/advanced-search or via the Scottish Archive Network at www.scan.org.uk/catalogue.

The Moving Here website is sadly no longer available, but when running it cited a good example of the types of records you might find in such offices - thankfully the page has been cached by the Internet Archive at https://web.archive.org/web/20120516032448/http://movinghere.org.uk/galleries/histories/irish/settling/removal_1.htm. Amongst the many record types illustrated is a digitised copy of one of sixty five volumes from 1801-1835 recording the names of poor people who were deported from Liverpool to Ireland (in this case from the year 1834), as sourced from Lancashire Record Office. The site also gives examples of other useful records, including the original examination papers relating to an individual’s case, as well as material relating to the removal as held in the relevant Quarter Session’s papers for the area in question.

Another extremely useful website listing such removals is the House of Commons Parliamentary Papers site at http://parlipapers.chadwyck.co.uk/marketing/index.jsp. Unfortunately this is only available through subscribing libraries and academic institutions, and not to general public access. Here in Scotland, access is freely available to the public via the National Library of Scotland's Licensed Digital Collections (https://auth.nls.uk/ldc/).

The database itself contains all of the sessional papers created by the House of Commons from 1800-2008, with additional material going back as early as 1688. Amongst these papers are letters concerning individual cases and detailed annual reports from the second half of the 19th century recounting vast lists of Irish people on a parish by parish basis who were returned to Ireland. In addition to providing their names, the British parish of residence and the parish in Ireland to which they were removed, they also contain additional information such as their ages, the number of members within their family who were deported alongside them, the length of time spent in Britain and the causes for their removal. 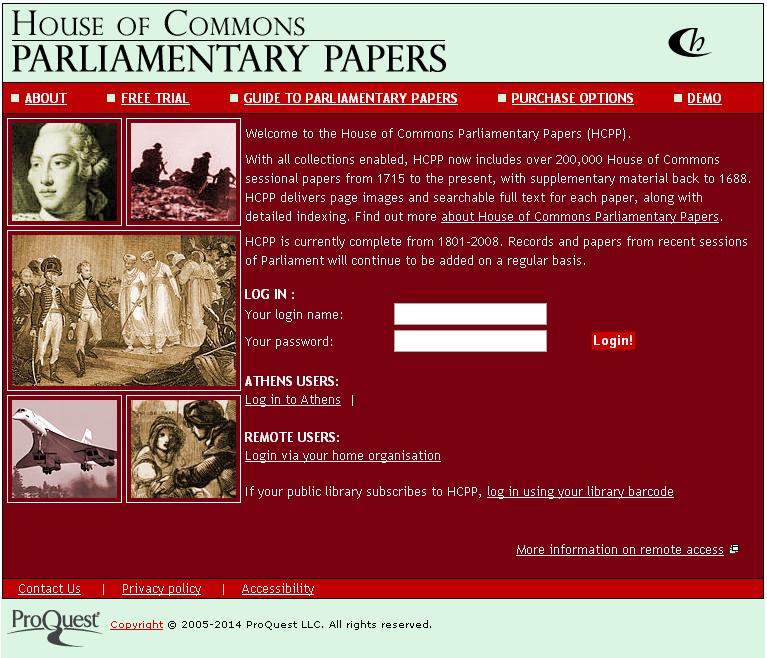 To find the records on the website, the simplest way is to search using the catalogue, though you may need to use various search terms to locate the records, such as ‘poor removal’ and a date range. The earlier 19th century records tend to concern ether various bills and legislation on the poor laws themselves. The records listing removals in this period tend to be more statistical in nature, with most not naming those who were removed, and instead providing numbers of ejected from each parish with any associated costs. It is not until the middle of the century when more genealogically useful material begins to appear on the site. A good example is a 16 page document from 1849 listing correspondence between the Poor Law Commissioners of Ireland and England concerning the removal of a man called John McCoy from Newcastle-upon-Tyne to Armagh in the previous year. Originally from Keady, McCoy had lived in Northumberland for 46 years, the last fifteen of which had been in All Saints parish in Newcastle, which should have rendered him ‘irremovable’. Despite this, he was deported after having claimed just three days poor relief at the workhouse, causing something of a row across the Irish Sea.

The first detailed list of paupers on the site is that published in 1863 detailing all the destitute poor removed from England and Scotland and sent back to Ireland from December 1st 1860 – December 1st 1862. Several similar reports then follow, with the latest equivalent list dating from 1878. The records are surprisingly detailed and list many individuals and their causes for removal, but are unfortunately not keyword searchable. This means that you will have to browse your way through them to the parish of interest. In most cases the counties and parishes are presented in alphabetical order, although the names of the individuals are not so arranged within each parish list.

The records can be immensely detailed. In 1875, for example, a listing for a Margaret Gillespie is noted by the authorities in Sunderland, describing her removal to Belfast. Although her age is not recorded, the record states that she had two children, four year old Mary Ellen and six months old Charles, and that she had resided in England for seventeen years, though with a ‘considerable time spent in Scotland’. The reason for her removal is given as her ‘inability to earn a livelihood’. In returns for Lancaster in the 1878 report, the information is laid out more formally, almost as if it was a census return. Patrick Mulhall aged 45, his wife Bessy aged 40, children Mary (19), Ellen, (17), Michael (15), Joseph (7) and Elizabeth (5) are each recorded separately one after the other, with all noted as having been in the city for seven months, and having returned to Belfast for a ‘want of work’.

Not everybody was forcibly removed though, and cases are also included of voluntary resettlement. In 1878, for example, 15 year old Luke Kerr is noted as having been in Peterhead, Aberdeenshire for some 19 weeks, but was removed voluntarily after recovering from the affects of an accident. Relatives in Ireland had advanced money to the poor law authorities in the city to pay for his removal, and he was then sent back to Skerries in County Dublin.

If you cannot gain access, some records are freely available on Raymond’s County Down website at www.raymondscountydownwebsite.com/html/index2.htm, covering the years from 1867-1869, and 1875-1878. Well worth a look!

For more on Irish research, check out my Tracing Your Irish Family History on the Internet book from Pen and Sword, available in paperback or in an e-edition - see my Books section above, where you can also find a range of other useful Scottish and British genealogy based titles.

Stuck for a Christmas gift?! I have a series of genealogy books available in the UK, Australia and Canada, on Scottish, Irish and British based subject areas. Further details at http://britishgenes.blogspot.co.uk/p/my-books.html. Santa approves!
Posted by Chris Paton at 13:25