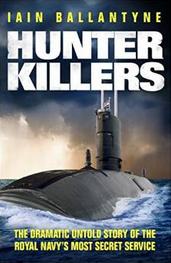 A quick plug for a book that you may be interested in by author Iain Ballantyne. Hunter Killers looks at "the dramatic story of the Royal Navy's most secret service" as it fought during the Cold War. I have a connection to the book, in that my father's story on board one of the navy's vessels, HMS Warspite, during a particularly dangerous incident in 1968, forms a significant part of two of the chapters found within ("Jousting with 'Crazy Ivan" and "The Allotted Escape Route"). It's an incident I have been researching for a few years now, and which Iain has been able to progress further with additional contributions from others who were on board.

Although first published in hardback in 2013, the paperback edition has just been released a couple of months back. It can be purchased online via Amazon at £7.99, or a Kindle edition for £3.59. See www.amazon.co.uk/Hunter-Killers-Dramatic-Untold-Service/dp/1409139018

A huge thanks to Iain for including the story, and in particular for the acknowledgements for my father's contribution.

Stuck for a Christmas gift?! I have a series of genealogy books available in the UK, Australia and Canada, on Scottish, Irish and British based subject areas. Further details at http://britishgenes.blogspot.co.uk/p/my-books.html. Santa approves!
Posted by Chris Paton at 13:07