I've just been notified of a great resource on the University College Dublin website - a massive range of Ordnance Survey Ireland supplied maps for cities, towns and villages in what is now the Republic of Ireland, as recorded in the 19th century between 1837 and 1896. Here's part of the description:

The collection contains maps for almost 150 cities, towns and villages in the Republic of Ireland. Most are Town Plans which were surveyed at either five or ten foot to one mile scale between 1837 and 1896. The remainder were produced by enlargement of the 1/2500 maps between 1892 and 1911. The large scale at which they were surveyed means that details, such as the ground floor interior plans of public buildings from churches and banks to hospitals and railway terminals, can be viewed on the maps. At street level, features include benchmarks, pillar boxes, public water pumps, troughs, hydrants, and lamp posts. Other useful information includes the parish, barony, townland, ward and municipal boundaries which are all clearly marked. Building types, such as mills, foundries, dye works, barracks, billiard rooms, galleries, tea houses, bull rings and Turkish baths, give an indication of the industrial and social activities of the population of the time. Please note that modern place names are used in the subject headings in the records. For example, to search or filter by subject for Queenstown maps, use the modern place name Cobh.

I've just been having a look at one of the maps for Carrick-on-Suir and was surprised to note that a modern pay and display car park that I've regularly used in the past was once the site of the town's military barracks! 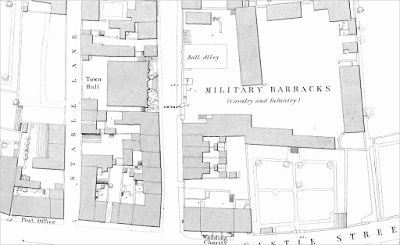 For details on my genealogy guide books, including A Decade of Irish Centenaries: Researching Ireland 1912-1923, Discover Scottish Church Records (2nd edition), Discover Irish Land Records and Down and Out in Scotland: Researching Ancestral Crisis, please visit http://britishgenes.blogspot.co.uk/p/my-books.html. My Pinterest account is at https://www.pinterest.com/chrismpaton/.
Posted by Chris Paton at 13:27