Yesterday I attended the latest stakeholder forum at the Public Record Office of Northern Ireland (www.proni.gov.uk) in Belfast. The following is a summary of the latest state of play at the archive.

First up, as previously reported, the archive is moving from being a part of the Department for Culture, Arts and Leisure, to the new Department of Communities. Tied in with this will be several changes, not least of which for the main PRONI website itself, which is being moved to a new platform on Northern Ireland Direct - the new website address is likely to be www.nidirect.gov.uk/proni, though is not up and running as yet (the current address www.proni.gov.uk will redirect to this in the short term, once it is made live). Following on from that, PRONI's main email address will change in a couple of months time also. A further result of recent changes is that the new fees order, including the charges for self-service photography, looks likely to slip to the autumn.

We had a sneak preview of the new PRONI platform from Janet Hancock, who gave us a quick tour through its various pages. Functionally it will retain all of the current platform's key resources, though the team are taking the opportunity to remove some of its 'dead wood', documents hidden within its current labyrinth of options that are out of date. One possible project happening soon may be an update to the site's most useful research guide, detailing PRONI's holdings concerning church records, to reflect some recent additions (an updated PDF will be made available online if this happens). Aesthetically, my main observation is that the site is visually bolder and has been redesigned to be as tablet friendly as it was previously home computer friendly.

Janet also gave us an update on the new GIS based maps platform that I have recently blogged about (see http://britishgenes.blogspot.co.uk/2015/09/new-proni-maps-database-sneak-peak.html). This is coming along nicely, with some great features. As with some other recently hoped for developments, this has slipped a bit in terms of its release, but will certainly be worth the wait. Janet demonstrated the difference between the basic search and advanced search functions, the points of interest that can be looked for through pins on the maps (under topics such as legal, church, education, health, etc). As well as permitting mixes between a current map and a historic OS map, the site will also have aerial imagery sourced from OSNI that is geo-referenced to the equivalent maps - something I could certainly have used in December when I spent ages online trying to establish exactly where the abandoned Ballypriormore graveyard was to be found in Islandmagee! 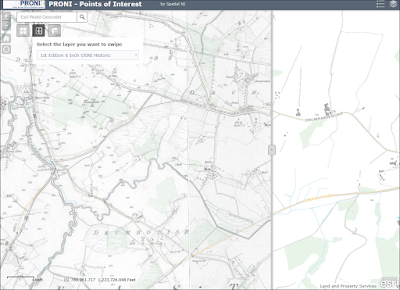 On cataloguing, we were informed that a plan to release a major update to the system at PRONI in December hit a problem, which required the archive to roll back to the previous version again. It is now hoped that the new version, which will include some digital documents as returns in a small number of searches, will happen towards the end of March. Amongst these records hoping to be included are the ED/1 Co. Down National Schools application records. The same records for Co. Antrim are now complete also, but these have still to be processed, but should hopefully follow soon after, if not at the same time as the Down collection. I asked if users would be able to save these documents to their computers, and was informed yes.

Also on this front, the Eva Chichester papers have been catalogued under D4563. This covers material from 1870s Newcastle (Co.Down) onwards for Chichester, who was a Sunday School teacher, amateur photographer and travel writer, and includes correspondence. Chichester was also in Dublin during the Easter Rising of 1916, and recorded events in the city such as being trapped in one of its private parks as soldiers blocked the entrances, a lot of the correspondence captures the confusion for the public in the event.

Papers of the Rev. George Good, president of Methodist Church in Ireland, have been catalogued under D4382. These are from the late 20th century, and include some material on the early Troubles, although they mostly deal with missionary work in Sri Lanka.

We were also informed that cataloguing of the archive's holdings on Constance Markiewicz are being improved, and should be ready end of this month. Some of the materials are to be digitised (for on site access). Elsewhere, work continues on the Londonderry Papers, the team now looking at the records concerning Lady Edith, including some of her correspondence. A travelling exhibition on the collection is in Dungiven in April, whilst a talk on the set is being given in Lisburn Library on March 16th. PRONI is holding a Depositors Day event on Wednesday April 13th, to thank folk who've deposited material with it in the last 12 months, at which they will show how the records have been catalogued and looked after.

The statutory 1988 records release took place at the end of December, and the Conflict Archive on the INternet (CAIN) was updated in January to include material from 1986, the era of the Anglo-Irish Agreement.

Amongst new accessions to be coming soon to PRONI is the Prisons Memory Archive, though this will only be made accessible on site, and only for material that is officially open to public consultation. There is a plan to make the same collection accessible across Northern Ireland through library and university based subscriptions also, but not to place it online. This should be accessible at PRONI towards early August. One of the new challenges posed by this collection for PRONI is that it includes audio-visual materials, for which the archive has had to come up with some new cataloguing standards to incorporate it into their system.

Other new accessions include additional material from the Irish Football Association from 1910-2010, catalogued under D4196. There is also an attempt at the moment, in collaboration with the Northern Ireland Women's Football Association, to encourage members of the public to donate privately held material to the organisation, which it is hoped might be transferred to PRONI for safe keeping. 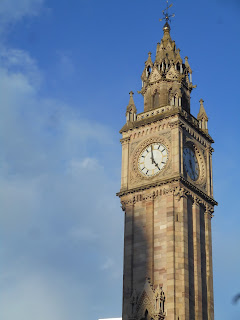 A conference for family history newbies is to be held at PRONI on Saturday June 4th. Entitled Connecting People and Place: Exploring Your Ulster Events, it is being produced in association with the Federation for Ulster Local Studies). There will be a fee (amount tbc), and a small number of exhibitors will be present. It should be noted that PRONI will not be open to the public on this day, only for delegates.

A 'collection day' in May, partnered with the Digital Repository of Ireland, will ask the public to bring in historic materials to have them digitised for posterity. Following a Jutland themed event on May 26th, further events will include a Temperance conference on June 23rd, a talk on August 17th on East Belfast folk in the First World War, and a follow on event involving Northern Ireland Screen a day later. A big Somme themed commemorative conference will also be held at PRONI on October 9th.

A 20 panel exhibition on the BBC's first Northern Ireland based transmitter, at Lisnagarvy, launches next Thursday 10th at the archive, whilst there will be an Ulster Architectural Heritage society exhibition in June, and another on lighthouses in August.


Pastie baps
Following the meeting, I did some client research, and then, with a couple of hours to go until I got the ferry back to Scotland, I went for a dander around Belfast City Centre. Belfast, oh Belfast, where have all your pastie baps gone...?! I spent three quarters of an hour trying to find one, the only chippy I could find selling one was closed, and I ended up eating a zinger burger at KFC. I was inconsolate - I may have to campaign to get them returned to their rightful place at the heart of Norn Iron! 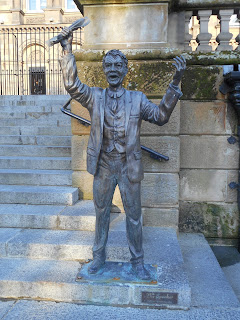 For details on my genealogy guide books, including A Decade of Irish Centenaries: Researching Ireland 1912-1923, Discover Scottish Church Records (2nd edition), Discover Irish Land Records and Down and Out in Scotland: Researching Ancestral Crisis, please visit http://britishgenes.blogspot.co.uk/p/my-books.html. My Pinterest account is at https://www.pinterest.com/chrismpaton/.
Posted by Chris Paton at 11:49