The process so far... Having decided I wanted to claim an Irish passport, I sought guidance from the Irish Government's Citizens Information website to see if I qualified, along with my children (see http://britishgenes.blogspot.co.uk/2016/06/claiming-irish-passport-1.html). Having done so, and found that we do indeed qualify, I then requested the relevant passport application forms from the Irish consulate in Edinburgh and sought a copy of my Northern Irish birth certificate (see http://britishgenes.blogspot.co.uk/2016/06/claiming-irish-passport-part-2.html). 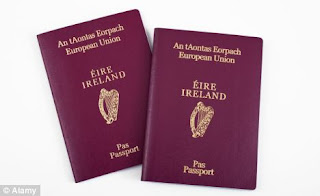 The application forms duly arrived the following day, with my birth certificate arriving a day later. For anyone wishing to apply from now, that process may perhaps take a wee bit longer, as in the light of the Brexit vote there have been well over a million requests for such passports, an extraordinary demand. Because of the Brexit vote, however, I've decided to accelerate the application for my two boys now also, so this meant ordering up a couple of extra copies of my birth certificate. I was unclear if I could send all three applications together in one go with just the one cert, so figured it was best to play it safe - and the boys will both then have copies of my birth cert in future also (I'm still a genealogist; always thinking about legacy issues! lol)

With myself and my two boys applying for passports, we visited the local photographer in Largs to get passport photos (four have to be sent through for each applicant). The guidance from the consulate states that the preference is for black and white images, although colour images are acceptable. We've ended up getting colour images as the simplest option in town.

Along with the application forms, the consulate also sent out a guidance form on how to fill them out, along with a covering letter. I filled out the three forms and then asked a friend of mine, who is a local solicitor, to act as a witness on them. The following are suitable candidates identified by the Irish government as witnesses:

One of the requirements on the form requires the witness to formally stamp the back of two of the passport photographs, as well as the form itself. This threw us slightly, as my friend has no formal stamp, but we soon twigged a workaround, in the very cover letter that accompanied the application forms. This states the following:

"The witness should stamp and sign the back of two of the photographs and insert the form number displayed in Section 9. Please ensure the witness is easily contactable at their place of work, that they clearly print their address and contact number (mobiles not accepted). Your application will be returned if we are unable to contact the witness or the witness does not fully and accurately complete their section(s) of the form. The witness does not need to know the applicant for any length of time provided they are satisfied as to their identity. If the witness does not have an Official Stamp then please ensure they sign and date the back of the photographs and include the 8-digit Form Number and sign and date Section 9 of the application form. Where possible, a Business Card should be enclosed if there is no stamp available."

So, with business cards duly provided for the applications, instead of a stamp, that one is resolved! As well as the signed forms, the witness also certified a copy of my driving license, as proof of identity - the alternative was to send through my current British passport, but I don't want to send off such an important document in the post. Additional requirements on the ID front include documents to verify my name and address (eg household bills, tax returns, etc), easily sourced.

The next stage now is to post off the application. The cover letter from the consulate in Edinburgh noted that there was currently a seven week turnaround on applications. I suspect that may drift a bit, but I'll know soon enough!

NB: PART 4 is available at http://britishgenes.blogspot.co.uk/2016/09/claiming-irish-passport-part-4-claimed.html

For details on my genealogy guide books, including A Decade of Irish Centenaries: Researching Ireland 1912-1923, Discover Scottish Church Records (2nd edition), Discover Irish Land Records and Down and Out in Scotland: Researching Ancestral Crisis, please visit http://britishgenes.blogspot.co.uk/p/my-books.html.
Posted by Chris Paton at 19:26