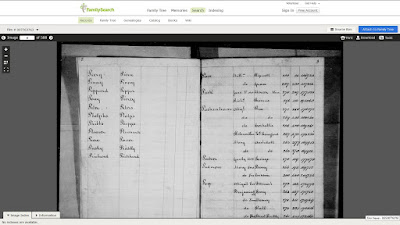 There are many gaps to the available indexes, with the site recommending that copies of some microfilms, mainly after 1830, will need to be ordered up for consultation at your local family history library. These are also indexes only, and not the memorial/deeds entries themselves.

Established in 1708, the Registry of Deeds holds details of deeds conveying ownership or interests in properties, from transactions such as sales, mortgages, leases, marriage settlements and wills, and was first established as a means to record property held largely by Protestant landowners. The system was not compulsory, and so many transactions were never recorded, whilst for its earliest years it tended to largely record transactions for properties held by adherents to the Church of Ireland. It was not until the late 18th century and early 19th century that Presbyterians and Roman Catholics became better represented within its pages, following the relaxation of the Penal Laws.

The registration system was fairly straightforward. Copies of deeds known as memorials were created after the originals had been signed by both parties. Once verified by a Justice of the Peace and signed by a witness, they were then recorded into the register in Dublin and the original memorials then filed away.

The Registry itself is not the easiest to use, but can yield results with a little perseverance. There are two indexes to act as searching aids, a Land Index and an Index of Grantors, which works better for the more uncommon surnames. The indexes are decennial up to 1785, and annual thereafter. There is unfortunately no index to grantees.... If you are lucky enough to find a relevant entry, you need to note the Transcript Book, page and memorial numbers to consult the original entry.


COMMENT: Thanks to the Registry of Deeds Index Project for the update via its Facebook page at https://www.facebook.com/RegistryofDeedsIndexProjectIreland. This project, to create fully searchable indexes by both grantor and grantee, is continuting to make good progress at 221,907 index entries from 25,211 memorials of deeds. The index can be consulted at http://irishdeedsindex.net/search/index.php.

Irish research continues to get a little bit easier by the day!

For details on my genealogy guide books, including A Beginner's Guide to British and Irish Genealogy, A Decade of Irish Centenaries: Researching Ireland 1912-1923, Discover Scottish Church Records (2nd edition), Discover Irish Land Records and Down and Out in Scotland: Researching Ancestral Crisis, please visit http://britishgenes.blogspot.co.uk/p/my-books.html.
Posted by Chris Paton at 15:55