Back To Our Past in Belfast - review

I’m on way back to Scotland after a fun day in Belfast at the Back To Our Past (www.backtourpast.ie) event at Titanic Belfast. This was the first time the event had come north from Dublin, and the first major family history event I have ever attended back home in Northern Ireland. So how did it go? 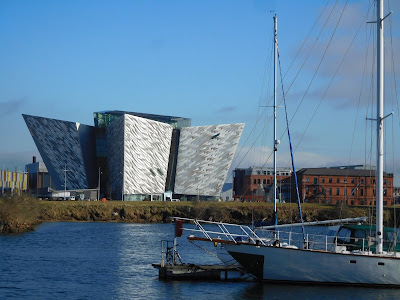 When I arrived at the venue, I have to say that there was little by way of direction in terms of how to get to the event, which was held on the fifth floor of the building. There was a table on the busy ground floor where an attendant handed me a copy of the Belfast Telegraph family history supplement, before pointing me to the lift. But outside the building there was nothing to indicate that a family history event was happening at all, and so it seemed there was little to lure in the casual passers by who might have been tempted to pop in.

This was only my second time in the Titanic Belfast building - and on my previous event I had only been to the attraction’s shop. Once on the fifth floor I was pleasantly surprised to see the event itself was held in the same room where the famous Titanic replica staircase is based - so I obviously had to get the relevant photographs! 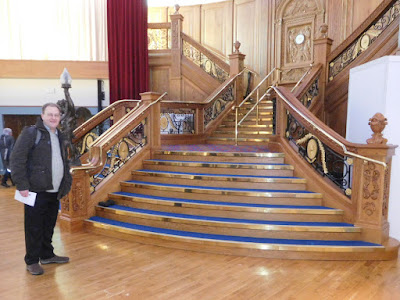 On the genie front, I briefly bumped into John Reid from the Canada’s Anglo-Celtic Connections blog (http://anglo-celtic-connections.blogspot.co.uk), and then had a good catch up with Eddie Connolly of Eddie’s Extracts fame – his site has now been moved to a new domain at www.eddiesextracts.com, having been failed by the Rootsweb platform one too many times. There were many vendors from across Ireland, north and south, including PRONI (www.nidirect.gov.uk/proni), the National Archives of Ireland (www.nationalarchives.ie), the North of Ireland Family History Society (www.nifhs.org.uk), Irish Roots magazine (www.irishrootsmedia.com), the Irish Newspaper Archive (www.irishnewsarchive.com), and many more - and even a fair few folk from Scotland, including fellow Scottish Genealogy Network members (http://scottishgenealogynetwork.co.uk), from ASGRA, Scottish Monumental Inscriptions (www.scottish-monumental-inscriptions.com), and Glasgow City Archives (which now has a new Facebook page at https://www.facebook.com/GlasgowCityArchives). 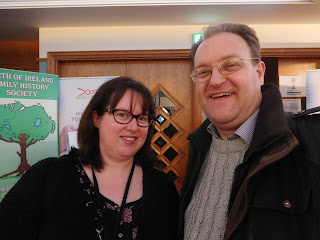 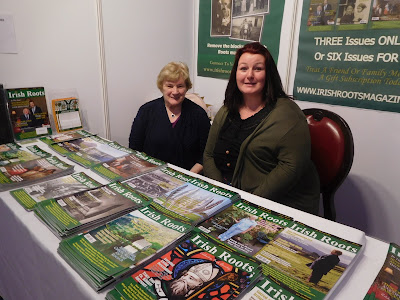 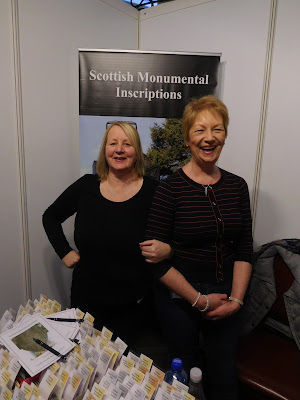 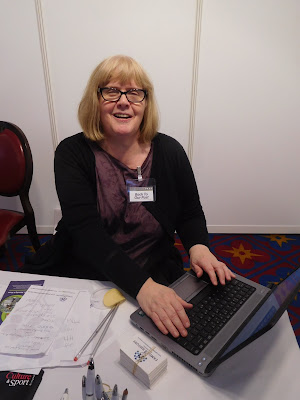 After a brief catch up with a few Irish friends, I gave my talk, Finding the Irish in Scotland, to a packed room – thankfully, as this was my first ever genealogy talk ever in Ireland! The talk seemed to go down well, and the few books I brought with me to sell on the back of it disappeared within minutes (noted for future reference!). 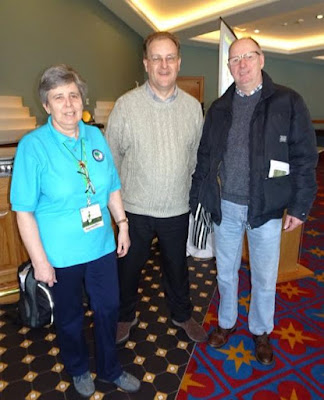 I had a chance to talk to several vendors. The Imperial War Museum (https://www.iwm.org.uk) told me that the Lives of the First World War website (https://livesofthefirstworldwar.org) will be permanently moving over to the IWM platform in spring of next year, its remit to collect ancestral stories from the conflict now almost complete. I also spoke to Niamh McCarthy, a recent textiles design graduate of the University of Ulster (I refuse to call it Ulster University!) who now makes superb custom made embroidered family trees at reasonable prices (see http://www.etsy.com/shop/NiamhDesigns), and Christine Deakin from Co. Waterford based Irish Genealogy Solutions (www.irishgenealogysolutions.com), who supplies folders, wallets, acid free paper, binders, genealogy books and more, for all your genie needs. 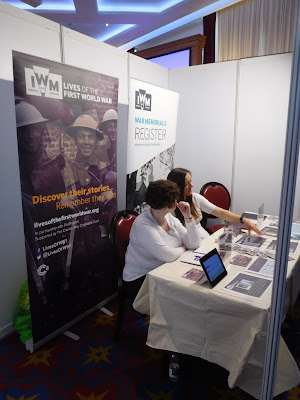 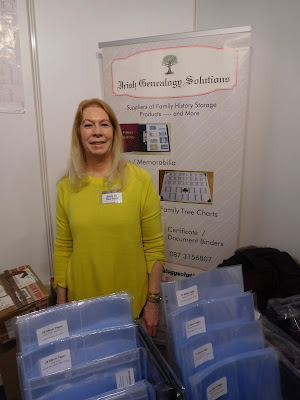 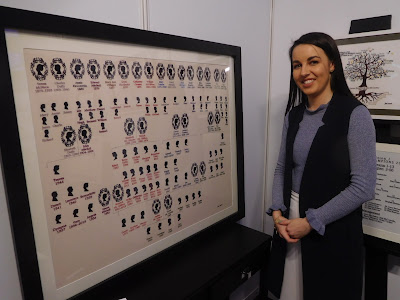 Janet, Stephen and crew from PRONI were having a rare auld time, constantly busy, as was the North of Ireland Family History Society, which I renewed my membership with (I normally do so at WDYTYA Live, but this is now defunct). The NIFHS has a new guide book out on finding Fermanagh based ancestors (which I will review separately). I also caught up with Fintan Mullen at the Ulster Historical Foundation (www.ancestryireland.com), who was equally constantly on the go - the Foundation has a new book out also on Ballymacarrett and the First World War (see http://britishgenes.blogspot.no/2018/02/ballymacarrett-and-first-world-war.html). 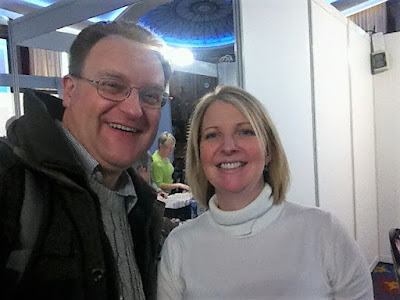 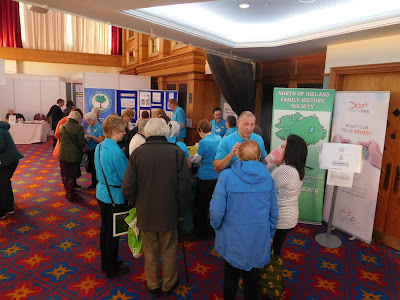 On the DNA front, both FamilyTreeDNA (www.familytreedna.com) and MyHeritage (www.myheritage.com) were active, and there was a separate talks stream on genetic genealogy, although I never got to listen to any of these talks (of the speakers here, I was able to catch up with Debbie Kennett and Michelle Leonard). 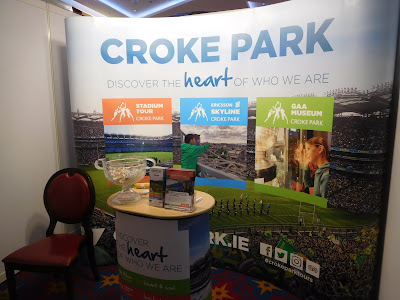 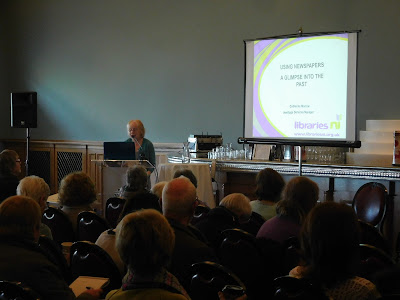 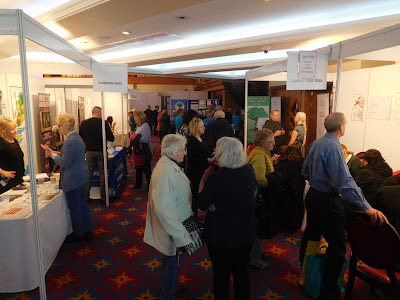 Overall, the event to me was perhaps a bit smaller than I was expecting, and slightly less busy than perhaps it could have been (although I was told it had been busier on Friday), but at times it was still quite busy, and the venue itself on the 5th floor was great. Of the large corporate records agencies, there was sadly no sign of Ancestry, FindmyPast or FamilySearch - but archives and societies were well represented. There was certainly an appetite for the talks (after my own talk ended, I managed to sit in on Brian Mitchell’s useful and well attended session on online resources). 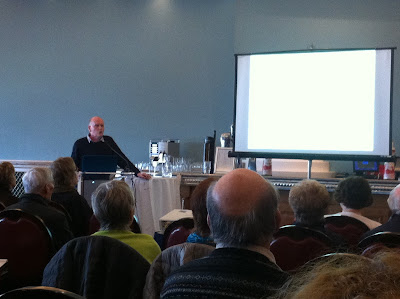 Given a year or two to build up a profile in the north, this could become a good regular fixture in Belfast if vendors were inclined to return, but it did not quite have the buzz of the longer established Dublin based parent event - yet at least. It was a good first event, with lots of future potential, and certainly worth a hop over from Scotland for the day!

Here's hoping the event returns again to the north next year... 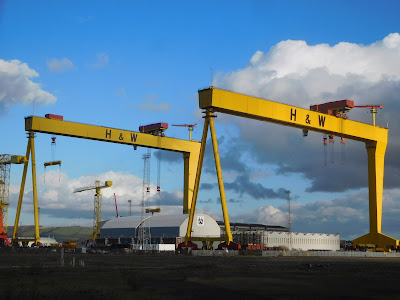 For my genealogy guide books, visit http://britishgenes.blogspot.co.uk/p/my-books.html, whilst details of my research service are at www.ScotlandsGreatestStory.co.uk. Further content is also published daily on The GENES Blog Facebook page at www.facebook.com/BritishGENES.
Posted by Chris Paton at 21:11

Email ThisBlogThis!Share to TwitterShare to FacebookShare to Pinterest
Labels: Back To Our Past, Belfast, Ireland, Northern Ireland, talks