Farewell to Your Family History magazine

The magazine Your Family History, formerly known as Your Family Tree in the UK for most of its existence, is bowing out from the publishing scene with a final issue, number 192, for March 2018. 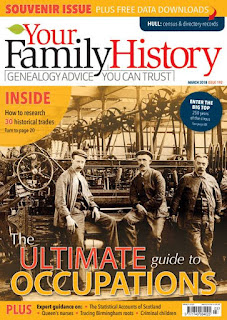 As Your Family Tree, this was the first genealogy magazine that I wrote for, with a case study for issue 40 in 2006 entitled Trapped in Brussels, detailing the story of my great grandfather's civilian family's existence during the German occupation of the city during the First World War. Since that first article was published I have had over 200 articles published in the magazine, including cover features, case studies, questions and answers, opinion columns, and more. There have been many editors, sub-editors, designers, and illustrators who contributed to the publication, and it has been an absolute pleasure to have worked for them all. I am particularly delighted to have an article in the final edition, looking at the Statistical Accounts of Scotland.

Each family history magazine on sale in the high street over the years has had its own unique contribution to make, and YFT in particular was a magazine that was not afraid to preach about the merits of technology within the family history world and the use of online resources, but it also covered all the traditional bases, with how to guides, detailed articles on the most popular and the least well known record collections available, book reviews, and Else Churchill's ever reliable opinion column on a monthly basis. But for me it will always be the magazine that I enjoyed writing case studies for, as with each article an illustration would be produced that in itself became part of my own family record. When my article on the Mount Stewart Murder was published in issue 43, I was so grateful to the editorial team for permission to use the accompanying image in a book on the same subject several years later, and stiull remains one of my all time favourite illustrations. 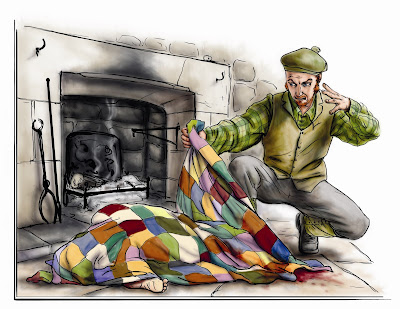 Your Family History as it later became is now passing to the great magazine memorial in the sky, but I want to wish Nell Darby and Andrew Chapman all the very best for the future, as their contribution to the genealogy scene still has a very long way to go!

The magazine is now available on sale in all good high street newsagents.

For my genealogy guide books, visit http://britishgenes.blogspot.co.uk/p/my-books.html, whilst details of my research service are at www.ScotlandsGreatestStory.co.uk. Further content is also published daily on The GENES Blog Facebook page at www.facebook.com/BritishGENES.
Posted by Chris Paton at 15:21

Email ThisBlogThis!Share to TwitterShare to FacebookShare to Pinterest
Labels: magazines