A wee bit of the Dublin Gazette...

A useful resource for British based genealogy is the London Gazette, and its equivalents the Edinburgh Gazette and the Belfast Gazette. They regularly carry official announcements of the state, everything from military promotions to business announcements and more - I always suggest when doing talks on newspapers and genealogy that the gazettes are always worth a punt, as you just never know what you might find, no matter who you are researching! The titles are freely available at www.gazettes-online.co.uk. 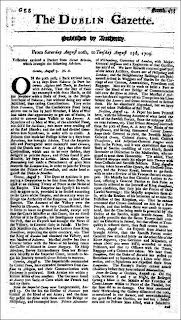 The Belfast Gazette was actually established much later than its counterparts, following Partition in Ireland in 1921. Prior to this the title was actually called the Dublin Gazette. The Belfast Gazette today caters for Northern Ireland, but in the Republic of Ireland the Dublin Gazette was renamed Iris Oifigiúil. It is partially online, but only from 2002 to the present day at www.irisoifigiuil.ie.

The Dublin Gazette is most definitely one of those titles that would undoubtedly make a huge impact on Irish genealogy if it was digitised and made available online, and I have long lamented the fact that it isn't accessible on the internet - however, I've just discovered that a tiny part of it actually is!

The British Library's 17th and 18th Century Burney Collection Newspapers database, accessible by free subscription from many libraries across the UK (here in Scotland simply subscribe to the National Library of Scotland's Licensed Digital Collections), does in fact contain a few years coverage of the Dublin Gazette - albeit it a very few years! Fairly incomplete coverage exists from Aug 1708-1712, 1724-25 and 1797, but only for those years.

The National Library of Ireland's Newspaper Database lists the issues available for consultation at its facility and University College Dublin at www.nli.ie/en/NewspapersDetails.aspx?IndexNo=463.

My new book, Tracing Your Irish Family History on the Internet, is now available from Pen and Sword. My Scottish land and church records ebooks are available at http://www.gen-ebooks.com/unlock-the-past.html, whilst my next Pharos Scottish course, Scottish Research Online, starts Sep 4th - see http://pharostutors.com/details.php?coursenumber=102. Time to smash a few brick walls...!
Posted by Chris Paton at 17:28