From the Churches Conservation Trust (www.visitchurches.org.uk):

A church regarded as ‘Britain’s greatest Masonic secret’ and another described as 'Rip Van Winkle’s church’ are amongst the fascinating buildings which The Churches Conservation Trust will invite visitors to explore, as part of this year’s Heritage Open Days between 12th – 15th September. 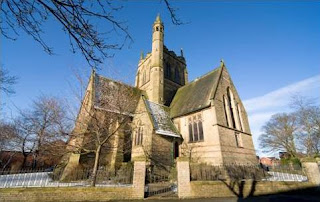 St Edmund’s Church, Rochdale, is regarded as one of the finest but least known gems of ecclesiastical architecture in the country and has been comp
ared to the Medieval Rosslyn Chapel in Scotland - the setting for Dan's Brown's novel, The Da Vinci Code.

These are just two of the notable churches that are rich in history and architecture, and open for the public to see this September. Over four days, The Churches Conservation Trust will give visitors the chance to absorb the architectural wonder and fascinating pasts of a variety of magnificent Medieval, Tudor, Georgian and Victorian churches.

They can visit the partly ruined Holy Trinity Church, Wentworth, South Yorkshire, which started life as a church in the 15th century but was converted to a mausoleum in 1877. Its 16th and 17th century features trace back to the powerful Wentworth family, including the Earl of Strafford and Charles Watson-Wentworth.

The church where Thomas Becket is said to have preached himself, The Church of Saint Thomas a Becket, Capel, Kent, will host a music and arts festival displaying Medieval wall paintings, including Cain and Abel and Christ’s Entry to Jerusalem.

Saint George’s Church, Esher, Surrey, built around 1540, boasts elaborate 18th century carvings, a three-decker pulpit and a pew designed by the Blenheim Palace architect, John Vanbrugh. As well as viewing the interior of this picturesque church, visitors can enjoy a floral take on Heritage Open Days with the North Downs Botanical Artists Exhibition.

Historian and archivist, Stuart Sizer, will host a guided walk around the intricate church site of St. Mary’s, Barnetby, Lincolnshire, whilst at St John’s Church, Stamford, Lincolnshire, visitors can even view a demonstration of the age old practice of Collyweston slating.

The CCT has saved over 340 churches in the past 40 years, preserving and restoring some remarkable examples of architecture for future generations to enjoy. Representing over 1000 years of history, each CCT church building possesses its own exceptional story. They can be found all over England: in the grounds of historic houses and stately homes; in Areas of Outstanding Natural Beauty; close to the coast; in deserted sites in hilltops, and in major cities and pretty villages.

To find a Heritage Open Day near you or for details on these and hundreds more historic churches, visit www.visitchurches.org.uk. Visitors can plan their own day out or use the website to search for ideas, such as combinations of visits to the Trust’s churches with other historic attractions and gardens nearby.

(With thanks to Chloe Hanisko)

My new book, Tracing Your Irish Family History on the Internet, is now available from Pen and Sword. My Scottish land and church records ebooks are available at http://www.gen-ebooks.com/unlock-the-past.html, whilst my next Pharos Scottish course, Scottish Research Online, starts Sep 4th - see http://pharostutors.com/details.php?coursenumber=102. Time to smash a few brick walls...!
Posted by Chris Paton at 05:47