Yesterday I had the real pleasure of attending the Local and Family History Show in Lanarkshire at Motherwell, ably organised by Lanarkshire Family History Society. It was an unbelievably busy day, and one of the most enjoyable I think I've ever attended, certainly in Scotland.

The reason is that there was a noticeably different buzz about yesterday's bash. I spoke to a few of the vendors, and the comments were all similar - "we had no idea it would be this big". I think the reason for this was simple - it did not target the family history community. Instead it targeted 'the community', with a range of experiences for everyone, which even included face painting for kids - a real family fun day out.

Family historians were of course well catered for with vendors and groups there including My History, FamilySearch, Rootschat, the Scottish Military Research Group, Scottish Monumental Inscriptions, ScotlandsPlaces, RCAMHS, family history and local history societies from across the country, and many, many more. Bizarrely, the one group that wasn't there - and very noticeable in its absence - was ScotlandsPeople, or indeed any representation from other groups that form part of Dundee based parent company Brightsolid, such as the British Newspaper Archive or FindmyPast. Sorry guys - on this one, you really missed a trick!

There was also a variety of talks on offer, including a great discussion from the University of Strathclyde's Ali MacDonald on DNA, who runs the Scottish DNA Project, which cleverly focussed in on many names commonly found in Lanarkshire, such as Hamilton and Frame, with some interesting surprises. Ali explained the basics of Y-DNA research, but it was the explanation about the real advances in deep ancestry - and how it's results are getting closer to our more recent origins (which the other more common use for Y-DNA research targets) that was a real eye opener.

Another superb talk was given by historian Professor Richard Findlay on the Union of the Parliaments of 1707. At the start of his talk he noted that the circumstances behind the union were very different to those driving the independence referendum of today. When he then announced he was going to look at the union from an English point of view, there were a couple of comedy groans from the audience - in fact, this was truly the talk's real selling point. On this side of the border we're all used to hearing about the failure of Darien etc, but it was absolutely fascinating to learn that the real reason for the English position was in fact to do with the succession of the monarchy, and the potential that Scottish nobles could choose a separate monarch after the demise of Anne if they so chose to do - and which they threatened to do. This all fed into the wider politics of war with the French and the Spanish succession, all fascinating stuff. A real game of brinkmanship on both sides that finally led to union, but one which could potentially have led to war as much as an incorporated union, so tense were the negotiations. Superb stuff - but of course, irrelevant to the current debate which looks to Scotland's future based on the here and now. 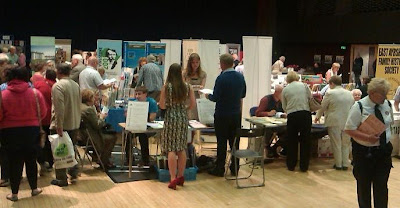 I managed to have a chat with a few groups there - the University of Strathclyde genealogical studies department told me that their series of short evening classes are now available both through online study as well as on an attendance base at Glasgow, whilst Daria Wall from the University of Dundee also reported she had a busy day promoting the Centre for Archives and Information Service's courses. David McNay of the Scottish Military Research Group also explained some major projects currently underway between his organisation and other partners in Scotland for next year's WW1 centenary commemoration (watch this space), whilst Andrew Nicholl from ScotlandsPlaces explained the successful launch of the site's new volunteer transcription project - great to see a crowdsourcing project of such scale in Scotland, transcribing many of the documents found online via the site.

Often I have gone to events in Scotland where the crowds noticeably drop by late afternoon, but this one was constantly busy throughout. One family history society further told me that they had covered their costs to get to Motherwell in the first hour of trading alone. It was a real success, and the other echoing call resounding from across the room was "please do it again next year". I'll certainly add my name to that plea!!!

After the event, the Scottish Genealogy Network held its monthly get together, with I think the largest attendance yet, providing a great ending to an already perfect day.

A seriously HUGE well done to Bob, Gerry, Elizabeth et al at Lanarkshire FHS - and already looking forward to the next one!!! (Hint!) 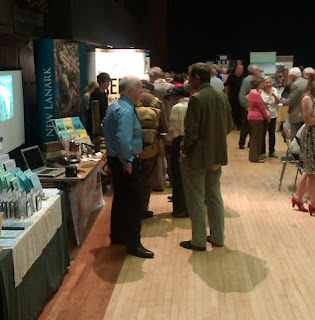 UPDATE: If you were at the event yesterday, please take a minute to provide feedback at http://lfhsfair2013.weebly.com/show-feedback.html - it's very short and sweet!

My new book, Tracing Your Irish Family History on the Internet, is now available from Pen and Sword. My Scottish land and church records ebooks are available at http://www.gen-ebooks.com/unlock-the-past.html, whilst my next Pharos Scottish course, Scottish Research Online, starts Sep 4th - see http://pharostutors.com/details.php?coursenumber=102. Time to smash a few brick walls...!
Posted by Chris Paton at 15:18