The BBC is running a story today about RCAMHS's use of laser technology in the field of aerial archaeology at http://www.bbc.co.uk/news/uk-scotland-24358106. The new technique, employing the LIDAR scanning system (used in the past by the RAF amongst others), uses sound waves to create images of a landscape which can be manipulated on a computer in 3D, and then lit in certain ways to help reveal hidden physical features in the landscape, long abandoned across time. 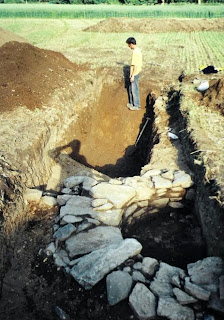 Aerial archaeology is something I just happen to know a wee bit about, as I helped to create a TV series utilising the concept a decade ago for BBC2, which ran for 2 series (it was called Time Flyers), and on which I directed three episodes. For the pilot programme, we were initially going to do a story based on crop marks found within the Yorkshire Wolds in England, but were defeated by the foot and mouth epidemic ongoing at the time (the programme was subsequently made when the series was commissioned). The story chosen for the pilot was therefore one based at Castle Menzies in Perthshire - and it was inspired by an RCAMHS aerial archaeology find. A crop mark to the east of the main castle, which looked like a tennis court, was later discovered to in fact be part of a formal garden which was destroyed during the Forty Five rebellion by the Duke of Cumberland. Crop marks form when features buried beneath the ground mean that there is less soil above them than in the surrounding terrain where the soil is undisturbed, therefore less moisture for the crops, affecting their growth rate (or if a ditch has been filled in, there's more soil above it, meaning more mositure for the crops above it). Bottom line is that the growth rate of the crop above the feature is different, meaning that you get a relief image of the feature, especially when the ground is parched of water in a dry period. See http://canmore.rcahms.gov.uk/en/site/84804/details/castle+menzies/ for the image of the crop mark

In another instance, I recently used the site to look up a place in the parish of Dores in Invernessshire. I had found a farm there bearing the name of a settlement my family lived in at the middle of the 17th century, but the aerial image actually revealed some deserted settlements in an adjacent field, meaning that the modern building may not necessarily be the actual one the family stayed in. All useful contextual stuff!

RCAMHS is absolutely stuffed with aerial images via its CANMORE database, but I thought I'd take this opportunity to point out one of the best things about Canmore - it's interactive. You can actually upload your own images to the site. In this case, as a pay back for RCAMHS image we used in the Time Flyers pilot (which was not broadcast as we made changes to the presentation team) I uploaded a couple of images to show the details found in the excavation of the Castle Menzies site - you can see these on the same page quoted above, by clicking on the Public Contributions, Photos link that shows the number 2.

I've uploaded other material to the site - see http://canmore.rcahms.gov.uk/en/site/28432/contribution/perth+priory+chapel+and+hospital+of+st+leonard/ for example, where I have added an old postcard image of a place called Carr's Croft in Perth, along with two pages of text from a dissertation describing various land transactions on the site in the 19th century.

If you are doing a one place study, RCAMHS may well be a brilliant source of info - and you can also add to the database to build up a truly impressive national resource for Scotland!

NB: For other resources for land and house based research in Scotland (where the law has historically been very different to elsewhere in the UK), don't forget my book Discover Scottish Land Records, available in print format from http://www.gould.com.au/Discover-Scottish-Land-Records-p/utp0283.htm or in ebook format from http://gen-ebooks.com.

My latest book, Discover Scottish Civil Registration Records, is now available from http://www.gould.com.au (print) and http://www.gen-ebooks.com/unlock-the-past.html (ebook), whilst Tracing Your Irish Family History on the Internet is available at http://www.pen-and-sword.co.uk/Tracing-Your-Irish-History-on-the-Internet/p/3889/. My next Pharos Scottish course, Scotland 1750-1850: Beyond the OPRs, starts Nov 13th - see http://pharostutors.com.
Posted by Chris Paton at 11:38