At the end of each year I normally look back over the previous 12 months to see what major genealogy developments have occurred. I'll not be doing that this year, as to be frank, this is one year I really want to move on from quite quickly, due to the recent illnesses and losses of both my mother and godmother (my aunt Sheila). These have impacted quite a bit on the blogging I have been able to do, as well as my research service which has been disrupted quite badly over the last few months, though which I am thankfully now getting back on top of. I still hope I have been able to record the most important developments in the UK genealogy scene, however - to review changes and developments for yourself over the last year, simply access the list to the left hand side of this blog, search by keyword, or use the long list of tags that can be found to the right hand side of the screen.

To all the readers, vendors, societies and organisations a big thank you for all the notifications about developments that you have asked me to mention, please do keep them coming. A thank you also to the ever growing army of genealogy bloggers making the daily geneasphere a worthy read, who often pick up on things I have not, and to whom credit is always given if I do refer to their posts. To all those I have written articles for over the last year, again a big thanks, and to all my clients, and to the students through the Pharos courses I teach, I hope the lessons have been of some assistance. Big thanks also to Bob and Liz Blatchford, for the craic at London and Newcastle, and to Tahitia, Graham and Ali at Strathclyde University for pushing the boundaries of the best academic genealogy courses in Britain.

Some of my biggest thanks should go to my fellow professional genies here in Scotland, who through the new Scottish Genealogy Network are transforming how we see ourselves as a profession, helping each of us to be better than we already are at what we do. When I first started as a genie a few years back there were a few groups ready to take a fee and dictate how things should be done, but who offered little to those who wished to better themselves, to keep learning, and to regularly network, not just online, but on a face to face basis. Where before genealogy in Scotland was an isolated career option for those based outside Edinburgh, there is now a thriving group of members based across Scotland that has taken the bull by the horns and created a professional community with the sole aim of helping ourselves. This year we've had two absolutely fantastic continuous professional development days at the University of Stirling, and held many meetings at archives, institutions and events across the country, with plenty more to come. In 2012 we set ourselves up, in 2013 we found our feet - who knows where we'll be by the end of 2014?!! Thanks to all of you, the best genies on earth! :) For more on the network visit http://scottishgenealogynetwork.blogspot.co.uk. 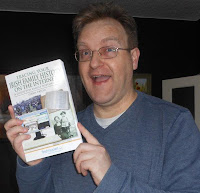 Each year at this point I seem to say that the next is going to be even busier, and once again there is no let up on that front! I have a new book coming out shortly from Pen and Sword, with another partially written already for Unlock the Past, and others to come. On the talks front I have several in the near future to give in Scotland, but am also heading on three international genealogy based trips in the next seven months to Australia (with Unlock the Past), Portugal (with Lost Cousins) and Canada (Ontario Genealogy Society), not to mention speaking at the Who Do You Think You Are Live even in London. For the first time in many years I won't be working on a stall at the show, which means I will have more time on my hands to get up to speed with developments in the UK genie world, and to hopefully return to getting some AV material recorded for this blog with some of the great and the good. I might even finally get to attend a talk at the show (I've never had a chance to before!). I'm also looking forward to getting back to Belfast soon for more user forum meetings at PRONI (www.proni.gov.uk), with a great bunch of people speaking with God's own accent. One of the major successes of the last year has been the virtual revolution in my Irish family history research thanks to some major developments in Belfast, mainly from PRONI. If, like me, you parked your Irish research years ago with an air of despondency at how Ireland didn't get the genealogy thing in the way that the rest of humanity did, trust me, things are changing enormously!

2014 is also going to be a major year here in Scotland - in nine months time it is entirely possible that the United Kingdom as we currently understand it may be redefined, should Scotland decide to vote for independence (though independence itself would not happen until 2016). Whichever way the vote goes, Scotland is still in Britain, and as genealogy deals with the past there won't be any need to change the remit of this blog - so this blog will continue, come what may. We also have another Homecoming Year in Scotland in 2014, the centenary of the start of the First World War, the Commonwealth Games, and even the start of working trams in Edinburgh (at last!).

So a Happy New Year to one and all, but the final thanks goes to my mum. Her illness was very sudden, and she went far too quickly at the age of just 63, but she was one woman who was always serious about what she did, though not necessarily in the way that she did it, and I fully intend to carry on that fine tradition! I wrote a wee post about her shortly after she passed on my other blog at http://walkingineternity.blogspot.co.uk/2013/12/rip-mum-charlotte-harper-graham-1950.html - she was a special woman and thanks is nowhere near enough to express my gratitude for all she did for me in her life, but it is expressed nonetheless.

My latest book, Discover Scottish Civil Registration Records, is now available from http://www.gould.com.au (print) and http://www.gen-ebooks.com/unlock-the-past.html (ebook), whilst Tracing Your Irish Family History on the Internet is available at http://www.pen-and-sword.co.uk/Tracing-Your-Irish-History-on-the-Internet/p/3889/.
Posted by Chris Paton at 17:24