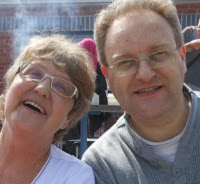 A word of apology for the lack of posts on British Genes for the last twelve days or so. On Thursday 28th November 2013 my mother, Charlotte Harper McKeown (formerly Paton, nee Graham) passed away in Manchester, England, just three hours after I was able to get to her home from the west of Scotland. She had been suffering from bladder cancer, which was diagnosed in May, and she put up one hell of a fight, but sadly lost the battle in the end. I was alone in the room with her as she passed away, telling her about the progress of her two grandsons at school, and watched as she slipped away peacefully. I've been in England since then organising the funeral and cremation with my stepfather, and only returned home to Scotland last night.

I will resume normal posting tomorrow - but for today I just want to direct those who may be interested, or who may have known her, to a post I have written on my other blog at http://walkingineternity.blogspot.co.uk/2013/12/rip-mum-charlotte-harper-graham-1950.html

My latest book, Discover Scottish Civil Registration Records, is now available from http://www.gould.com.au (print) and http://www.gen-ebooks.com/unlock-the-past.html (ebook), whilst Tracing Your Irish Family History on the Internet is available at http://www.pen-and-sword.co.uk/Tracing-Your-Irish-History-on-the-Internet/p/3889/.
Posted by Chris Paton at 14:16

Email ThisBlogThis!Share to TwitterShare to FacebookShare to Pinterest
Labels: obituary