On tour down under with Unlock the Past

In four weeks time I'm heading for a brief visit to Dubai to see my brother, and then flying onto Australia to take part in the now fully subscribed fourth Unlock the Past Genealogy Cruise, which takes place from February 4th-13th (see http://www.unlockthepastcruises.com/cruises/4th-cruise/).

Whilst the cruise itself has a packed agenda of talks, I will also be giving talks at seven shore based venues both before, during and after the cruise, along with fellow international presenter Thomas MacEntee and Unlock the Past stalwart Rosemary Kopittke, and joined by Noeline Kyle (at Adelaide, Hobart and Sydney), Tiggy Johnston (at Adelaide and Hobart), and Jane Taubman (Sydney).

Full details of this talks tour, with the talks programme at each venue, admission costs/ticketing and biographies on the speakers, are available at http://www.unlockthepast.com.au/events/chris-paton-and-thomas-macentee-downunder/brisbane.

The following is a summary of the talks I will be giving, and details of the venues themselves: 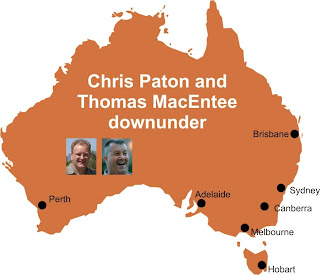 This will be my fourth visit to Australia since 2007, and my third giving talks - I am looking forward to a good few days in Brisbane before kicking off (I'll be staying with a cousin for a couple of nights before we get going!), meeting folk in Canberra, Adelaide and Hobart, cities I have not visited before, returning to the Paramatta RSL (were I previously spoke in 2010), the Celtic Club in Melbourne (my uncle's a member, and my first time speaking in the city!), and a return to the State Library in Perth, where I did some personal research in 2010. At each venue I will be present for the full duration, so will be more than happy to talk about Irish and Scottish research problems between talks, though I have to apologise in advance that I will be leaving early after my two talks in Melbourne to catch up with family for the afternoon before rejoining the boat.

A range of Unlock the Past publications (including from yours truly) and other genealogy materials will be on sale at the venues.

It's going to be fun both on board and ashore - hopefully we'll see you a few of you there!

My latest book, Discover Scottish Civil Registration Records, is now available from http://www.gould.com.au (print) and http://www.gen-ebooks.com/unlock-the-past.html (ebook), whilst Tracing Your Irish Family History on the Internet is available at http://www.pen-and-sword.co.uk/Tracing-Your-Irish-History-on-the-Internet/p/3889/.
Posted by Chris Paton at 12:56

Email ThisBlogThis!Share to TwitterShare to FacebookShare to Pinterest
Labels: Australia, cruises, Ireland, Scotland, talks, UK, Unlock the Past, US