I've just come across an interesting Irish crowd sourcing humanities project entitled Letters of 1916 at http://dh.tcd.ie/letters1916/. From the site:

The Letters of 1916 project is the first public humanities project in Ireland. Its goal is to create a crowd-sourced digital collection of letters written around the time of the Easter Rising (1 November 1915 – 31 October 1916).

The first two months of the project were very successful! Over 500 letters has been uploaded from both, national Institutions and private collections. The Letters 1916 team is identifying, photographing and preparing hundreds more for upload. 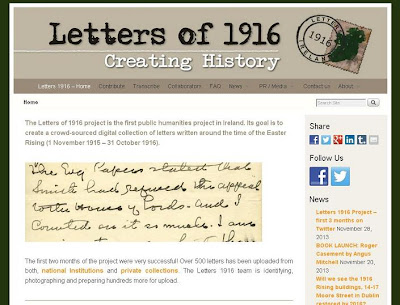 The letters themselves, of which there are hundreds awaiting transcription on the site, are not necessarily about the Rising, but about all aspects of society in Ireland in this period - a genuine 'slice of life' from the country at that period. Some concern the First World War, others are love letters, many concern last letters before death, and so on. A fascinating resource from Trinity College Dublin, with support from the Department of Arts, Heritage and the Gaeltacht, the European Commission and many others.

From a press release issued at the end of September:

Ireland’s first crowd-sourced humanities project, The Letters of 1916: Creating History, aims to create a large scale digital collection of letters written for the six months before and after the Easter Rising. The project will lead to the creation of an online archive of letters created by the public for the public, which will be launched in 2016.

Members of the public are being invited to include their family history in this important archive by uploading pictures of letters and related photographs hidden away in boxes, cupboards and attics to the database on the website