REVEALED FOR THE FIRST TIME:
Personal medical records of WW1

To mark this month’s centenary of the devastating First World War battle of Ypres, military genealogy website Forces War Records has released newly transcribed versions of the medical and hospital records of 31,000 men who fought along the Western Front. Available now, these rare accounts, from the 51st Field Ambulance, comprise just the first tranche of 1.5 million the company has recently discovered - and is now transcribing. They are archive gems for those researching their family history.

Apart from documenting the men’s names, service and medical details and movements, whether returned to the Front, sent back to Blighty, or ending in death, they also shed light on a grisly line-up of the top 20 most common injuries and ailments suffered by the men, from expected conditions such as trench foot and mustard gas poisoning, through to more surprising ones, including lice (97 per cent of men were infested), scabies and sexually transmitted diseases. 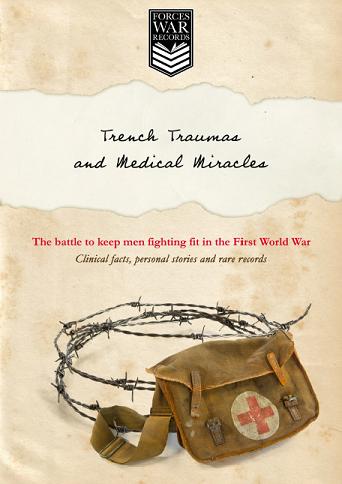 An e-book: Trench Traumas and Medical Miracles, has also been published. Compiled by Forces War Records’ expert researchers and downloadable free from www.forces-war-records.co.uk, it explains and adds further context to these rare documents. The e-book paints a picture of everyday life on the front line and explains the ‘chain of evacuation’: how and where these men were patched up (or not) and what was done with them next.

It also catalogues the legion of problems the medical practitioners saw on a daily basis, with many soldiers suffering from a combination of conditions at once.

In addition to battlefield traumas, social diseases also took their toll. Sexually transmitted diseases were rife as soldiers visited French brothels looking for warmth, comfort and a release from the horrors of the trenches.

Besides the ‘top 20’ list, additional common hazards of war included deafness from artillery fire, bayonet wounds, tonsillitis, haemorrhoids, in-growing toenails, even broken dentures and glasses. Many self-inflicted wounds (some imparted in a bid to escape front line duty, a punishable offence) were also recorded – and the Forces War Records team noted a number where ‘injury with pick-axe’ was cited.

The team found the records to be quite inconsistent. For instance 300 men could be affected by mustard gas on one day, but then there were quiet days where non-emergencies such as tooth decay were treated. One entry that stood out was a soldier who contracted gastroenteritis after drinking fetid water from a shell crater, such was his desperation to slake his thirst.

But there were lighter moments, such as muscles sprained from football matches and an unfortunate Private Crack who’d been shot in the buttocks.

Significance of the records
The records, the originals of which are stored at the National Archives in Kew, have not been transcribed before now since they are handwritten, many in faint pencil or with lots of abbreviations, and therefore very difficult to read and interpret. Methods of recording and fluctuating levels of accuracy between the 100 year old books also made the records challenging to decipher, even for Forces War Records’ specialist data entry staff.

In some cases the field ambulance record may be the only existing proof that an ancestor fought in the war, as it can be hard to find information on men who were injured in the war but survived.

This first collection we have digitised is from the 51st Field Ambulance, a mobile frontline medical unit that would have been based about 400 yards behind the Regimental Aid Post. It would have had special responsibility for the care of casualties from the 17th Division (an infantry division of between 12 and 14,000 men from many different regiments). It was the most forward of the RAMC units dealing with these troops, and the first line of documentation for casualties.

(With thanks to Nicki Giles and Dominic Hayhoe)

Now available for UK research is the new second edition of the best selling Tracing Your Family History on the Internet: A Guide for Family Historians, whilst my new book British and Irish Newspapers is also now out. And please consider purchasing the great new version of Caledonia by The Libations at 79p via www.caledonia2014.com - all profits go to help fund Scottish foodbanks
Posted by Chris Paton at 17:54