A wee post that might be of interest from my other blog, first published in January 2011 - enjoy!

The Scottish kirk had a very traditional outlook on things - if it was enjoyable, then the Calvinist medicine of "thou shalt not" should be applied. Wedding celebrations were most definitely a case in point.

According to George Penny's 1832 book "Traditions of Perth", there were three types of wedding prevalent in the 1830s in Perthshire - the free wedding, where only a few select friends were invited and the guests were not to be the cause of any expense; the dinner wedding, where a dinner was provided by the marriage party, and the penny wedding (also known as the penny bridal), where each guest contributed financially or by way of food towards the dinner and then paid for their own drink, and which by the end of the festivities (which could go on for several days) could yield a tidy profit for the newlyweds. The latter type of wedding was particularly common across rural Scotland, and virtually everyone in the parish was invited. Of course, the Kirk hated penny weddings, and there are plenty of scathing comments about them in the first Statistical Accounts recorded in the 1790s (online at http://stat-acc-scot.edina.ac.uk/sas/sas.asp?action=public&passback=).

The Reverend Alexander Johnston, minister of Monquhitter in Aberdeenshire, noted in a supplement to his account that the

"scene... which involved every amusement and every joy of an idle and illiterate age, was the Penny Bridal. When a pair were contracted they, for a stipulated consideration, bespoke the wedding dinner at a certain tavern, and then ranged the country in every direction to solicit guests. One, two, and even three hundred would convene on these occasions to make merry at their own expense for two or more days. This scene of feasting, drinking, dancing, wooing, fighting, was always enjoyed with the highest relish, and until obliterated by a similar scene, furnished ample materials for rural mirth and rural scandal. But now, the penny bridal is reprobated as an index of want and money and of want of taste." 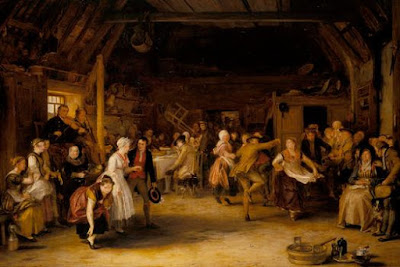 The Kirk was never happy at the prospect of such fun at a wedding, and had for years been fighting to deter such activities. The following example of record of a marriage being contracted from Methel Hill in Fife on May 18th 1694 shows a good example from a century before (source: NRS OPR M 459/00 0050 Wemyss 18 MAY 1694):

The whilk day was contracted in order to Marriage Patrick Dunsyre to Janet Lumbsdale both in ys paroch & pledged them [..] dolers & David Lambsdale in methel hill became caution yt yr sould not be promiseray dancing at yr wedding married 18 of may

In this case David Lambsdale was asked to be the 'cautioner' (pronounced 'kayshuner'), i.e. a 'guarantor' that there would be no 'promisary dancing' at the wedding!

There was also a great deal of superstition held onto at weddings. Some people refused to marry on the unlucky day of Friday, though in some parts this was a lucky day! Many also refused to marry in January or May, with May 14th in particular deemed to be particularly unlucky - many people noted the day of the week on which it fell and refused to marry on that same day when their ceremony took place later in the year. Conversely, for some, April and November were deemed to be extremely lucky months in which to marry! Many also refused to carry the proclamations of banns (which had to be called three times prior to a wedding) over into a new year, and for some even the nature of the moon or the tide was a factor in deciding when to perform the ceremony.

So when you find the date of your ancestors' weddings, there may be much more significance to the date chosen than at first may meet the 21st century eye, and the subsequent celebrations may have damned them for ever in the eyes of the very minister who performed the rites!!

My book Discover Scottish Church Records covers this and more - available in Australia from www.gould.com.au/Discover-Scottish-Church-Records-p/utp0281.htm or in the UK from www.my-history.co.uk/acatalog/Unlock-the-Past-Booklets.html