Unlock the Past Baltic genealogy cruise - Days 4 to 6: Germany and Estonia

In the first part of my report on the Unlock the Past genealogy cruise to the Baltic (http://britishgenes.blogspot.co.uk/2015/07/unlock-past-baltic-genealogy-cruise.html), I discussed our departure from Southampton, our first port stop at Zeebrugge and my trip into Bruges, and then several of the lectures that I attended in our first full day at sea. On Day 4 we reached our second port stop - Warnemünde, Germany. 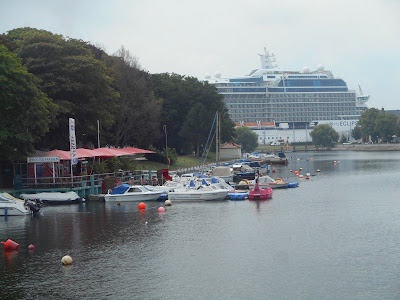 The Celebrity Eclipse docked there at 9.30am, and we were due to leave Germany again at midnight. Several of the cruise passengers opted to travel on a tour of local sites, some decided to make a day of it at Warnemünde itself, but this was too good an opportunity to miss to do something a bit more ambitious personally. For years I have been researching a First World War British civilian prisoner of war camp near Berlin called Ruhleben, a place where my great uncle John Paton was interned, but I had yet to even make it to Germany. There are several archival resources in Berlin that I wish to consult, and I also need to visit the site itself at some point, even though the original race track at Ruhleben, used as the POW camp, no longer exists. Realistically however, I was never going to achieve all of this on our short stopover in Germany, as the train journey was three hours in each direction just to get to Berlin. I therefore decided to spend today as a tourist in the German capital, and to use the day as a 'getting to know the city' type recce, in preparation for a return trip in due course. 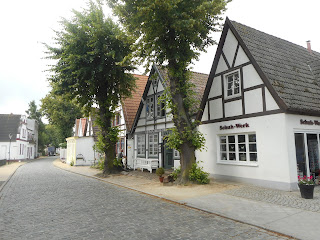 Joined again by Tony Beardshaw from My History, we decided to have a quick look around Warnemünde itself first, before heading into Berlin. Warnemünde is a beautiful wee seaside town, which seems to be the place where Berliners and others travel to when they want a nice day at the seaside. The first thing that struck me was just how clean and tidy the place was - in fact, this was something that struck me about all of the stops we visited on the cruise. The locals were extremely friendly, and I managed to pop my head into a quaint little museum called the Museum of Local History, or Heimatmuseum (http://heimatmuseum-warnemuende.de). This was built in an old house dating back to 1767, originally in the hands of the Wendt family, and then from 1830 the Jungmann family. It looked to be a great wee museum, but sadly I only had time to poke my head around the door for a quick look, though managed to grab a leaflet on its history before leaving. 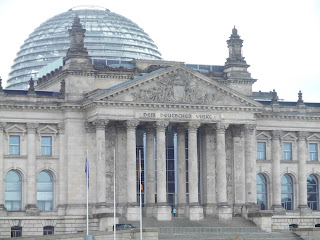 I then spent three hours on the train into Berlin, and was surprised at how much the surrounding countryside looked like that back in Britain, it could easily have been the English countryside that we were journeying through (not least because of the rain!). We eventually got into the city just after 1pm - crikey, I had finally made it to Berlin! The first thing that hit me about the city was just how wide the streets were, and how open the place was. It was not until we left the station and made our way to the Reichstag that I suddenly twigged why it really looked so different to many other European capitals that I had previously been to. Apart from the Reichstag itself, there were virtually no old buildings - just about everything I saw was constructed after the Second World War. When you consider the devastation that the city suffered in the last insane days of that conflict, you can understand why - see my previous post at http://britishgenes.blogspot.co.uk/2015/05/colour-film-footage-of-berlin-from-july.html for a sobering video showing the devastation in July 1945. 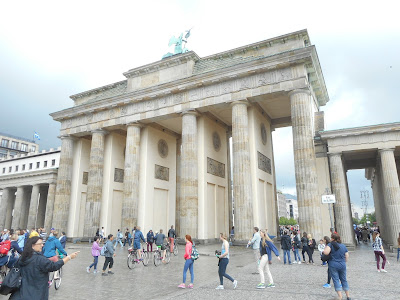 With some long forgotten German retrieved from somewhere inside my head (I studied it for three years at school, but have never used it since!), I was able to get directions from a passer by to the Reichstag, and after snapping a few pics there we made it to the Brandenburg Gate. After this we had a spot of lunch (i.e. a German beer!) and then headed towards Checkpoint Charlie, before which we stumbled onto one of the real gems of our hit and run visit - a large preserved section of the old Berlin Wall. 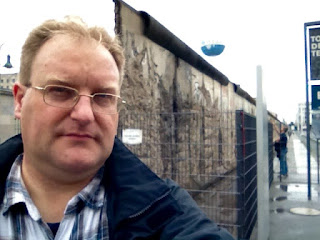 It was quite a shock to suddenly come across the wall, not least because of how flimsy it looked as a structure, but also to see it quite literally partitioning a street in half. The great thing about it, however, was the way that it had been preserved and turned into an open air museum explaining the rise and fall of Nazism and the subsequent Russian occupation of the eastern half of Germany. I can only imagine the amount of soul searching that Germany must have gone through since 1945, but here in unmitigated terms was the story placed on display for the world to see, recognising the wrongs of Nazism, the brutality of the Russian occupation and eventual reunification. This was one of the highlights of the whole trip, but again, due to time constraints we had to forego a visit into the adjacent Topographie des Terrors museum (www.topographie.de/en), something I will definitely explore further on my next trip.

We proceeded to Checkpoint Charlie, the former gateway between the Russian and Allied occupied sectors of the city - nice to say I'd been there, but in truth there was not a lot to see - and then made it out to the Jewish Museum Berlin/Jüdischen Museum Berlin (www.jmberlin.de/main/EN/homepage-EN.php). Again, due to time constraints I did not have a lot of time to spend here, but I still paid the 8 Euro entry fee to have a quick look around inside, albeit spending only ten minutes there before having to leave to get to the train station for our return trip to Warnemunde. Inside the museum, however, I did get to see many of harrowing artefacts detailing the lives of the Jews in Germany who were slaughtered in the death camps by the Nazi regime. Again, next time I make it to Berlin I definitely intend to spend a bit more time here. 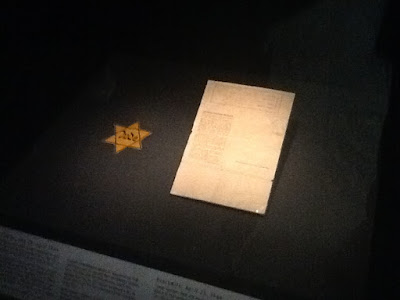 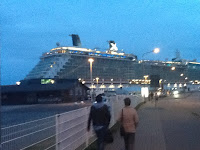 Following this Tony and I legged it by foot across Berlin to get back to the train station to get the express train that would take only two hours back to Warnemunde - and missed it by a single minute. There was only one thing for it then, and that was to have another German beer, after which we got the three hour journey back, reaching the boat by ten o'clock. A great day out, and one that has only whetted my appetite more for a return visit in the very near future.

On Day 5 we were at sea all day, and so another full talks programme. I attended a presentation on Flip-Pal by Gordon Nuttall - interesting, but whilst it is a useful and clever device, I still don't see that it would be one that I would personally use that often. I also attended a useful talk by Rosemary Kopittke on directories and almanacs, and then Janet Few's interesting talk on 'Til Death Us Do Part, causes of death from 1300-1948. After Paul Milner's session on English parish registers (accompanied by a book of the same title - see www.my-history.co.uk/acatalog/Discover-Scottish-Land-Records-UTP0561.html#SID=876), I then gave my talk on Irish Records Online, including news of the new Roman Catholic registers site from the NLI at http://registers.nli.ie, which seemed to be well received.

The highlight of the day was. by a long shot, An Evening with Master Christopher: 17th century barber surgeon. For this, Chris Braund and Janet Few donned period costumes to explain the life and times of a typical 17th century barber surgeon, with many volunteers drawn from the audience to be 'operated on' - yours truly included, for an apparent complaint down below that I never knew I had and hope to God I never ever do, if Chris' treatment is anything to go by! Suffice to say that if this had been for real, the treatment would have left me singing several octaves higher. It was a hilarious talk, and one that was the talk of the boat for many days to come. 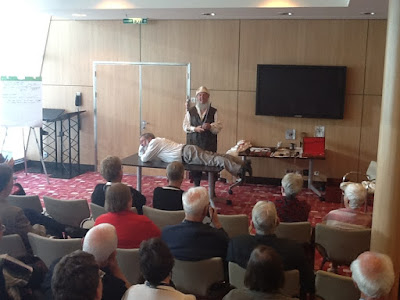 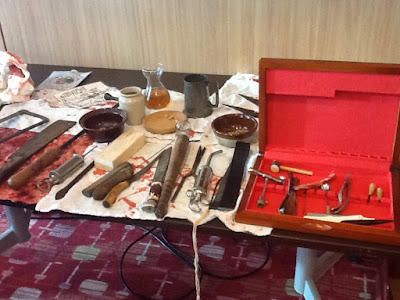 Day 6 then saw us arrive in Estonia, at the port of Tallinn, another first for me, and an absolutely extraordinary place. 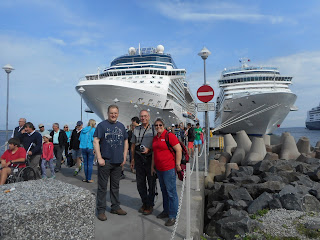 The old town of Tallin was a brief walk from the boat, and a magical step back in time to the medieval period, with some beautifully preserved buildings in the old walled fortress town. I managed to climb the tower of Saint Olav's Church (www.oleviste.ee), nearly killing myself with the effort to get up the tiny cramped spiral staircase - only to have my spectacular achievement humiliated by the discovery of a very elderly rotund female volunteer at the base of the spire, sitting in amongst the rafters in an attendant's box, calmly knitting away - she clearly does this every day effortlessly, in the exact same way that I don't! But what a view - an unbelievable place. 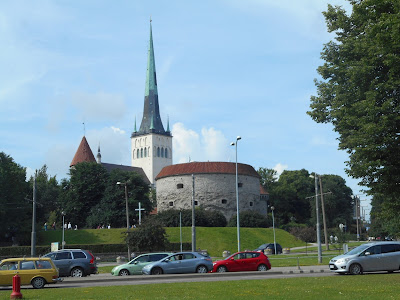 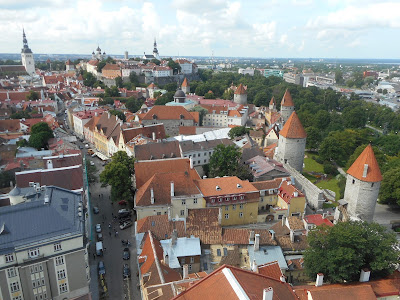 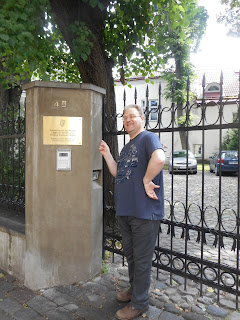 We passed on an opportunity to visit the Museum of Estonian Drinks Culture, but found many hidden gems amongst the town's tights streets and hidden closes, including the Irish Embassy, an old German building with a war memorial dedicated to Germans killed in the region between 1918 and 1920, the period of the Estonian War of Independence, as well as a memorial to the British Royal Navy from the same period at the Estonian Maritime Museum (www.meremuuseum.ee/et/). We tend to think in the UK that the First World War ended in November 1918, but there was still plenty of unfinished business at that point in parts, and the UK continued to be involved beyond this point. A drink of Saku beer at the city's Freedom Square was followed by a further dander back to the boat, where on the way back I bought my wife a small necklace with an amber based pendant attached. The girl who sold it to me was a Russian, so I had a quick chat to her about life in Estonia. Her English was much better than mine, very impressive, and very friendly. I learned from her that the Estonian word for 'thank you' was 'tänan', and the Russian equivalent was 'Спасибо', pronounced 'Spa-see-ba', both of which I used for the rest of the day. 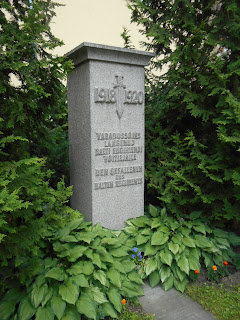 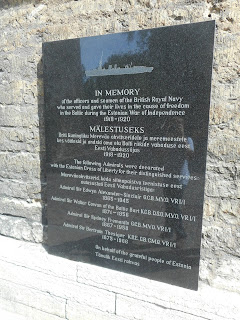 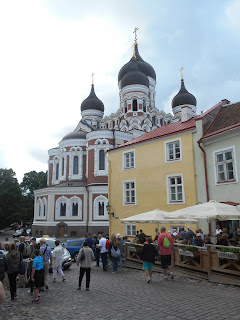 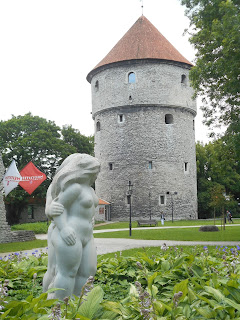 We returned to the boat for a prompt 5pm departure, and after dinner I attended Cyndi Ingles talk on Google Maps and Google Earth, from which I learned of a useful tutorial site available at https://mappingwithgoogle.com, which I will need to have a play with. 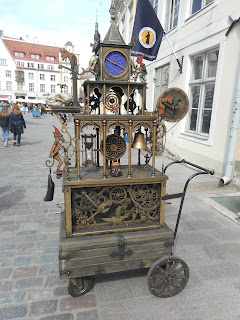 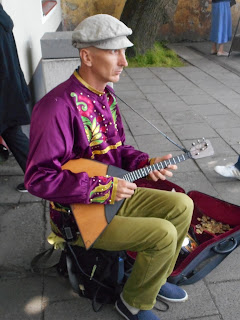 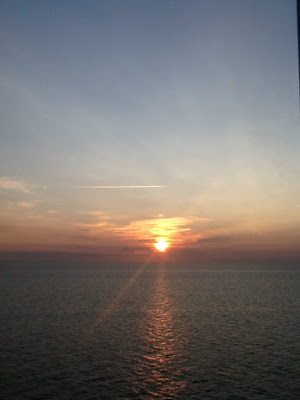 Unlock the Past Baltic genealogy cruise - Days 1 to 3: From Southampton to Bruges
http://britishgenes.blogspot.co.uk/2015/07/unlock-past-baltic-genealogy-cruise.html

For details on my genealogy guide books, including my recently released Discover Irish Land Records and Down and Out in Scotland: Researching Ancestral Crisis, please visit http://britishgenes.blogspot.co.uk/p/my-books.html.
Posted by Chris Paton at 14:06

Email ThisBlogThis!Share to TwitterShare to FacebookShare to Pinterest
Labels: cruises, Europe, museums, Unlock the Past