The only Forgotten Voices book from the IWM that never clicked with me was Forgotten Voices of the Falklands, as I think it assumed too much of its readers in terms of what happened chronologically. This new book from The History Press looks like it might do the job to redress that: 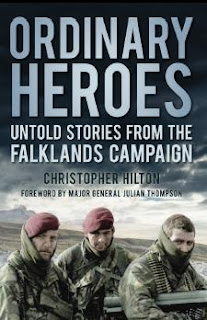 In 1982, 8,000 miles from home, in a harsh environment and without the newest and most sophisticated equipment, the numerically inferior British Task Force defeated the Argentinian forces occupying the Falkland Islands and recaptured this far-flung outpost of what was once an empire. It was a much-needed triumph for Margaret Thatcher’s government and for Britain.

Many titles have been published on the Falklands War, some offering accounts from participants in it. But this is the first one only to include interviews with the ordinary seamen, marines, soldiers and airmen who achieved that victory, as well as those whose contribution is often overlooked – the merchant seaman who crewed ships taken up from trade, the NAAFI personnel who supplied the allimportant treats that kept spirits up, the Hong Kong Chinese laundrymen who were aboard every warship.


Christopher Hilton was an author and former journalist (for the Daily Express, Sunday Express and Daily Mirror). He was the author of more than sixty books, including Hitler’s Olympics, The Wall and After the Berlin Wall.

(With thanks to Christian Bace)