Unlock the Past talks in Melbourne

Today was my first shore based talks venture since the start of the fourth Unlock the Past cruise (www.unlockthepastcruises.com), this time at the Celtic Club in Melbourne. We had slight problems with two of our presenter team, who had both fallen ill and had therefore remained on the boat, but the gaps in the programme were filled at the last minute by Brisbane based genie Helen Smith, and Kirsty Gray from England.

As I was planning to catch up with family in Melbourne, it had been arranged that I would kick off the morning with two talks, The Godly Commonwealth: Discover Scottish Church Records, and British and Irish Newspapers. We had yet another packed room, and always one to sense an opportunity, I had a bit of fun with them at one point when discussing the history of the Church of Scotland. For the first hundred and thirty years after the Reformation of 1560, there was a power struggle within the Kirk between one wing which wished to remain Episcopal – ruled by bishops and a hierarchy – and the Presbyterian wing, where the congregation controlled its own affairs. Control veered between them at various points. If only there was a shorthand approach to describing it? Here was my solution, aided by the Melbourne Genealogical Choir… 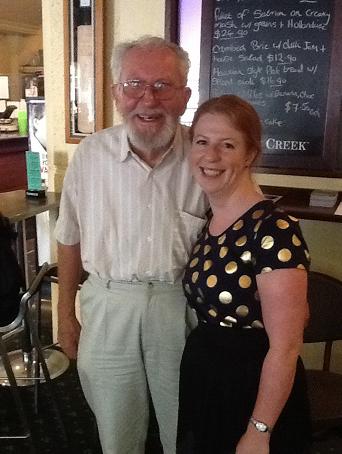 During the interval between the two talks I signed a few books (annihilating the resale value for them on ebay!) and met a couple of folk who had been former clients, and one prospective client who had contacted me just prior to departing for the cruise. His name was John Loveland, his surname coincidentally also being the maiden name of my aunt Beth in Melbourne, who had married my mum’s brother Bill many moons ago. John asked me where Beth’s family was originally from, I replied Ballarat – and we soon established that they were actually related as third cousins! (I have no idea why this keeps happening to me!). Coincidentally, I had arranged to meet Bill and my cousin Alison in the club after my talks were completed (Bill’s a member), and so I introduced them to John, and it transpired that he had met Aly’s grandfather at a family reunion in the 1980s, and knew all about her and the Melbourne branch of the family. Small world! The picture on the right shows Aly with her new found cousin John. 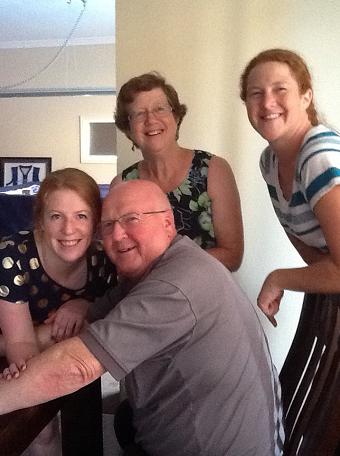 In the afternoon I visited my cousin Roslyn at Narre Warren, and her wee twins (growing up way too quickly!), along with Bill, Aly and Beth (see picture to the right), and was back to the boat for 6.30pm. At 8pm I then took part in a panel session about the future of genealogy, with Thomas MacEntee asking us some interesting questions about various trends in the field of genealogy just now, and where it might be going in the next 5 years. Also on the panel was Shauna Hicks and Mike Murray from Oz, and Kirsty Gray. It was a fair auld session, lasting until 9.20pm, at which point we wrapped.

Tomorrow I have two talks to give, including my first Irish based talk, and plenty more one to ones with delegates struggling with Irish and Scottish research problems. The next shore based session will be near Adelaide on Saturday - further details at http://www.unlockthepast.com.au/events/chris-paton-and-thomas-macentee-downunder/adelaide.

More in due course…!

Email ThisBlogThis!Share to TwitterShare to FacebookShare to Pinterest
Labels: Australia, cruises, talks, Unlock the Past