Yesterday I had the great pleasure to attend the latest stakeholders meeting at the Public Record Office of Northern Ireland (www.proni.gov.uk) in Belfast, where as usual, there is a lot happening! The following is a brief summary of the proceedings. 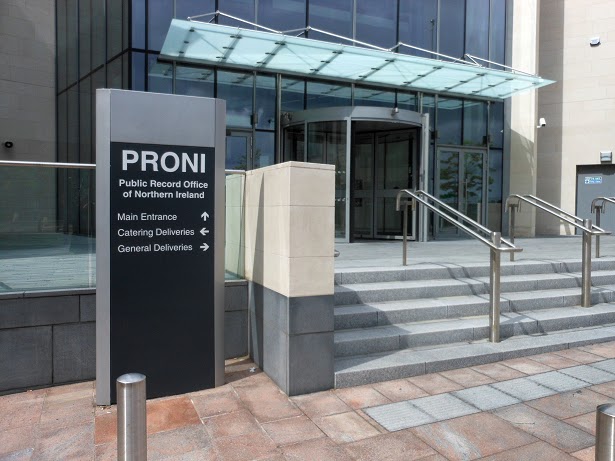 The first speaker at the forum was Joy Carey, who discussed the reprographic unit's recent project to merge some of the archive's historic streetscape and landscape photos with contemporary images of the same view. This has a similar aim to the History Pin project (www.historypin.org), but with two big differences - specially commissioned photographs of the modern scene are used, and the integration between the two is just beautiful! The project's results can be viewed at PRONI's Flickr page at https://www.flickr.com/photos/proni. Of particular note for me are the two taken from Carrickfergus, where I grew up - one depicts the North Gate at the top of North Street (https://www.flickr.com/photos/proni/16192653380/), which I regularly used to walk through to get to the train station shop, where I used to do a newspaper delivery run from, the other with a view of the castle from the harbour (https://www.flickr.com/photos/proni/16192309048/). Another wonderful effort sees two views of the Shankill Road Mission (https://www.flickr.com/photos/proni/15848166848/), and a wonderfully effective merge between an old tram and a modern bus. Only 17 images were created, the purpose behind the project being to highlight the photographic holdings of PRONI, which successfully gained a lot of press attention in Northern Ireland and beyond. It was so successful that more images will be created soon in collaboration with Strabane and District Camera Club.

The current big digitisation project still ongoing at the moment is the ED/1 National Education Commisioners Grant Aid Application forms for school across the north of Ireland. The following is th catalogue description:

In September 1831, the Commissioners of National Education were established to administer a fund of 30,000 per annum placed at the disposal of the Lord Lieutenant for the education of the poor in Ireland. They were empowered to make grants to local schools on condition that part of the required sum was raised locally and in addition they supervised the work of the schools, supplied textbooks and trained teachers. This class of records which bears the PRONI reference number ED/1, consists of 33 volumes of applications made to the Commissioners for grants for building schools, payment of teachers, provision of textbooks, equipment etc. The applications were made on printed questionnaire forms (occasionally accompanied by correspondence), which were filed and bound together in date order and arranged county by county. They cover the period 1832-1889. ED/1/1 to ED1/28, are available on microfilm and bear the reference number MIC/548, Reels 1 to 52. The National Archives in Dublin hold a few unbound applications from Counties Antrim, Armagh, Down, Fermanagh and Meath, as well as a volume of Rejected Applications from Ulster schools for the period 1868-72.

So far the records for counties Down, Fermanagh and Tyrone have been completed, and work is now ongoing with County Antrim. I recently looked at these records for Islandmagee to try to find one of my schoolteacher ancestors, and although unsuccessful (he taught just before the period in question), I can see how they will be very useful for those wishing to understand more about the creation of the National Schools movement. Elsewhere on the digitisation front, various private records have been worked on, including church records for Ballynahinch Congregation Church and a project to digitise the registers from St Anne's Cathedral in Belfast. These will not go online but will be made accessible instead within the search rooms.

On the cataloguing front, we heard from Jayne Hutchinson about the ongoing work to prepare government papers for release from 1987/88, and then more importantly on the family history front, on efforts to further catalogue the 1939 National Identity Register holdings - at present PRONI receives just 10-15 look up requests a month for these. This has been something of a nightmare collection to access, in that there are no original finding aids for the collection which follows no rhyme nor reason in the way that they have been collated (I apologised to Jayne for having made the first FOI application on these five years ago! See http://scottishancestry.blogspot.co.uk/2010/03/1939-northern-irish-foi-request.html). The good news is that these are now being catalogued by address, with all of Belfast now completed, and with just 90 of the total 751 volumes still to go. Once this has been completed, PRONI intends to make a big song and dance about them, so watch this space. I did flag up that the online news story about their access has disappeared from the PRONI news site, this is because there was a recent switch to a new news delivery platform, and it seems to have been lost in the move, but the records are accessible via a Freedom of Information request to the facility at no cost. I did also ask for clarification about the 1937 Northern Irish census, following the recent news that the 1926 census for the north no longer exists, and have had it confirmed that the 1937 census DOES still exist, but that it won't be available until 2037. This therefore means that the National Identity Register from 1939 is going to be an immensely important census substitute for some time to come - something I can certainly testify to as the record obtained from my original FOI request confirmed my grandfather's date of birth in Belgium, for which there had previously been a bit of a question mark.

Elsewhere on the cataloguing front, work continues on the Robert Hunter papers, the papers of Sean Murray who was a local Communist of note, the family papers of Dr Andrew Johnston (1929-49), Thomas Dobson's diaries at D4390 (Dobson was key in the development of a process to freeze Irish milk for worldwide export), the Londonderry papers (including photo albums from Mount Stewart under D3099), papers from the Royal Victoria Hospital, and more.

On the exhibitions front, PRONI will be hosting a Derry diaspora exhibition soon, and has also created its own First World War pop-up exhibition on various themes from the home front and women, to 1916, the Somme and the Easter Rising. This will be hosted at PRONI and then at selected venues across the countries. From June 6th an exhibition on the Connaught Rangers will also be on display at PRONI, which has previously been travelling around the country also.

Television series Who Do You Think You Are is currently preparing for a new run, and as a part of this the production company has been back to Belfast to film with well known celebrity XXXXXXX...! When they're good and ready to announce who it is, I'll update you - but it's certainly an individual I'll be interested to watch! :) Suffice to say that the filming went well, and it will be great to see PRONI given a UK wide platform on screen to show off its wares yet again.

On the talks front, a series of ten talks entitled 'Your Family Tree' will be kicking off from March 11th right through to May 13th. These will be filmed for inclusion on PRONI's YouTube channel at a later stage. A new hands on monthly training session for PRONI newbies is also proving extremely popular, offering a 2 hour session for 14 people maximum, with one hour on the facility's online offerings, and the other the searchroom (as well as orientation around the facility). Sessions for March and April are already fully booked, with more to come. (For all forthcoming talks and events, keep an eye on the PRONI website and this blog!). PRONI will also be participating again in European Heritage weekend later this year in September.

On other developments from key partners to PRONI, Libraries NI has an interesting digitisation project on the go just now, digitising the letters of library staff who went to war from 1914-1918. This will be promoted in June and the results will be accessible from the Libraries NI website (www.librariesni.org.uk). 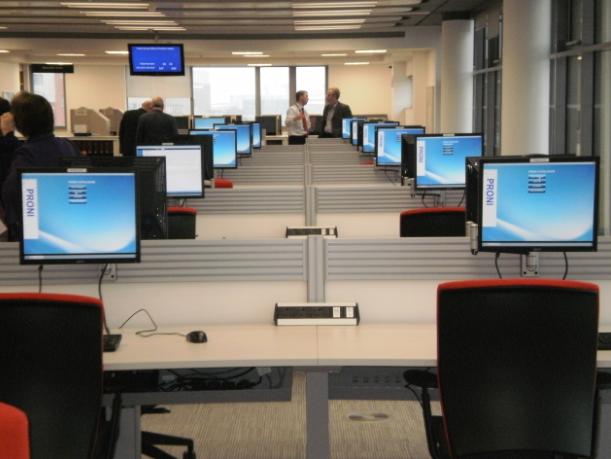 That's about it for now! As usual I was able to do a few hours client research after the meeting, before getting a quick session in at the end of the day for my own research, before getting the late ferry back to Scotland. I was able to call up five productions, including two financial accounts for the Scottish army in my home town of Carrickfergus and Islandmagee in 1643 (the brother of one of my Islandmagee ancestors was in the Scottish army and was based there), a rental roll for Islandmagee in 1819, and two other productions. I was able to obtain all of these records, scan them on the large self-service scanner, and check out of the building within the space of 20 minutes - and the scans only cost £3 in total (30p an image). THAT is how to run an archive service! (Useful tip - the self-service scanner is for USB thumb drives only, so always worth carrying one if making a visit.)

(With thanks to the staff at PRONI)

For details on my range of genealogy guide books please visit http://britishgenes.blogspot.co.uk/p/my-books.html. To commission me for genealogical research, please visit my research site at www.scotlandsgreateststory.co.uk.
Posted by Chris Paton at 17:48