An Independent People: The Story of Ulster's Presbyterians (DVD) 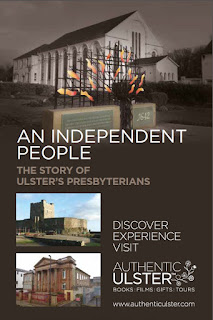 This series was originally commissioned and broadcast by BBC Northern Ireland television with support from the Ulster-Scots Broadcast Fund. The series was produced by Below the Radar TV and has received much critical acclaim. It has now been produced on DVD by Authentic Ulster.

EPISODE I: TAKING ROOT The first episode of this series traces the story of the Scottish ministers who first established the Presbyterian Church on Irish soil and their struggle for religious liberty throughout the turbulent seventeenth century.

EPISODE II: SEEDS OF LIBERTY Episode two considers the extraordinary contribution made by Ulster Presbyterians to America’s struggle for liberty and how revolution in America and France inspired radical Presbyterians in Ulster to rise up against the Crown in 1798.

EPISODE III: UNION AND DIVISION The final episode explores the ways in which Ulster’s Presbyterians began to move away from their radical past to become part of the establishment in a new Northern Ireland state and looks at the role of the Presbyterian Church in Ireland today. 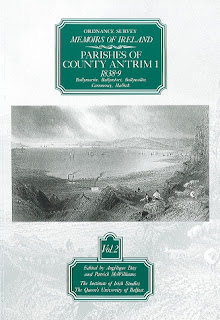 We are pleased that many of you have taken advantage of our recent special offers, including last week's sale on the Place Names of Northern Ireland collection.

To coincide with the frantic last minute shopping in the final weeks before Christmas we are now also delighted to announce that all volumes in the excellent resource that is the Ordnance Survey Memoir collection are now HALF PRICE!

If you are not aware of this series, the Ordnance Survey Memoirs provide copious background information on the character and habits of the people who lived in Ireland during the early part of the nineteenth century.

They are a unique source for the history of the northern half of Ireland before the Great Famine, as they document the landscape and situation, buildings and antiquities, land-holdings and population, employment and livelihoods of the parishes. The surveyors recorded the habits of the people, their food, drink, dress and customs. Details of ruined churches, prehistoric monuments and standing stones were also included.

The memoirs can contain individual names, particularly the volumes covering counties Antrim and Londonderry which may include, for example the names of those emigrating to American in 1833 & 1834 by townland & parish.

Other more unusual information on individuals from a parish can be obtained from the memoirs. For example, here is an extract concerning those living in the parish of Aghanloo:

‘The most remarkable person born in this parish was the father of George Berriman, who is said to have had 49 children.’

And In Tamlaghtard (or Magilligan) parish:

'James Conn and Dennis Hamson were the only remarkable characters in this parish. The former … was known to lift a pair of large cartwheels, newly shod, and raise them with one hand above his head also to break new horse shoes into pieces with his hands.’

COMMENT: The TV series noted above was a truly exceptional piece of work. Episodes one and two in particular were superb - well worth the purchase. (And by the way, the church on the DVD cover is my old church in Carrickfergus, Joymount Presbyterian - my nan, and later myself, used to live in the row of houses adjacent to it!)

As for the Ordnance Survey Memoirs - if you are unfamiliar with them, think about the Statistical Accounts of Scotland or the Victoria County Histories, and you're roughly in the same ball park!