The good folks at EDINA have announced via their blog that their essential Statistical Accounts of Scotland portal is to be redeveloped and relaunched in late summer 2016. As well as an improved infrastructure the team is also creating a new interface, and has suggested that if anyone is interested in helping to beta test the service they should get in touch. The full blog post is available at http://statacc.blogs.edina.ac.uk/2015/12/18/182/. 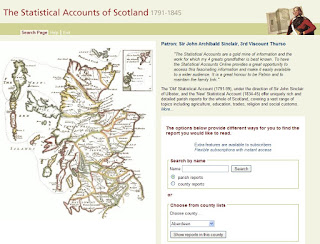 By way of a quick explanation, the Statistical Accounts are the service I suggest that everyone doing Scottish research looks at once they have had a play with the ScotlandsPeople hosted vital records and censuses, because they contain gazetteer like accounts of each Scottish parish, as drawn up by the resident Church of Scotland ministers, in the 1790s and again the 1830s/
1840s. Each account provides information on the religious make-up of each parish, topographical information, details on industry, landowners, history, and just about anything else that might give you an idea of what parish life was like at the times in question. The site is currently hosted at http://stat-acc-scot.edina.ac.uk/sas/sas.asp?action=public - well worth bookmarking for Boxing Day if you fancy a fun read!

There's a bit more on the accounts in an old blog post at http://chrispatonsblog.blogspot.co.uk/2010/11/statistical-accounts-of-scotland.html.

For details on my genealogy guide books, including my recently released Discover Irish Land Records and Down and Out in Scotland: Researching Ancestral Crisis, please visit http://britishgenes.blogspot.co.uk/p/my-books.html. My Pinterest account is at https://www.pinterest.com/chrismpaton/.
Posted by Chris Paton at 16:02