Twas the night before Christmas
And all through the house
All the genies were asking
"What d' ye mean the archives are closed?!!!!!!" 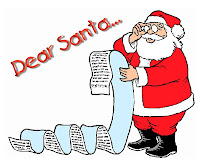 Yes, boys and girls - Santa has to visit our wonderful archivists and librarians as well. The following key archives and libraries will be closed as follows over the festive season:

George IV Bridge Building and the Maps Reading Room during the festive season:

(New Year closures not yet listed)

NB: PRONI will be closed on Thursday evenings throughout December 2015 and January 2016


For all other archives, check their website in advance of a prospective visit!

For details on my genealogy guide books, including my recently released Discover Irish Land Records and Down and Out in Scotland: Researching Ancestral Crisis, please visit http://britishgenes.blogspot.co.uk/p/my-books.html. My Pinterest account is at https://www.pinterest.com/chrismpaton/.
Posted by Chris Paton at 19:07