From the National Archives in England (www.nationalarchives.gov.uk): 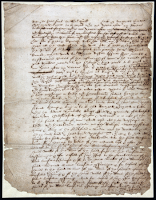 By Me William Shakespeare A Life in Writing is a unique and first time collaboration between The National Archives and King’s College London.

Presented together for the first time, these are some of the most significant documents in the world that track Shakespeare’s existence as a citizen of London, as a businessman, as a family man, servant to the King and even possibly a thief and a subversive. They explore both his domestic and professional lives, what it meant to live in the Elizabethan and Jacobean eras and the social impact of his plays. The exhibition will take place at the Inigo Rooms in Somerset House – it was at the original Somerset House where early performances of Shakespeare’s plays took place and the will was first held.

Visitors will encounter Shakespeare in his own words and in his own handwriting. They will be taken on a journey from the birth of The Globe through to Shakespeare’s dying days in Stratford-upon-Avon.

This exhibition provides a once-in-a-generation opportunity to see these key documents, including four of the six known signatures, alongside carefully selected artefacts and paintings from various institutions.

Six scenes in Shakespeare’s life are narrated through key documents and include highlights such as:

Deborah Bull, Assistant Principal, King’s College London said: ‘This unprecedented collaboration between King’s College London and The National Archives will take an entirely innovative approach to connecting audiences with Shakespeare’s life. The digital installation - juxtaposed with these historic and precious documents, preserved over four centuries – give us an opportunity to witness Shakespeare’s life in London. From personal court testimony, through Boxing Day performances for King and Queen, to the theft of a theatre - the exhibition will enable audiences to engage and identify with a man who has influenced cultures across the globe for the past 400 years.’

Professor Gordon McMullan, Director, London Shakespeare Centre at King’s College London said: ‘The documents in this extraordinary exhibition offer unique insight into Shakespeare’s life and that of his fellow actors and playwrights. They represent the core of our knowledge of his biography – his intera_ctions with officialdom, whether law cases, records of performance at court, tense examinations over potentially treasonous activity, disputes over rent, marital tensions, or the end of a life. Together, these records – which are unlikely to be on public display again in our lifetimes – give us the opportunity to reconstruct Shakespeare’s life. We in the London Shakespeare Centre at King’s are privileged to have the chance to share the curation of this wonderful exhibition with The National Archives’ experts and to be actively involved in making these priceless documents accessible to all.’


HIGHLIGHTS FROM THE KEY DOCUMENTS ON SHOW:

All documents are registered with UNESCO as part of the UK memory of the world register.

1. Removal of the Globe from Shoreditch to Bankside. Documents created in 1601-2, refers to incident in 1598-99
This document from Star Chamber - the judicial arm of the King’s Council - reveals the unusual origins of The Globe. Richard Burbage and his fellow actors, possibly including Shakespeare himself, built the Globe from materials removed from The Theatre, another playhouse on the other side of the river from The Globe. The document refers to ‘the violent theft’ of the building and reveals the origins of The Globe – the source of Shakespeare’s financial success – in this property dispute.

2. Testimony Regarding Globe Performance of Richard II and Essex Rebellion, 1601
These witness statements recount the events of the unsuccessful rebellion led by Robert Devereux, 2nd Earl of Essex against Elizabeth I and reveal how Shakespeare’s work was used in politically subversive ways. Essex was popularly associated with character Bolingbroke who leads a rebellion against a tyrannical king in an event dramatised by the play. A performance of the play was commissioned by Essex’s co-conspirators, a fact revealed in the testimonies used to convict them of treason.

3. Grant of Red Cloth to Shakespeare and Others for Participation in James I’s Coronation Procession, 1604
Listed in accounts from the coronation procession of James I and VI, this grant of four and a half yards of red cloth from the King to Shakespeare reflects his status as one of the King’s servants and the point when the playwright’s career began to flourish in a major way. This ceremony followed designation of the troop as the King’s Men a year earlier in 1603.

4. Account Listing Plays Performed at Court, 1604-05 and 1611-12
Royal accounts of the Master of Revels reveal which plays were performed at court over a particular season, including those performed over the Christmas period. These accounts, copies of which were s_ubmitted to the Exchequer, allow us to date when Shakespeare likely wrote A Comedy of Errors, Measure for Measure, The Merry Wives of Windsor, Love’s Labours Lost and Othello and show that Shakespeare’s company performed for the King more than any other company – illustrating his privileged position and success.

5. Shakespeare gives evidence in a dispute over a dowry. Documents written in 1612 but refer to events of 1604
Shakespeare provided evidence in court when his then landlord, Christopher Mountjoy, failed to provide his son-in-law, Stephen Bellott, with a dowry for his daughter’s hand. Shakespeare is likely to have played a role arranging this marriage and may have even performed the handfasting – or betrothal – of the couple. This document recording his testimony also includes his earliest recorded signature. This episode in Shakespeare’s life may have influenced the plot of Measure for Measure, the first recorded performance of which was just few weeks after the marriage of Stephen Belott and Mary Mountjoy. Themes in the play address abstinence, dowry, and marriage, all themes of this case.

6. Will and Testament of William Shakespeare, 1616
Shakespeare died on 23 April 1616. His will, signed by him in three places, is indicative of his familial and social relations. Shakespeare died a wealthy man. Evidence indicates that he revised his will as his estate changed. Just before his death, Shakespeare added personal bequests to his will including the gift of a silver bowl to his daughter, memorial rings to his actor friends in London, and
his second best bed to his wife. Shakespeare also left most of his property to his eldest daughter, although his will also indicates he hoped to establish a male legacy.

(With thanks to Emma Collins at TNA)

For details on my genealogy guide books, including my recently released Discover Irish Land Records and Down and Out in Scotland: Researching Ancestral Crisis, please visit http://britishgenes.blogspot.co.uk/p/my-books.html. My Pinterest account is at https://www.pinterest.com/chrismpaton/.
Posted by Chris Paton at 11:15