Yesterday I travelled to Belfast to attend the latest user forum meeting of the Public Records Office of Northern Ireland (www.proni.gov.uk). A lot was covered, so the following is a quick summary:

Lorraine Bourke appraised us of the latest major acquisitions to the archive, which are as follows: 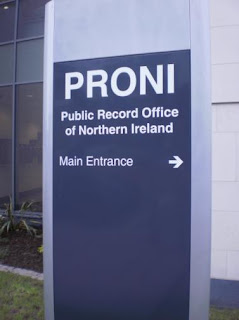 On the digitisation front, some registers have been called in to be digitised. These include baptismal and marriage registers for St. Mary's and St. Patrick's from Donegall Street (from 1798 onwards), some Methodist records, and records from Drumcree parish, with the microfilm of the register already held now almost unusable.

On the cataloguing front, records from 1898 onwards for the West Ulster farmers Union in Fermanagh are currently being worked on. An exhibition on the Londonderry Papers, which the archive has been working on for some time as a major cataloguing project, has recently taken place in Bangor Library and Holywood Library.

Hugh Campbell then updated us on some future developments on the digitisation of records. The National Education Commisioners Grant Aid Application forms for Ulster, catalogued under ED/1, are currently being digitised, and will start to go online next year, likely starting with those for County Down. PRONI is also looking to digitise the Northern Irish version of the Parliamentary record, HANSARD. 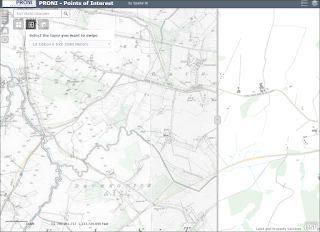 In my previous user forum report I mentioned that PRONI has a new GIS mapping system platform (see pic, right), which will host historic Ordnance Survey maps, and additional optional data layers which can be placed over the top, carrying useful info such as the locations of churches, graveyards etc. This is going to be a great resource and game changer for many folk doing ancestral research, and it is hoped that this might be online by the end of December.

There are some major changes taking place with PRONI itself now, which will unlikely be noticed by day to day users. The archive is currently a part of the Depart for Culture, Arts and Leisure, but in four months time it will be integrated into the Department of Communities, which I think is a new construct under Stormont. Before this however, there is another major change which users will notice - the PRONI website is on the move migrating to the Northern Ireland Direct (NIDirect) platform on which you can already find the GRONI website now. I asked whether this means that the URL currently under use (www.proni.gov.uk) will still be usable, or whether there will be a new URL, but this info could not be confirmed at the meeting, nor whether individual URLs for specific parts of the site will change, for example, the all important Church records guide. This content will still be accessible, that was certainly confirmed, but not whether the present URLs will be preserved, which may be of concern to folk who may have bookmarked specific areas of the site for personal use. The front page will certainly change to the site, we had a chance to see a printed page of the new design, but not to see how that works online as yet. The change to the new site may occur before Christmas or in January, so if you see the wallpaper suddenly change, this will be why! I did ask if the old site would run in parallel for a time, but was informed that it is likely to be a straightforward switch over. In answer to a question from the Ulster Historical Foundation's Gillian Hunt, it was further confirmed that this will be an instant switch over, there should be no downtime during the process.

On the forthcoming changes to fees, and new endeavours such as permission to use our own cameras, etc, this may now not happen until April, a slight delay from March. There is a lot happening on this front, so much so that we may be having an additional meeting early next year to be briefed, so I will hopefully be able to announce more on that in due course.

On events, there's a lot happening next year:

A couple of further points to note:

Finally, here's Belfast City Centre in festive mode - sorry, bit of a blurry pic! (There was a KFC shop to the right with my name on it!) 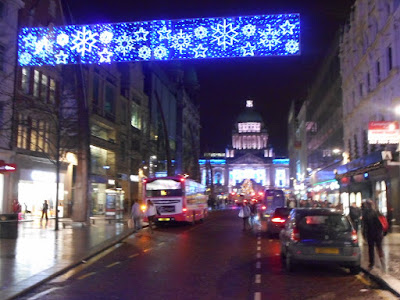 For details on my genealogy guide books, including my recently released Discover Irish Land Records and Down and Out in Scotland: Researching Ancestral Crisis, please visit http://britishgenes.blogspot.co.uk/p/my-books.html. My Pinterest account is at https://www.pinterest.com/chrismpaton/.
Posted by Chris Paton at 17:39