Ancestry (www.ancestry.co.uk) has released a special Scottish collection just in time for Hallowe'en.

About Scotland, Names of Witches, 1658

The passing of the Scottish Witchcraft Act in 1563 made witchcraft, or consulting with witches, capital crimes in Scotland. It is estimated that between three and five thousand women were publicly accused of being witches in 16th and 17th century Scotland, a much higher number than neighbouring England. Some men were also accused of witchcraft during this period, however, the number of women persecuted was far larger.

The outbreak of witch-hunting in the years 1658-1662, the period in which this list of names was created, is generally agreed to represent the high water mark of Scottish persecution.

Within this collection, you will be able to find details of the accused's name and resident town. 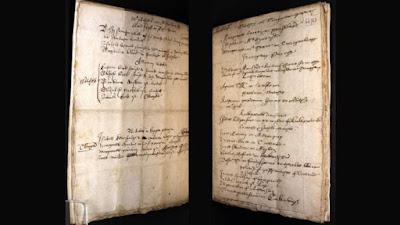 (Image: Wellcome Library)
There is a bit more on the book's release on Scottish Legal news at http://www.scottishlegal.com/2016/10/27/book-listing-those-accused-of-witchcraft-in-17th-century-scotland-digitised/

And if that isn't enough on the Scottish witchcraft front for you, don't forget to check out the University of Edinburgh's Survey of Scottish Witchcraft website at http://www.shca.ed.ac.uk/Research/witches/. This site is a database resource for the history of witchcraft and witch-hunting in Scotland, with the names of some 4000 accused witches, and references to case notes in kirk sesison records and other sources. 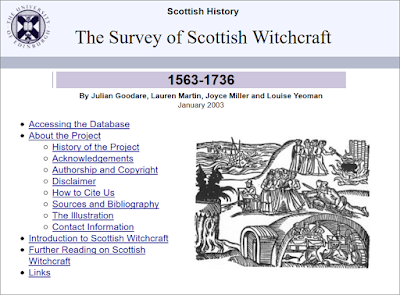 UPDATE: I've just discovered there were two witches from Largs, North Ayrshire (where I now live), listed in the book - a Margaret Jamieson and a Janet Holmes: 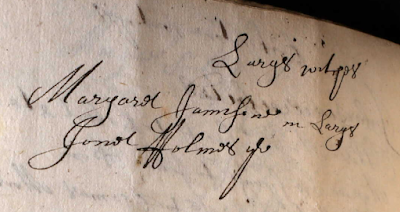 UPDATE: A wider list of Largs women accused of being witches, and years tried:

Original records on Margaret Jameson and Janet Holmes' trials are held at the National Records of Scotland in Edinburgh. Must take a look next time I am up!

For details on my genealogy guide books, including A Beginner's Guide to British and Irish Genealogy, A Decade of Irish Centenaries: Researching Ireland 1912-1923, Discover Scottish Church Records (2nd edition), Discover Irish Land Records and Down and Out in Scotland: Researching Ancestral Crisis, please visit http://britishgenes.blogspot.co.uk/p/my-books.html.
Posted by Chris Paton at 17:03