TheGenealogist launches over 220 million US records

TheGenealogist are launching over 220 million US records

We are expanding our international records with the release of:

Many people hit a brick wall where an ancestor seems to disappear from all the records in the U.K. It could be that they have gone abroad for a period or emigrated for good. If your elusive ancestor went to the United States of America, TheGenealogist’s expanded international records can help.

The U.S. Social Security Death Index is a database of over 90 million death records. These give information of those who died from 1936 whose death has been reported to the Social Security Administration.

The American census is searchable by first name, surname, age, state, county, street address and place of birth (allowing us to find Brits enumerated in the American census). The records give details of over 132 million individuals with a transcription along with the actual image of the schedule. Where available, the record is also linked to the Enumeration Index Map for the area so that you can see exactly which street your ancestor lived on. Our transcripts also have the added benefit of street addresses included, allowing you to search for a street rather than an individual.

The 1940 Census transcripts on TheGenealogist are not the same as those found elsewhere online; apart from the linked maps and street addresses, we have also audited the images discovering many that haven't been transcribed previously elsewhere. These are also being added to our records.

We believe that experienced researchers will welcome this release, knowing that having alternative transcripts to those already available gives the family historian a better chance of finding people whose names have been difficult to read or have contained errors in the other databases. 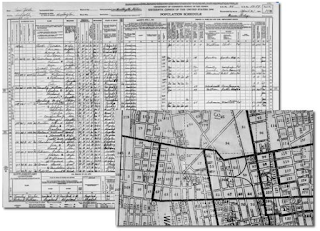 The New York Port Arrival 1846-1851 series gives the family historian access to useful information about immigrants from Ireland to the United States during the era of the Irish Potato Famine, identifying 604,596 persons who arrived in the Port of New York and giving the name of the ships on which they arrived. Approximately 70 percent of the passengers listed were natives of Ireland, with the rest being nationals of 32 countries that included Canada, Brazil, Saint Croix, Russia, Morocco, the United States and various European countries. Information contained in these records include name, age, town of last residence, destination, passenger arrival date, and codes for the passenger's gender, occupation, literacy, native country, transit status, travel compartment, passenger port of embarkation, and the identification number for the ship manifest.

For details on my genealogy guide books, including A Beginner's Guide to British and Irish Genealogy, A Decade of Irish Centenaries: Researching Ireland 1912-1923, Discover Scottish Church Records (2nd edition), Discover Irish Land Records and Down and Out in Scotland: Researching Ancestral Crisis, please visit http://britishgenes.blogspot.co.uk/p/my-books.html.
Posted by Chris Paton at 22:59