A few years back there was a great wee family tree software programme out called Heredis. It was a French innovation, and had a few unique attributes - for one thing, you could use it on a Mac, for another it had the most wonderful to use and yet at the same time the most utterly pointless 3D family tree chart - fun to play with, impossible to find your way around! And then Heredis suddenly disappeared...

Thankfully there's now a new incarnation, available for PC, Mac and all Apple devices including an iPad. This is the bit that has me quite excited, because I've just installed it on my own iPad, and I absolutely LOVE it! The product is free to download from iTunes. One of the key things about the programme is it synchronises to the programme on your Mac or PC, so that you can constantly keep it up to date - or at least it will do!  The PC version will not be available until July 4th from www.heredis.com/en/heredis-pc/, although the Mac version is already available to download at www.heredis.com/en/heredis-mac/. 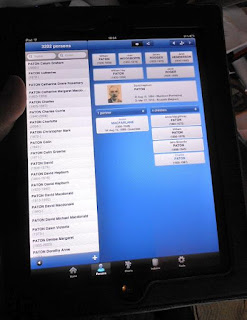 There's no 3D tree function (and in fact the tree functions for the iPad are quite limited), but my Gedcom has over 3000 individuals and loaded instantly when I opened it from my Dropbox folder. There is no dedicated import function on Heredis itself on the tablet version, I assume because you are meant to work on your tree on your Mac or PC and then just synchronize to your tablet. However, the Gedcom I exported from Family Historian through Dropbox has worked very well, although I will obviously need to reload it once I have downloaded the Heredis PC package in a few days, if I wish to synchronise future additions.

One key thing very few people mention though - it looks beautiful. To me, the aesthetic feel of a programme is as important as the tools it carries, as you will be looking at it for a long time to come. It's a gorgeous deep blue, and may very well have been designed for the Scots - love it!

If you have a tablet, have a play - there are very few family tree programmes available for iPads as yet, and this one's a cracker.

UPDATE: Here's some blurb from the site:

I don't think I've come across a programme before that allows you to record homosexual unions - if so, this is definitely a product fit for the 21st century...

UPDATE: I've had an enquiry from a reader unable to load a Gedcom via Dropbox into the programme on the iPad. Here's how I did it...

Check out my Scotland's Greatest Story research service www.ScotlandsGreatestStory.co.uk
New book: It's Perthshire 1866 - there's been a murder... www.thehistorypress.co.uk/products/The-Mount-Stewart-Murder.aspx (from June 12th 2012)
Posted by Chris Paton at 19:16