My recent blog posts on Ancestry's release of Irish parish registers has brought a response from reader Stuart McGee. He contacted the National Library of Ireland (www.nli.ie) in May of last year to ask what had become of its tender, announced in October 2010, to digitise the Roman Catholic parish registers for Ireland held on microfilm at the institution, with the intention to make them available online. The tender is accessible here, with sample images and an 18 page tender brief outlining what was required of the successful applicant. In this document the library described the collection as follows:

There are 520 reels of 35mm microfilm that represent the parish records from approximately 1,200 Parishes and some 24 Dioceses.

The original 35mm negatives are available and will be used to generate a clean positive format surrogate for digitisation purposes. The standard of original microfilming was variable as it was mainly done in the 1950-70’s.

Each film will be a 35mm positive microfilm. The case will be marked with the unique microfilm number – the P number e.g. P9156. A given reel may contain several registers. There is a lead in sheet/frame separating registers within a reel. The lead in sheet identifies the Diocese, Parish, Dates Range(s), and Events (e.g. Baptisms & Marriages) for the register which follows it. 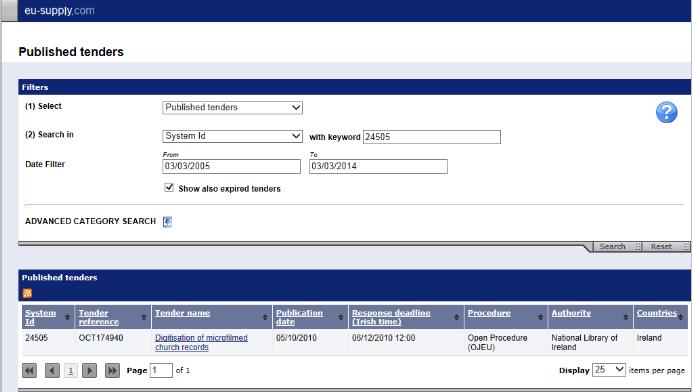 There were/are no preferred suppliers. It was with regret that we had to cancel the competition.

The decision was due to insufficient resources in the National Library of Ireland, with which to manage/coordinate the projects envisaged.

At present there are no plans to resurrect the project.

Over three years on, perhaps it is time to try again? Before big scary Ancestry decides to move in further anyway... (see http://britishgenes.blogspot.co.uk/2014/03/armageddon-ancestry-and-ireland.html).

(With thanks to Stuart McGee)

Time to find your inner Irish...! All the best online Irish genealogy resources can be found through my book Tracing Your Irish Family History on the Internet - in print and ebook formats. "Very useful, makes me wish I was Irish!" - Saint Patrick, patron saint.
Posted by Chris Paton at 10:33