The Public Records Office of Northern Ireland (www.proni.gov.uk) is hosting a book launch on September 9th to publicise the publication of the first three volumes of the 1641 Depositions by the Irish Manuscripts Commission Ltd. The speaker is Professor Raymond Gillespie of NUI Maynooth. Full details are available at http://www.proni.gov.uk/index/exhibitions_talks_and_events/talks_and_events/1641_depositions.htm. 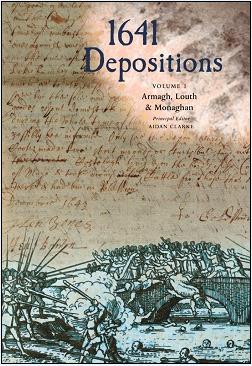 The 1641 Depositions record the atrocities that were carried out in Ireland during the rebellion of that year by the Irish Catholic population against English and Scottish colonists. There are some 8000 depositions, some recorded shortly after the atrocities of 1641, and others a decade later during a further investigation during the Cromwellian occupation.

The original records have been available in a digitised format for some time on a dedicated website from Trinity College Dublin, located at http://1641.tcd.ie. Until recently, however, this was an early Irish collection for which I thought I would likely never have a use, it seemingly being virtually impossible to connect with family that far back - assuming anyone might be recorded or mentioned in them in the first place. However, with recent developments in online access of Irish records, and through subsequent research at PRONI, I have actually made some extraordinary progress on various lines, including several based in the County Antrim peninsula of Islandmagee - and as such, I have finally established a connection with this period.

I recently uncovered the fact that one line of my family, the Browns of Islandmagee, can trace its origins back to a Robert Brown of the townland of Ballypriorbeg, one of two brothers who arrived from Scotland in the early 1600s (the other is believed to have settled in Carnmoney). Robert had three sons, Hugh, James and Robert, who settled in three separate townlands on Islandmagee. Whilst the 1641 depositions mainly record Protestant witness statements about the horrors of late 1641, they do also record Catholic witness statements about some of the reprisals. One of the most well known stories of the time on this front was the slaughter of members of the Catholic Magee family, for whom Islandmagee was named. Propaganda at the time claimed some 3000 members of the family were driven over a cliff called the Gobbins at Islandmagee, but the truth was that some 50-70 members of the family were murdered in their houses on the peninsula by the Scots, and by troops at nearby Carrickfergus. When some of the Magees fled to seek shelter from the garrison at Carrickfergus Castle, they too were murdered in the town. Well it turns out that my lot were up to their eyes in it with the reprisal - both Robert senior and James Brown were arrested for having apparently been involved in the murder of one of the families in Islandmagee and in the subsequent incident at Carrick.

It's not a glorious story, but the records themselves are incredibly detailed, not only confirming the relationships between all the Browns on Islandmagee at the time, but in providing an image of life in the area in the 1640s and 1650s. The 1641 Depositions are a fascinating record of the time, with the published versions being launched soon, the first three volumes of a planned twelve, almost certain to provide an even greater academic commentary and context to that already available online.

(With thanks to Gavin McMahon at PRONI)

Now available for UK research is the new second edition of the best selling Tracing Your Family History on the Internet: A Guide for Family Historians, whilst my new book British and Irish Newspapers is also now out. And FindmyPast - please reinstate the original Scottish census citations on your new site.
Posted by Chris Paton at 15:40