National Records of Scotland needs to up its game

This morning I set off to Edinburgh to achieve two things at the National Records of Scotland (www.nas.gov.uk). The first was to spend a couple of hours carrying out some research for a client. The second was to spend the rest of my time there doing some personal research - with so much happening on the Irish side of my family tree in the last year or so, my Scottish side has been somewhat neglected.

The original plan was to visit last Thursday, but an irritating cold prevented me from making the trip. In preparing for the journey (which is a 5 hour round trip to make from Largs), I had initially consulted the NRS catalogue a week ago, only to find it wasn't working. When I called the NRS, I was told it was offline and in need of a new part, but that it would be fixed within a couple of days. In fact, it was back up again a day later - great stuff. The documents I needed, however, were stored not at New Register House, but in an offsite storage facility on the other side of Edinburgh, and needed to be ordered in advance of my visit. When I had called to ask about the catalogue I was also advised that there had recently been problems with the online ordering system, so I was advised to call back through with any documents references I needed to order in advance, rather than do it online. A quirk of the ordering system is that you can only order up twelve items in advance. For my client's research - the priority - I had to order up ten items, leaving only two slots for me to order documents that might be of use for my own research - any more than that, and the "computer says no". I duly ordered twelve items then, expecting to view them all last Thursday, but of course, that had to be rearranged for today. Helpfully, the NRS staff member held the documents over for me, rather than returning them to Thomas Thomson House, the offsite storage facility.

The material I ordered for my client research thankfully came through, and I was able to successfully resolve an interesting situation using ultimus haeres records (a future blog post!). Another brief look up for a second client took just a few minutes, and then at about 11.30am, I had almost five hours left to play with two series of rental rolls I had ordered - except, when I got the two boxes ordered, it transpired one of them was the wrong box, the archivist having accidentally ordered the wrong accession number, which was out by a single digit. It was an unfortunate error, but I spoke to the archivist and joked it was just their attempts to get me back up on another day. These things happen, and although frustrating I laughed it off and got to work on the other box, which had a series of rentals from the 16th to the 18th centuries from a barony in Perthshire - enough for me to wade through and to keep me occupied for another hour and a half. And then at 1.00pm, I finished - with still three and half hours precious research time available to carry out work. So far, so good, and at this point, I was still a happy bunny.

Now you have to appreciate that I have been researching my Scottish ancestry for some 14 years, and that on most lines I am at least back to the mid 18th century and earlier. So I am not looking for the basics now when I go to the NRS, such as wills, censuses, parish records etc - I do keep going back to them, of course, but only as a result now from other finds made in other less accessible sources. The records that will push me back further are the things like rental rolls, court records and other more obscure, and largely unindexed collections - the fun records written in Klingon (secretary hand, in Scots) that make your hands go filthy black just by opening them. So with three and half hours to go, I took a quick look at my website on which I have recorded all my progress made so far, and decided to try and order up some records for certain situations that have long been awaiting answers.

And here then, was the problem. In consulting the catalogue, nothing I wanted to see was available. Estate papers I was interested in - stored off site. Sheriff court records of interest - stored off site. Exchequer records for certain escheated estates after the Jacobite rebellions - stored off site. At one point I took a quick look at a volume for the indexes to the Services of Heirs (records concerning inheritance of heritable property) that I have regularly consulted in General Register House in the past - the indexes of interest were there, but when I went to order the original volume, I couldn't believe it - they are now also stored off site.

After an hour of trying to come up with options to help me fill my remaining time, not a single thing I wished to consult could be ordered - everything of any possible interest was stored off site. Even if I had prepared a list of what I wanted to see before turning up today, I would not have been able to view anything - the stuff I'm interested in is stored off site, and I can only order 12 items at a time - a day in advance. Unlike the National Library of Scotland, which ferries records from its off site facility during the day, NRS does not do that. In the past, NRS had a second search room facility operational at West Register House, on the other end of Princes Street, which used to hold all the sheriff court records and other useful materials, but it was closed a few years back. When it was shut, a lot of material went to Thomas Thomson House - stored off site - and only some records made it to the main search room at General Register House.

Thoroughly irritated now, I resorted to my usual default - I decided to have a look (again) at the sasines database to pass time, to see if I had missed anything from previous searches - it's called the RAC Search Tool, and was designed by computer programmers in 55BC, not long before the birth of baby Jesus - but when I tried to perform a search it would not work. I called the archivist on duty over who told me that it was apparently working, but that "since the computers had been upgraded you can no longer see progress being indicated". So, assured it actually was working, I watched a screen do literally nothing for several minutes, before deciding that enough was enough - at which point I asked for my readers ticket back, and left, thoroughly pissed off.

Quite frankly, I am beginning to lose the rag with the National Records of Scotland. The staff are by and large helpful and friendly (as with your barber, never argue with your archivist!), but the system and the set up in operation there just does not work. It is antiquated, not fit for purpose, and if it was not for the fact that there are some computers in the Historic Search Room, I would call it jurassic (or at least 19th century). By contrast, I regularly use PRONI in Belfast (www.proni.gov.uk), and have on several occasions in recent years travelled to London to use the National Archives based at Kew (www.nationalarchives.gov.uk). Both institutions - one serving a population much, much bigger than NRS, the other a population a third the size of Scotland's - have purpose built facilities with their collections stored on site, with many innovations, a willingness to engage with their user base and to understand their needs.

I attended an archive conference in Dundee in April 2013, and gave a talk to a room filled with archivists about how professional genealogists, and those doing genealogy for a hobby, use archives to further their work. I discussed some of the great innovations that many archives in Scotland and across the British Isles have been adopting to move with the times, ranging from social media engagement with the user base and initiatives such as talks programmes, user forums, purpose built facilities, digitisation and online access to records (with commercial partnerships etc), wifi access at search rooms, and so, so much more. On just about every one of the criteria I mentioned, NRS fell flat on its face. Fifteen months later, it is still flat on its face. And that is a real tragedy - because it was here in Scotland that we basically kick started the online genealogy provision of records in the UK. ScotlandsPeople, and its precessor, Scots Origins, were ground-breaking upon creation, as indeed was the ScotlandsPeople Centre, itself a modern face to the previous access available at the GRO search room in Edinburgh's New Register House.

But in the newly merged National Records of Scotland - a body in which the General Register Office and the National Archives of Scotland still maintain separate websites years after the event (as if each is standing permanently startled on either side of a room after a shotgun wedding in which they suddenly found themselves as the protagonists), there is certainly no sense of energy at least on the archive side, no sense of willingness to move ahead with the times. ScotlandsPeople is moving slowly, but it is moving forwards. By contrast, with each visit I make to the Historical Search Room, I get the feeling that the opposite is happening - things are going backwards. And it is just not on in the 21st century.

Quite frankly, we need a new national archive facility in Scotland. It will be heresy to some, but I'd be quite happy to see General Register House knocked down to build something more adequate. But it isn't just the building. We need a new facility, new practices, new opening hours and a new attitude with the powers that be to help us to access our personal heritage. Wooden panelled walls in a search room with a wooden panelled bureaucracy just will not cut it any more in today's day and age.

In a separate post tomorrow I will compare and contrast the provisions for genealogists of the three national archives in the UK at present, located at Belfast, Kew and Edinburgh. (UPDATE: Now accessible at http://britishgenes.blogspot.co.uk/2014/07/comparing-uks-three-national-archives.html) 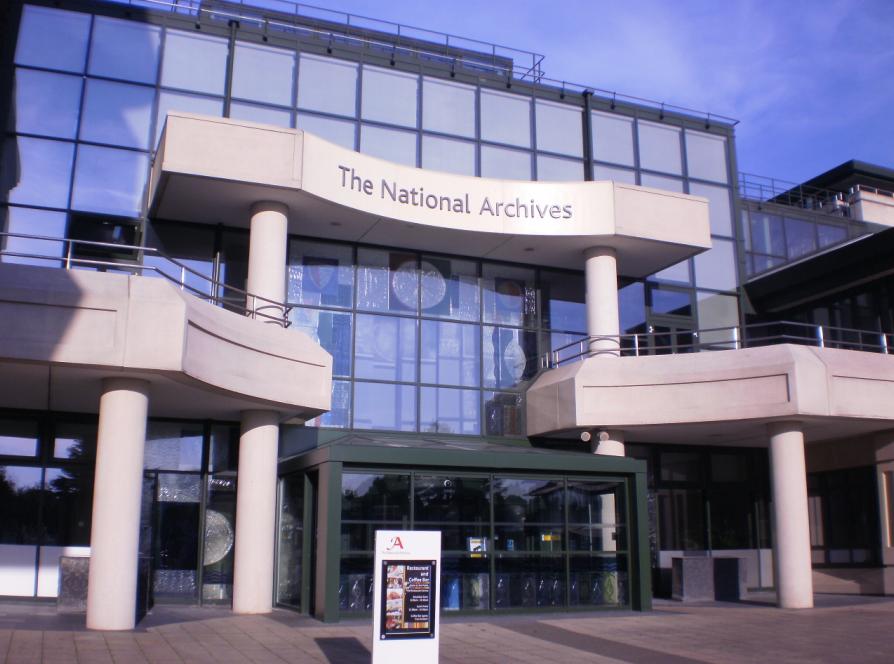 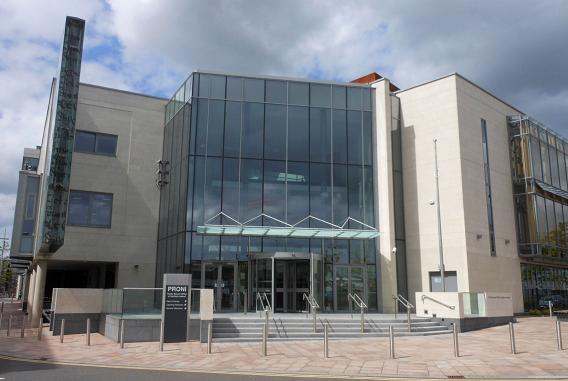 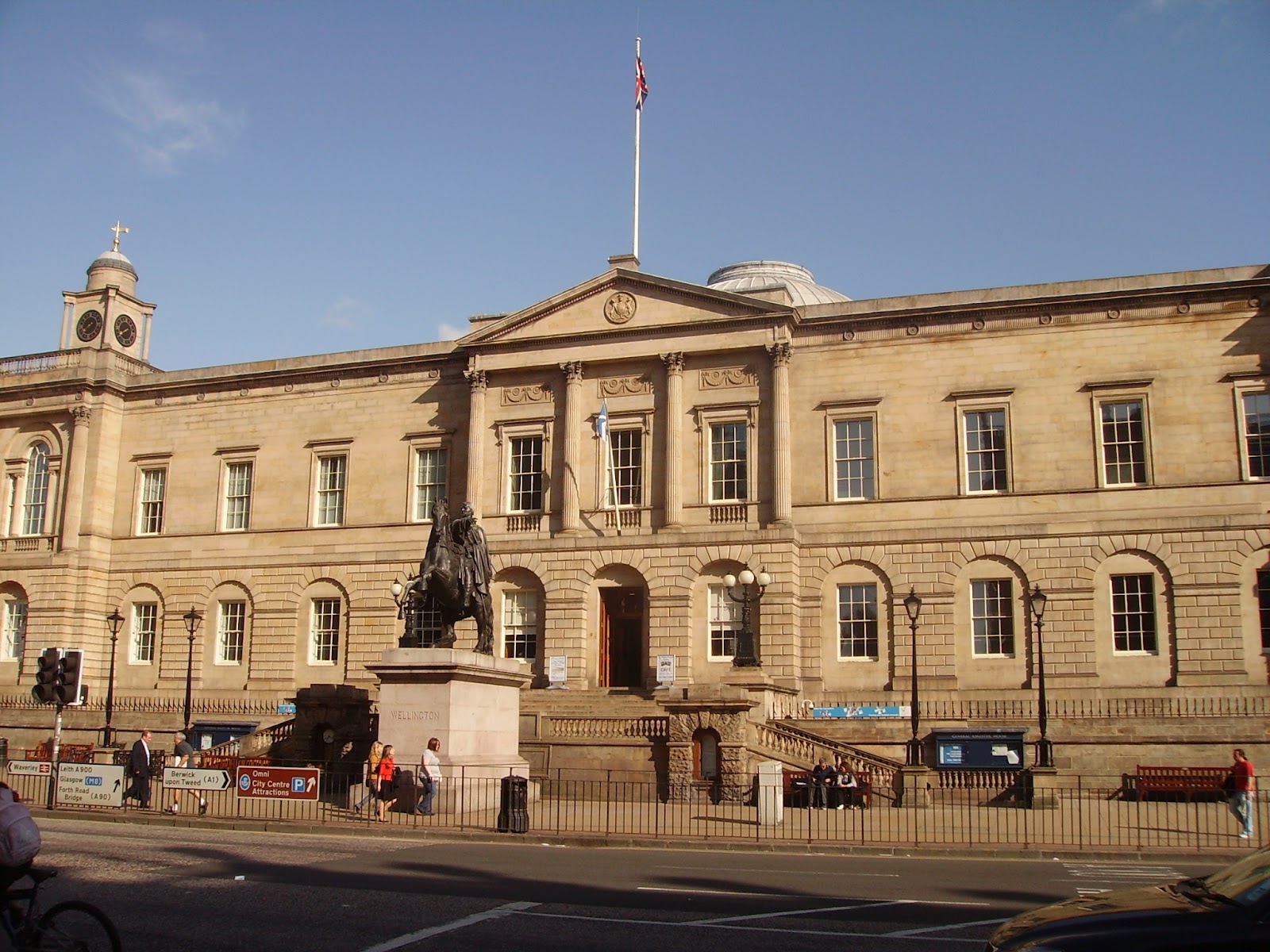 NRS. And the Duke of Wellington.

Now available for UK research is the new second edition of the best selling Tracing Your Family History on the Internet: A Guide for Family Historians, whilst my new book British and Irish Newspapers is also now out. And FindmyPast - please reinstate the original Scottish census citations on your new site.
Posted by Chris Paton at 19:02