Who Do You Think You Are? Live (www.whodoyouthinkyouarelive.com) is coming to Glasgow from August 29th-31st 2014, the first time that the show has left London since it was first established in 2006. Having been based in London for so long, it's quite possibly a show that many British GENES readers in Scotland, Northern Ireland and the north of England might have yet to visit - so what's the big deal?

The London based Who Do You Think You Are? Live event has been the world's largest family history event since its creation. Although branded around the television series of the same name, for most visitors at the event it is a chance to get some ideas of how to start their family history research, to get help with brick wall problems for those already under way, to meet some of the main genealogy records vendors, to engage with relevant family history societies for research and to attend a packed talks programme with some of the most knowledgeable speakers in their respective fields. To date I have attended all bar the very first event in London, and it it is because it is such a unique event that I repeatedly make the trip down south each year. Next month, however, I'm just down the road from the event, which will be held at the SECC in Glasgow!

To gain an idea of what to expect, my report from the London show this year in February is available at http://britishgenes.blogspot.co.uk/search/label/wdytyalive - and here's the video the organisers used to explain what to expect to those attending that event:


The SECC venue is a little smaller than the above, but the Who Do You Think You Are brand, combined with the forthcoming new series (I have a possible start date, but sworn to secrecy just now!), should make this an equally exciting event. I'll certainly be there, giving some talks, taking part in some panels and helping on a stall, but more on that in due course...

The organisers have kindly given me a unique code for British GENES readers to get discounted tickets - here's the deal:

We have a special offer: you can get two tickets for just £24 by quoting CP24* when booking on www.whodoyouthinkyouarelive.co.uk or by phoning 0844 873 7330.

Keep an eye out for some more news soon on the show - and on the new series itself!

And if you're desperate for some advice sooner than that, leave me a question for a live web chat on Who Do You Think You Are magazine's forum this Friday, from 1pm-2pm - see http://britishgenes.blogspot.co.uk/2014/07/who-do-you-think-you-are-magazine-web.html

(With thanks to Mark Mulcahy and Sarah Williams) 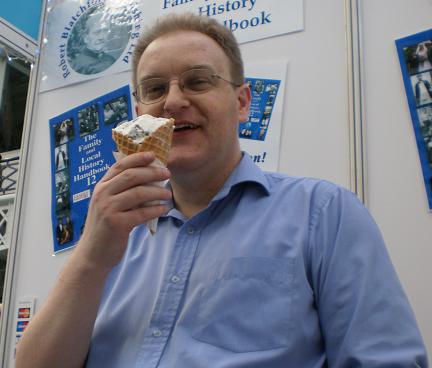 Now available for UK research is the new second edition of the best selling Tracing Your Family History on the Internet: A Guide for Family Historians, whilst my new book British and Irish Newspapers is also now out. And FindmyPast - please reinstate the original Scottish census citations on your new site.
Posted by Chris Paton at 17:40