This year's Who Do You Think You Are? Live provided a welcome evolution for a show which, bar a brief foray to Glasgow last year, has been confined to London ever since its inception many years ago. So how did it fare in its new home at Birmingham? 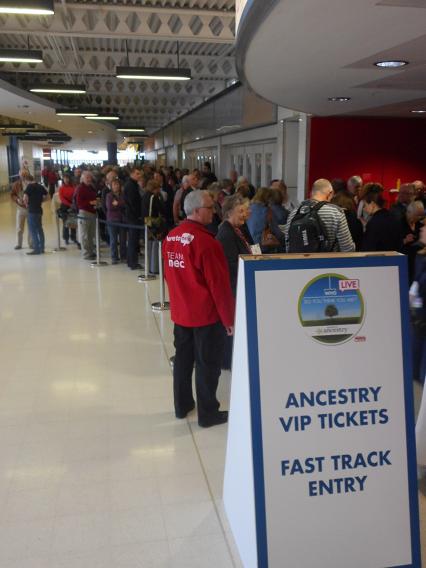 My normal routine for London is to travel down on an overnight bus from Glasgow before the show, and to then travel back on an overnight train on the return journey (for a little added luxury). With the disruption this causes for the three days away, plus the two travel days, it usually takes a significant chunk of a week from my normal activities. Locating the show at the Birmingham NEC was therefore an act of genius as far as I am concerned - I booked a flight from Glasgow which takes just an hour, and almost literally stepped off the plane at Birmingham and into the show (after a short 90 second transit shuttle in between). Similarly on Saturday, I left at 3.30pm and was home in Largs just three hours later. I have never had a more relaxing journey to an event and back again!

So travel wise, a big thumbs up. But what about the new venue? One of the advantages with the NEC is that the floor space was so much bigger, meaning that each of the vendors and societies were not huddled together like sardines. My impression was that the numbers attending seemed to be about the same as last year's event, but that it did not seem so congested. Such congestion always made it seem so much more frantic and stressful in the past, and its absence was welcome. The queues outside the venue each morning were impressive, and there were periods on the Thursday and Friday in particular when we were run off our feet. On the Saturday it was my impression that maybe the societies' stands were busier than those of the larger corporate vendors, but I have no idea if that was in fact the case, they just seemed busier to me!

This year I helped for the most part on the Unlock the Past Cruises (www.unlockthepastcruises.com) with Alan Phillips, and helped to promote the genealogy cruises and also the separate book range from the parent company Unlock the Past (www.unlockthepast.com.au), also available as ebooks on www.gen-ebooks.com. The range of books, including my various Scottish, Irish and British titles, is now also published in England by Yorkshire based My History (www.my-history.co.uk/acatalog/Unlock-the-Past-Booklets.html), who were merrily selling copies on our behalf. 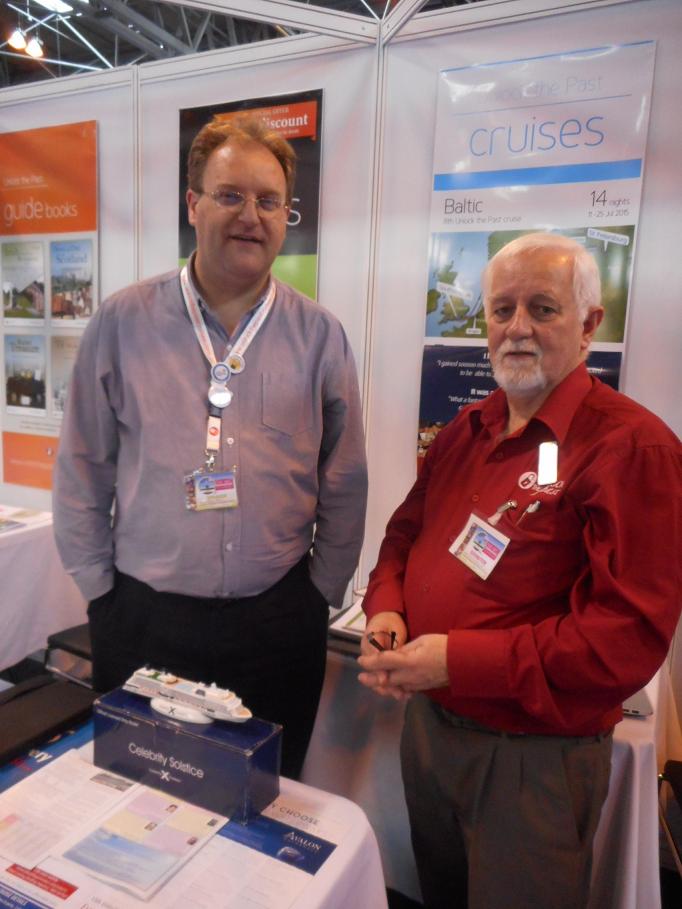 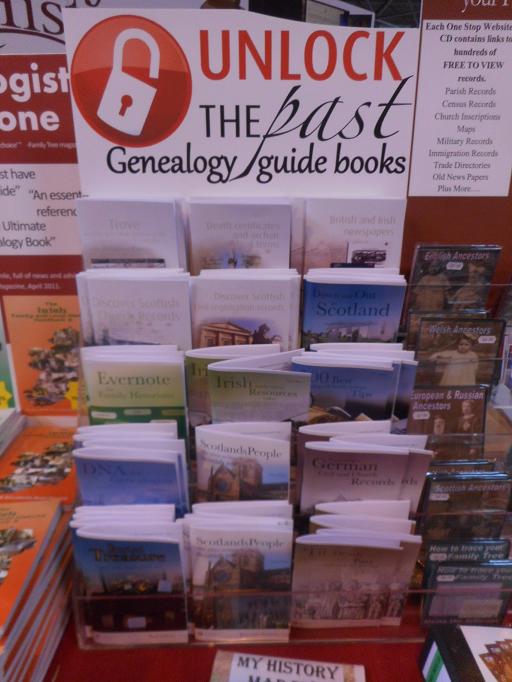 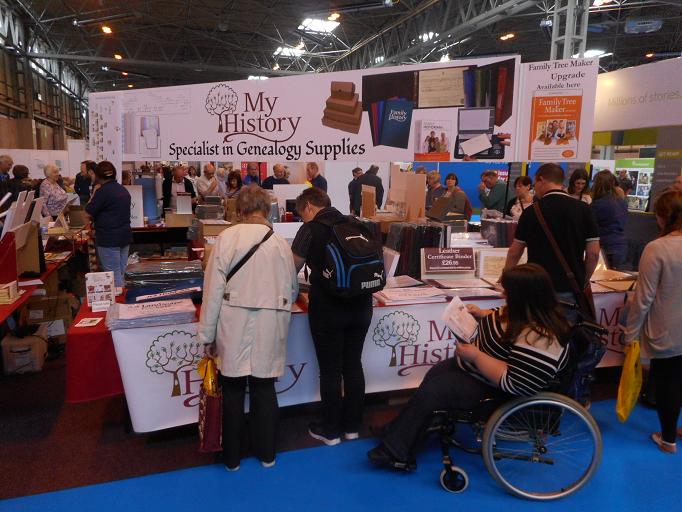 In addition to the UTP stand, I also did two stints within the Society of Genealogists' Ask the Experts area, at an hour and two hours respectively on Friday and Saturday. Although I am based within Scotland and predominantly work within Scottish genealogy, I do also do some Irish research, but bizarrely I only had one Scottish query at the event, and eight Irish situations to deal with - though I was able to handle them all easily enough! One in particular was a real eye opener for the couple involved, concerning an ancestor of theirs who had been adopted. This had been a brick wall for some time, but they actually had the adoptive mother's name on a birth certificate, and I was soon able to locate a potentially significant target family for them in Ireland to which she seemed to be related, and therefore a whole new line of enquiry to pursue. 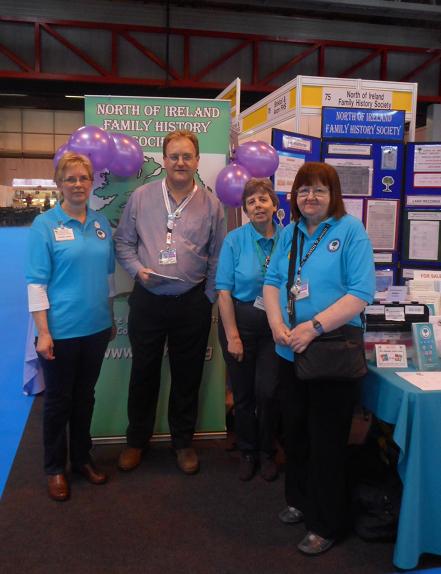 In terms of news developments, The Genealogist (www.thegenealogist.co.uk) launched an extension to their English and Welsh tithes records and tithes maps collections, and I managed to grab an audio interview with Mark Bayley on that, for the next podcast. I had fantastic conversations with Fiona Fitzsimmons and Brian Donovan from Eneclann (www.eneclann.ie) and Findmypast Ireland, and they have all sorts of goodies that they are currently working, not least of which a collection of Quaker records for the Republic of Ireland, and workhouse records from Dublin. Brian also hinted that something wicked this way comes later this year, but was keeping schtum on that for now! A new revamped website platform is also on the cards in the near future. Staying with Ireland, the wonderful folk from the North of Ireland Family History Society (www.nifhs.org) were there again in force, and promoting their latest research guide publication on County Tyrone, which I will review separately in due course. I also renewed my membership! The society's Ann Robinson also explained that they are planning to give their website a refresher in the near future - an interview with Ann will also appear on my next British GENES podcast.

There was a depressing absence of Scottish vendors or societies there, with only the two universities, Strathclyde and Dundee and ASGRA in attendance, as well as many members from the Scottish Genealogy Network (www.scottishgenealogynetwork.co.uk). Towards the end of the event I caught up briefly with Strathclyde's heid yin Tahitia McCabe, and recorded a discussion with her about the forthcoming summer institute in Glasgow that she is planning - again, keep an ear out for that on the next podcast, coming very soon! The fact that ScotlandsPeople and the National Records of Scotland were not there was simply extraordinary - but in the latter case I suspect not a lot would have been achieved by their presence anyway, with their online catalogue facilities now offline for over three weeks, which is frankly now becoming farcical. I did catch up with Miriam Silverman from Ancestry (www.ancestry.co.uk), however, who acquires content for the platform, and she revealed that there are plans to place some new material for Glasgow and Edinburgh online in the very near future, though I'll hold off mentioning any further specific details on that until I get the go ahead! Ancestry was also merrily plugging away its new AncestryDNA test, which is also soon to be launched in Australia. I briefly caught up with Bryony Partridge from the company, and thanked her for the test that she sent to me a few weeks past, which I have still to do, and will post a review on that when I do - honest! 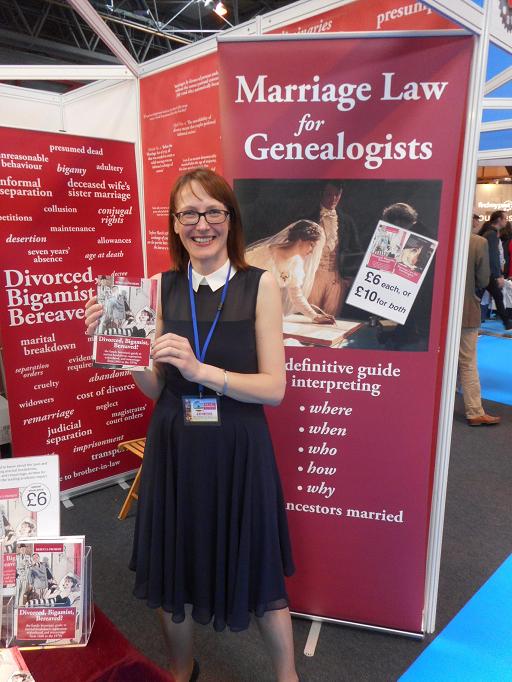 It was good to see the English based National Archives (www.nationalarchives.gov.uk) back now in force, not only providing lectures but also an advice area once again, which was busy throughout, and Rebecca Probert, who I met in Portugal just a few weeks back, was also at the event, publicising her new book Divorced, Bigamist, Bereaved?. Deceased Online (www.deceasedonline.com) launched records for the Sandwell area, and I briefly caught up with genealogist Emma Jolly, who blogs for the company, and got to meet her kids and hubby for the first time!

This year I did not submit any proposals for any talks, and I never managed to attend any talks, although as the UTP stand was beside the SoG 4 theatre I did manage to eavesdrop in on a few! Overall, I would say that the show was a much better event for being held in Birmingham, with many fantastic benefits at the NEC such as the presence of so many restaurants and cafes on site.

The only criticisms I really heard from folk were some issues surrounding parking. The show will be at Birmingham again next year from April 7th-9th - it has been changed from April 28th-30th - and it looks like it may be there for a few years yet, one of the reasons for the date change. Personally, that decision gets the thumbs up from me also - Birmingham NEC is simply the most fantastic conference venue I've ever attended yet in the UK. 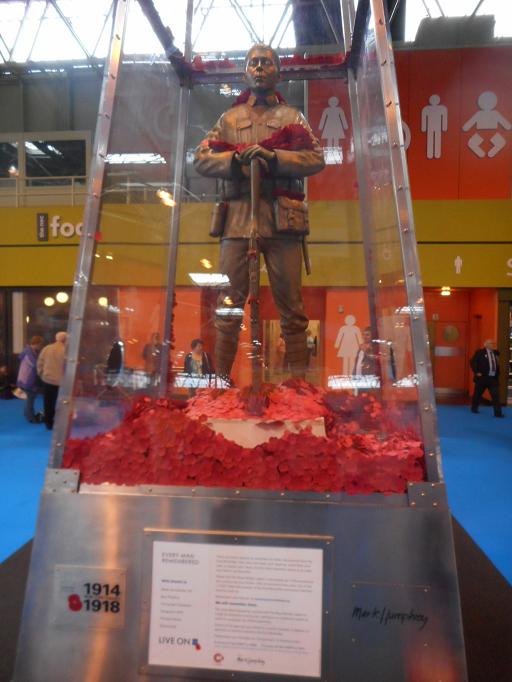 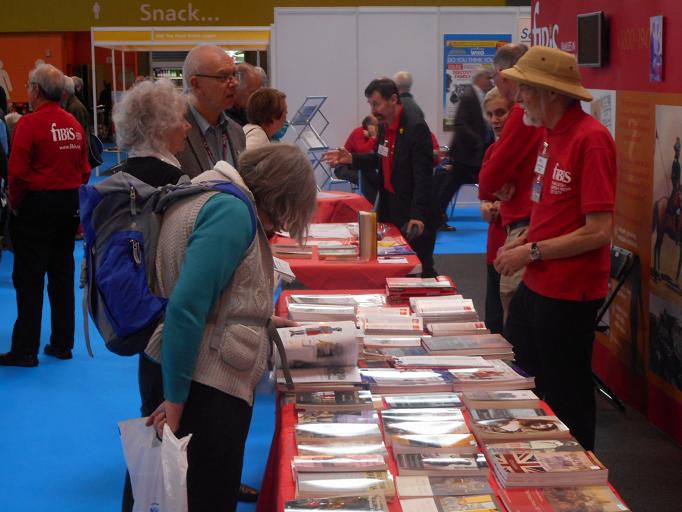 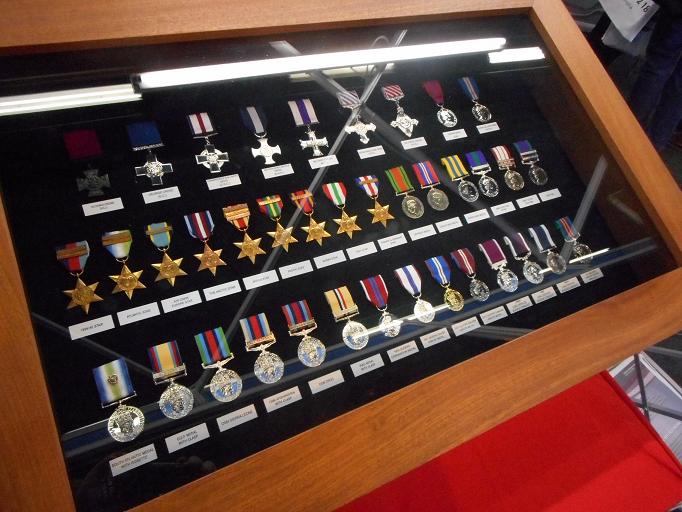 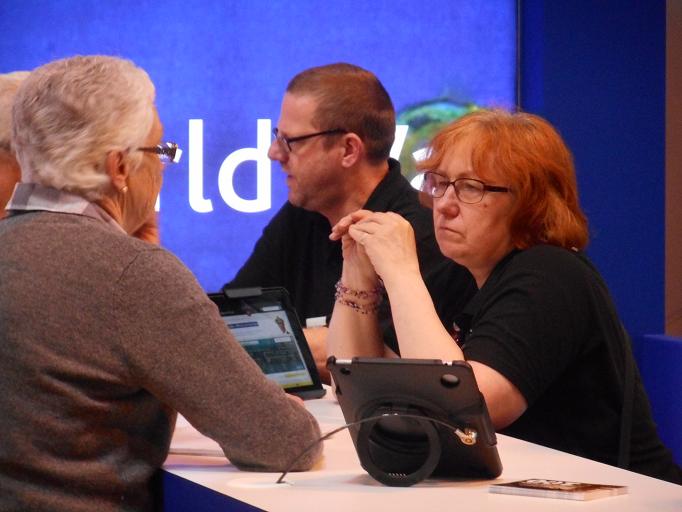 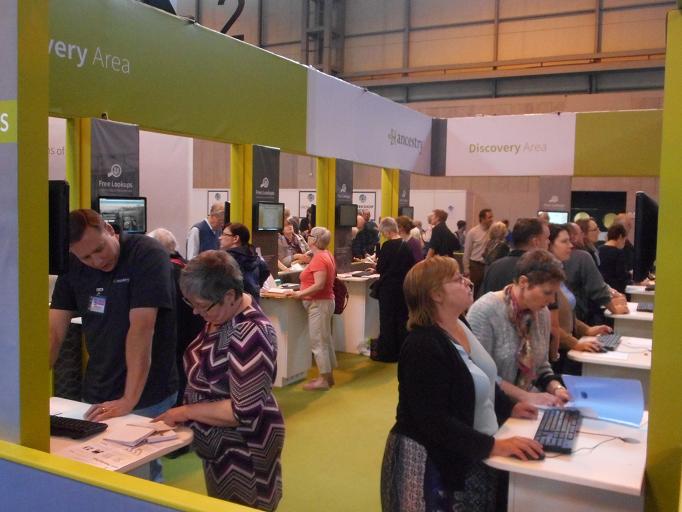 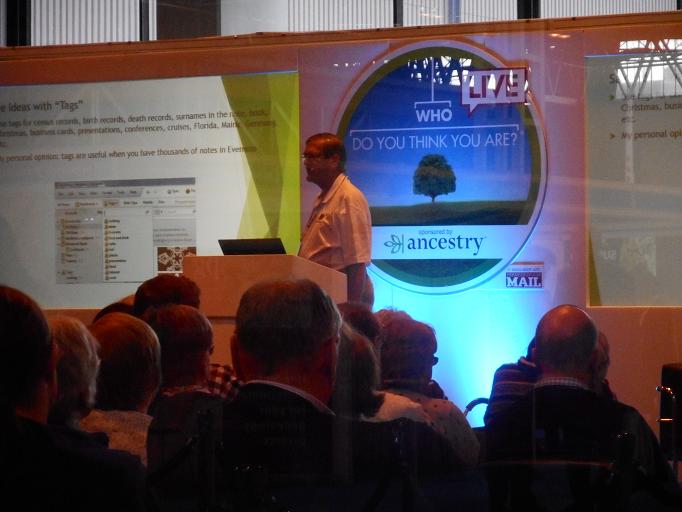 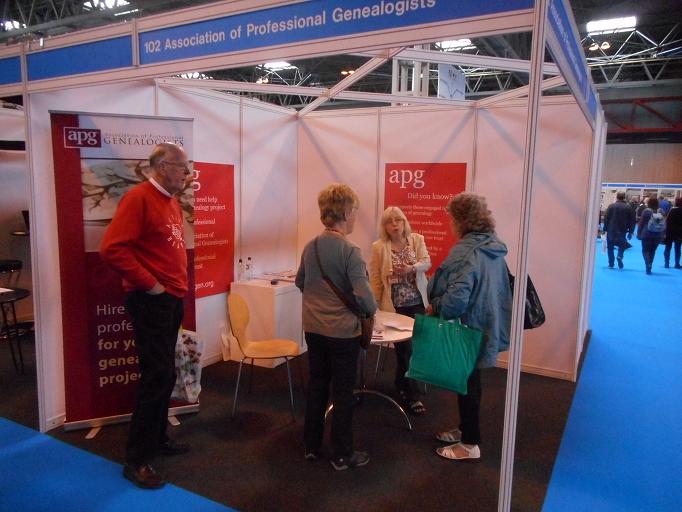 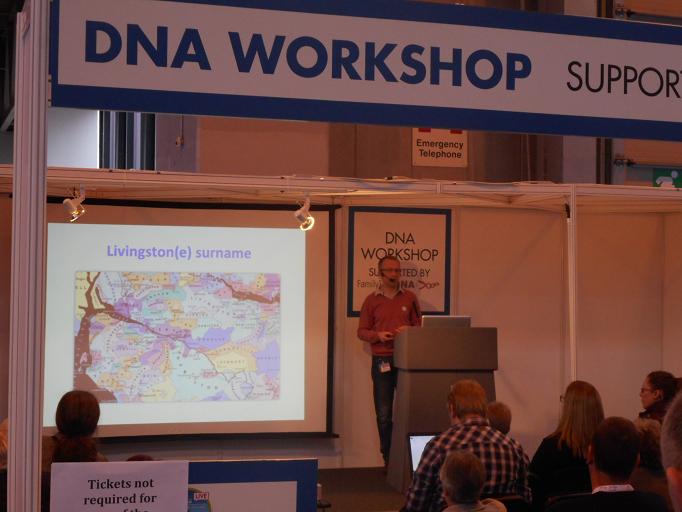 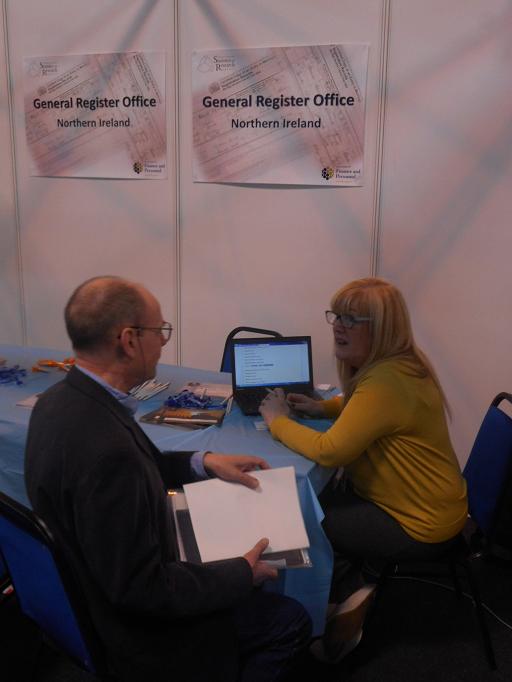 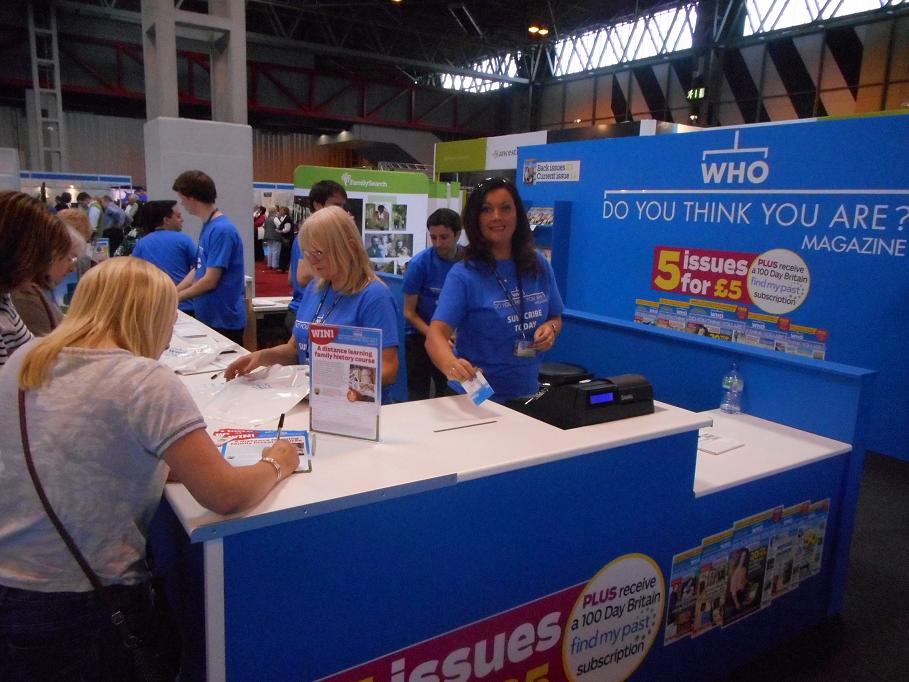 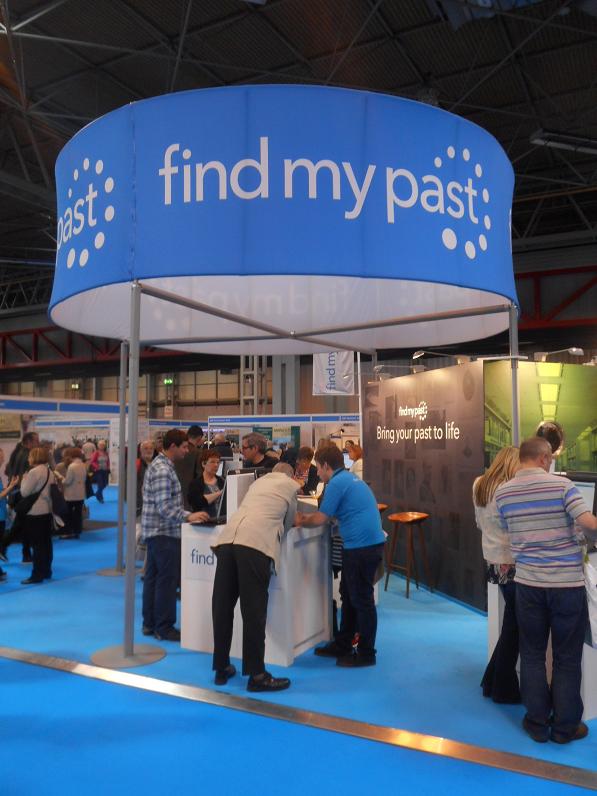 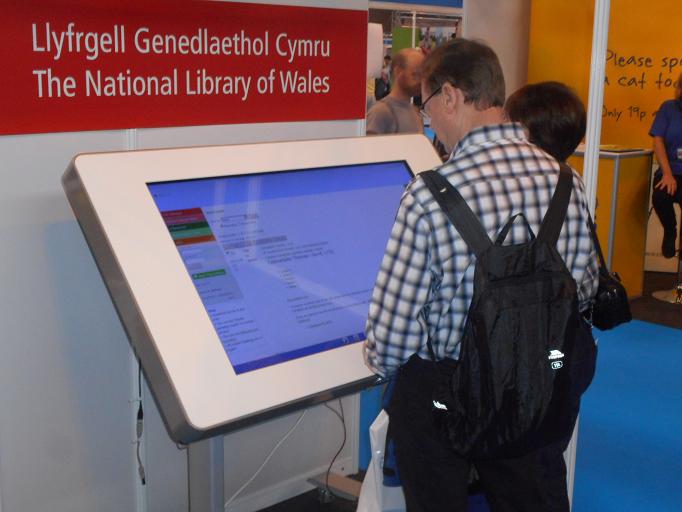 For details on my latest book Down and Out in Scotland: Researching Ancestral Crisis, and my other genealogy guide books please visit http://britishgenes.blogspot.co.uk/p/my-books.html. To commission me for genealogical research, please visit my research site at www.scotlandsgreateststory.co.uk.
Posted by Chris Paton at 14:44